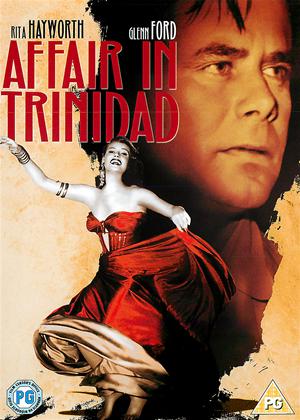 Reviews (1) of Affair in Trinidad

A Spy in Shimmering Black - Affair in Trinidad review by CH

Christopher Isherwood often remarked that if his Sally Bowles had displayed the talent of Liza Minnelli, that small Berlin club would have been the sensation of Europe. Similar suspenders of disbelief are in order at the start of Affair in Trinidad (1952), where, with bongos to the fore, Rita Hayworth performs a dance-and-song number way beyond the means of the premises' dodgy owner.

Such is her skill that to watch her from the rear brings a new meaning to the phrase back projection – a phrase which, in its filmic sense, is also apt, for all of this island sojourn was filmed in Hollywood, with automobile excursions palpably faked. No matter. After all, none of Casablanca was shot on location. So what has brought sundry

people to post-war Trinidad? Rita Hayworth is informed by a police inspector and Embassy offical that her impoverished artist husband has died that very day. Such had been their relationship that, when asked what she said to him at breakfast, she replied, “pass the salt”.

It becomes clear that foul play rather than suicide was the cause, all the more so when her brother-in-law (Glenn Ford) arrives with a letter from his brother dated the very day of his death. He and Rita Hayworth had appeared together, to great effect, in Gilda. If Affair in Trinidad does not reach that level (or depths), it is adroitly done, not least because the jealousy and confusion is fomented by the elegantly sinister presence of Alexander Scourby, who should have appeared in more films. Palpably rich, he is smitten by Rita Hayworth, an infatuation which proves the tragic flaw in his latest plan to augment a nefarious fortune. The mechanics of that need not detain us, any more than the uranium racket of Beat the Devil. As with that terrific film (in which Bogart encounters Robert Morley), the plot is but a vehicle for the barbed exchanges of the characters caught up in it all. Here is a film in which nobody, however lowly the rôle, is superfluous: to name them would make for a catalogue.

Space, though, should be found to mention the effective direction by Vincent Sherman (who almost lived to a hundred) and Oscar Saul who, with James Gunn, worked a story into a screenplay. Watch this on your own and you'll hanker to see it again – with somebody by your side. That somebody will surely say, “you're right – this should be better known.”