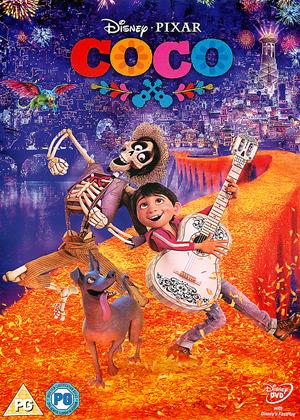 I really enjoyed this film and the animation was great - I watched it twice!

A really good way to talk to children about death and learn about different cultural expressions around this.

Pixar Raise the Bar ( and the dead!) - Coco review by SS

This film is superb. Five Stars, though I would give Coco six stars if I could!

Every aspect of the production is brilliantly done and, this confirms how Pixar has created a new, golden age of animation in cahoots with Disney.

First and foremost, Coco has a great, dynamic story, with a fine dramatic turn of events. Equally, the characters are wonderfully realised , the animators acting their parts to their digital finest. Every nuance and expression is meaningful and this demonstrates a masterclass in contemporary character animation.

The film has a tangible emotional pull as well as the entertaining and humourous. In many respects this is not simply a kids film. It is a film with universal appeal, which patronises no-one in any age group.

It is a Pixar film, like their productions generally, which is intelligent, imaginative, poignant and boldly assured. I loved it. If Uncle Walt was to look down from the afterlife, he'd love it too. It captures the spirit and essence of Walt Disney at his peak.

End up watching films with the grand children, and actually finding them more imaginative, better made, with some sort of storyline going on!

No exploding heads and livers, and no rank swearing all the way through.

I suspect those who actually believe In heaven or er afterlife will 'buy' the conceit of this film more than non-believers like me.

Also, just to add: South American cultures did NOT invent day or the dead celebrations. The ancient British festival of Halloween (Samhain) is at least 5000 years old, for example! So NO cultural appropriation here, as pc persons claim.

Hollywood is keen to pander to ethnic groups, and here it's the Hispanics' turn.

Anyway, the visuals here are superb - not so the mediocre songs.

It starts very twee and pc - and I'm afraid it thinks it's funnier and cleverer than it is - I did not crack a smile, to be honest. It lags badly in act 2. Total focus on impressive animation at the expense of story.

BUT then something happens when the character arcs intersect - NO spoilers, but just to say from this point, the film is sublime.

So a bit of a curate's egg really, Undoubtedly clever but probably confusing for kids - the plot is intricate and adult. Shame the songs are so rubbish!

Very impressive visuals BUT I still think FINDING VINCENT should have won the Oscar, and this film won primarily because in these pc days, it ticks the ethnic boxes. Shame the Oscars are now going to be awarded to less good films and actors JUST because they have dark skin or are female.

This film is beautiful to look at, especially the old lady title character, and has heart to match it. For most animation studios that would be enough but it lacks the comedic moments Pixar is normally so good at. Films like Up and Inside Out had emotional moments but also had laugh out loud moments, something this lacks a little bit.

It's nowhere near up there with other premier Pixars like the peerless Inside Out, Finding Nemo or any of the Toy Stories. It's a bit better than Up which isn't really saying much.

The narrative drifts all over the place, and if you asked me for an "elevator pitch" for the movie where I had to tell you a plot synopsis in 10 seconds I'd really struggle. It's not sad enough or funny enough and there are no characters other than the lead who you care about sufficiently.

Having said that it's visually stunning as always. Anything with a Day of the Dead theme is treat and it's nice to see a Central American story being told.

Remember me! - Coco review by TB

A wonderfully enjoyable and colourful animation about family, dreams and culture.

The storyline is very good and is added to with laugh out loud moments and heartwarming scenes.

Coco has all the elements of a Pixar masterpiece. The animation is dazzling and ambitious, pushing the artists and animators to deliver on something never seen before in computer animation. The world is something else entirely, existing outside of the norm that many animated films would retreat towards. But the critical ingredient lies in crafting a compelling and mature tale that doesn’t hold back on the drama or emotion for being a family film. And when you have a movie about death, Pixar can’t afford to pull back or talk down their audience, even for a movie based on Mexican folklore.

Miguel Rivera is a boy that aspires to be a singing sensation like his idol Ernesto de la Cruz (Benjamin Bratt), a legendary musician and actor. But his family of the Riveras won’t have any talk of music in their household after Miguel’s great-great-grandfather left the family to pursue a career as a musician. The family favors the shoe business to keep them together for generations, but Miguel finds no soul in the soles. He’d much rather pick up a guitar and strum a passionate melody. Deciding to follow his dreams, Miguel runs off to the Day of the Dead talent show and swipes the guitar of de la Cruz.

Now things get a little more complicated. The stealing of a guitar from a crypt places a curse on Miguel, sending him to the Land of the Dead where all spirits congregate as skeletons. The only way to get back to the Land of the Living is to receive the blessing of his ancestors. This shouldn’t be a problem since there are plenty of dead relatives to help him back. They’ll do it, but only if he agrees to renounce his dreams for music. Disagreeing with them, Miguel decides to seek out de la Cruz, as he believes the man may be his great-great-grandfather.

That’s a lot of lineage and rules to unload within the first act, including the importance of being remembered in the Land of the Living and the harsh punishment for being forgotten in the Land of the Dead. This establishes why it’s so crucial that vagabond spirit Hector (Gael García Bernal) will help Miguel so long as the living boy will help him. It’s kinda wordy, but it is necessary for building a strong foundation for this dazzling world and entertaining adventure. Compare that to the chaos of The Book of Life, another animated film about the Land of the Dead that was far too frenetic to understand its vibrancy. Coco doesn’t need to try so hard to be entertaining. It’s a well-thought-out world to house a capable and emotional adventure of family, music, and murder.

Wait, murder!? Does that sound like a Pixar film? For a movie about death, yeah, it does. Some of Pixar’s best movies are the ones that are formed from a mature and honest aspect, as opposed to making everything cute, cuddly and PG enough for that PG rating. There’s no skating around the shocking reveal of betrayal and death, even as ridiculous as Ernesto’s death is for having been crushed to death by a giant bell. Even more hilarious for the spirits is Hector’s death, thought to be food poisoning. The real story is far darker.

And then there are the tears. Pixar has been doing a remarkable job at making parents cry from the faith in your child of Finding Nemo to the lost innocence in Inside Out. Coco may be their biggest offender in this department. Blindsided, a sweet and somber song of a father and daughter will cause a flood in the face for any parent. Fair warning for parents: keep the tissues ready somewhere around the end of the second act.

Ultimately, Coco succeeds at being a family film that’s actually about family and learning to appreciate your heritage, warts and all. The music is a treat for the ears, the decadently lit Land of the Dead is mesmerizing, and the plot has just enough twists and turns to keep any adult interested. Pixar has already shown how expertly they can assemble an animated film that touches on broader themes with Inside Out. Now they’re just showing off with how much further they can go.