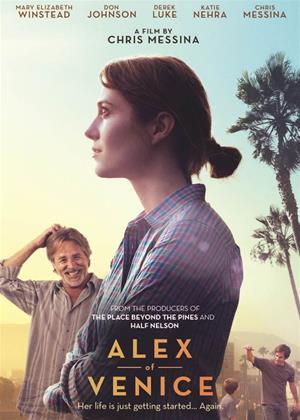 Not released
Celeste and Jesse Forever

Not released
The Trouble with Bliss

Reviews of Alex of Venice

The best aspect of any movie is its ability to transport you to a different world. In the case of Alex of Venice, it places the viewer exactly where you’d expect: within the California setting of Venice beach. And, as expected, it’s a mellow bit of indie quirkiness in its tone and characters. Given its setting, you can expect plenty of talk about environmentalism, acting and consumption of drugs. It oozes that familiar hipster odor. So is there anything unexpected in this predictable setup?

Surprisingly, yes. Our protagonist of Alex (Mary Elizabeth Winstead), even for being a vocal environmentalist, seems to have a firm footing on her life among her family that is lost in the clouds. Her father Roger (Don Johnson) is an elderly actor, struggling for roles while dealing with his memory loss in between smoking joints. Her husband George (Chris Messina) is an artist turned stay-at-home dad that decides to take an abrupt leave of absence to focus on his art. Her sister Lily (Katie Nehra) is a ditzy free spirit that’s a huge party girl and finds Alex’s mom lifestyle a downer. And Alex’s son is just distant enough so that he is part of her world, but not important enough to take up much of her time. Also, Reg E. Cathey hangs around the house as Roger’s lover because...I don’t know, I guess they could afford him for a few days.

When Alex’s life changes with the temporary removal of her husband, she finds herself on the brink as she attempts to restructure her life. She reevaluates her position on her environmental activism and romantic life when she collides with her enemy Frank (Derek Luke). She has to find some compassion for her father who is deeply invested in landing his role for a play. And she has to connect with her son which apparently Lily can do by playing hookie. With so much on Alex’s plate, she’s never really given much of a chance to grow as a character with all her wading through hipsters, parties and drugs.

Chris Messina has been a familiar actor of the independent scene, but this is his first attempt at directing his own project. In terms of tone, he nails the picture with a focus on Alex’s weird world and how she deals with a very frustrating set of circumstances. He even has an eye for California the way he chooses some great shots along Venice Beach. But he also punches up the characters with just a tad too much of the east coast, independent vibe. Every character cusses up a storm in this picture with the exception of Alex’s son who hears all of it. Moments of realism are shattered by scenes like that in addition to laying some rather thick philosophy on a child at that age. I’m aware that kids are smarter than we give them credit for, but I doubt any 10-year-old would be pondering the wonders of age and allegory after seeing an adult play.

The kid seems perfectly fine, but mostly of his own accord seeing as how rarely these characters rely on one another. Don Johnson plays a likable enough codger, but he’s seen as a burden by everyone that his growth has to be on his own with some minor encouragement by Reg E. Cathey. Messina just sort of finds himself off screen and Katie Nehra doesn’t really develop at all.

While Alex of Venice does feature a solid collection of characters, it often becomes lost in its quirks and is ultimately uneventful. The ingredients are all there and rather than mixing them well, director Chris Messina just sort of lays them out neatly next to each other. I liked a lot of these characters much more than I thought I would for this type of picture, but just ended up being frustrated at them never living up to their potential. Rather than evoke some real drama that is present in small nuggets, all of the characters just fulfill the basic requirements for a comfy indie dramedy. And, honestly, I’m getting tired of these simple indie family movies being comfy. I want to be on the edge of my seat to see how characters will grow on screen - not have underdeveloped ones just sort of fall into a happy ending. And I thought big, commercial dramas were the ones that were supposed to feel artificial.