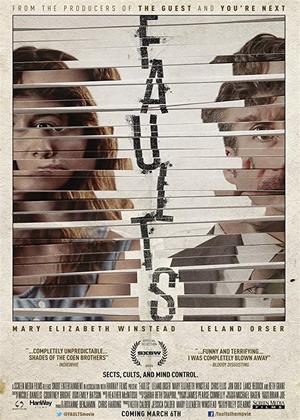 Synopsis:
Claire (Mary Elizabeth Winstead) is under the grip of a mysterious cult called Faults. Desperate to be reunited with their daughter, Claire’s parents set out to recruit Ansel Roth (Leland Orser), one of the world’s foremost authorities on cults and mind control. But Ansel’s speciality, deprogramming cult members and returning them to their families, is not an exact science, and a series of financial setbacks has left him in debt to his manager. Ansel warns Claire’s parents that his deprogramming methods are risky and expensive, but they agree to hire him to kidnap and deprogram their daughter. Claire quickly reveals herself to be a formidable challenge.
Her belief is unshakeable, and her logic is undeniable. A battle of wits develops between the two as they delve deeper and deeper into each other’s minds.
Actors:
Leland Orser, Mary Elizabeth Winstead, Chris Ellis, Jon Gries, Lance Reddick, Beth Grant, Cruz Flores, Suzan Averitt, David Chandler, Leonard Earl Howze, Davey Johnson, Kellie Matteson, Amanda Saunders, Nicholas Tucci, Shira Weitz
Directors:
Riley Stearns
Writers:
Riley Stearns
Genres:
Comedy, Drama

Faults is the type of strange film that never settles on a tone, but never stops building. It’s an intriguing project to watch take shape as dark humor and eerie psychological horror compromise its construction. You’re never quite sure where it’s going or what it’s building towards, but I remained transfixed on every brick it placed within its tale of mind control and cults. For all I know, the film itself could be mind control implanting some Manchurian Candidate hypnotic suggestion into my brain the way it wrapped me in to its folds. If its goal was to make me admit that director Riley Stearns’ first film is a surprisingly exceptional mix of black comedy and thriller elements, it’s certainly doing its job.

Before delving into the plot of a struggling cult-deprogrammer meeting his match, we’re given a reason to be interested in these characters. Ansel (Leland Orser) is mess of a cheapskate on the last legs of his limited fame. His books are not selling as his failure to deprogram a cult follower - which led to her death - has reduced him to tiny seminars at small hotel conference rooms. He’s lost his edge the way he can barely defend himself when attacked for his words or forcibly drug kicking and screaming from a restaurant meal he cannot pay for. Though Ansel is pathetic, you don’t feel that he’s a cheapskate or entirely deserving of his tragic career developments. He genuinely wants to help people and has a solid method for trying to deconvert the crazy followers. But, of course, trying to make some money and pay off his intimidating agent becomes a heavier focus.

So desperate for funds that he’s stealing everything that isn’t nailed down in his hotel room, he takes on a job from a poor old couple who just want their daughter back. After much reluctance, Ansel finally agrees to help lift their young Claire (Mary Elizabeth Winstead) from a doomsday cult. Though he may seem amateur with his methods of kidnapping Claire and locking her in a hotel, he approaches the questioning as a seasoned professional if not a little worn around the edges. The parents doubt his procedure, but Ansel addresses them more seriously and collected than he’s been in years. Claire ends up being one of his strangest cases yet as if she’s an otherworldly character from the Red Room of Twin Peaks. She and Ansel proceed to battle each other’s intelligence by slowly digging into both their psyches.

The story starts off semi-comedic for the lovable dope character of Ansel, but then progresses into a more surreal picture. Unexplained occurrences and strange visions make Ansel more paranoid, questioning if his methods are working, if he’s out of his league or if Claire’s crazy religious babble holds water. The more time they spend together, the more weird their relationship becomes. It’s not so much about the truth behind all the ludicrous God-communicating talk, but how well Claire can manipulate others.

This is what makes the performances of Leland Orser and Mary Elizabeth Winstead work so well on screen - they’re both trying to sell each other on their meanings of life with wise words and interesting behavior. Though Orser has an undeniably likable presence as the pathetic down-on-his-luck speaker, it’s Winstead who dominates in the second act as a woman of mixed emotions and loyalties. She cries upon seeing her parents again, but retorts about their choices for her clothing. She fears Ansel at first, but quickly begins to crawl into his skull the more she becomes infatuated with him. She even manages to haunt Ansel’s vision with some playfully dark and surreal dreams.

Faults is an uncompromising examination of free will that generates equal parts laughs and creeps. For taking place in a hotel room for the majority of its running time, director Riley Stearns manages to churn out a tale with unique characters that pin you to your seat. You can feel the desperation emitting off Ansel in his dirty jacket and sweaty appearance as a used car salesmen hoping to make some cash by cleaning a crazy. You can sense a deeper motive behind Claire’s true intentions as well the way she speaks and acts around others. It’s that attention to the bizarre nature of this scenario that elevates this indie production far past its budget to develop something so engaging yet so hard to pin down. Best I can do is relate the film as if David Lynch directed an episode of Breaking Bad, which doesn’t even do the film justice now that I write it.