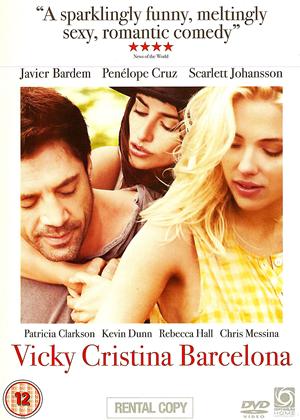 I am disappointed with myself for giving Woody Allen another chance. It has some stars in it (and that's the point), and Barcelona is a photogenic city, but the weak plot, self conscious voiceover and contrived sexual tension are just too much. It has the director's fantasy-laden paw prints all over it. On the positive side, of course all four main actors do what they can - and they all look good (again that's the point) AND there was one laugh out loud moment. One.

I enjoyed this film more than I expected mainly because Woody Allen was not as obvious a presence in it as he is in many of his other films. Scarlett is gorgeous to look at and for once there is some serious eye candy for the girls in the shape of Javier Bardem whcih perked this film up for me.

As usual with a Woody Allen film it's all about the neurotic rather unreal characters and their take on relationships rather than anything much actually happening but the sumptous setting of Barcelona gives this film a luscious extra dimension which takes it above average.

Penelope shouts too much and goes over into a latino cliche, but Javier's wardrobe is worth a watch on its own.

I loved this film, didnt expect to be that impressed. This is every womens dream..very romantic and interesting. Felt like we really got to know all the main characters. Really would recommend. Funny and Sad in different places.

i try and I try... - Vicky Cristina Barcelona review by CP Customer

... to like Woody Allen, but years later it still is just flat, superficial, self important filmmaking. The overly explained voice over means that the incredible actors are only permitted to do much less than they are capable of... and are simply cardboard cut outs of the uninteresting people the film claims to dislike. Keeping the audience at an arms length without allowing a moment to think or take in ideas, rather it is explained moment by moment - the romance and feeling is sucked out at every turn where it may be allowed to briefly bloom. Take it off your list - now.

Not my normal cup of tea but was enjoyable enough. Enjoyed the actors in the film. Even if there’s not much too it. Worth a watch if you like the big names

Life is full of pain. And this is a chance for something special. - Vicky Cristina Barcelona review by Steve Mason

After London, Woody alighted on Barcelona for another beautiful, touristic vision of a city. Through the noughties, about every third Woody Allen film was being critically heralded as a return to form halting a declining trend. This comedy-drama was one of those. It was a box office hit and the Oscars came calling again.

It's an analysis, or even an illustrated essay on the nature of sexual/romantic desire. The film is a series of loose, transient triangles forming between Vicky/Rebecca Hall, a pragmatist looking for emotional certainty; Cristina/Scarlett Johansson, an impulsive romantic seeking intensity and novelty, and a pair of volatile Spanish artists played by Javier Bardem (unorthodox and passionate) and Penélope Cruz (crazy and passionate).

It is a questing film that looks for a way to be free of the social and psychological traumas that have haunted the romances of his characters for decades. The leads are beautiful, the locations and photography are gorgeous. And as ever with Woody Allen there is nicely judged ending.

This is a really funny, quite touching and sexy romcom directed by Woody Allen and set in Spain, one balmy summer. Vicky (Rebecca Hall) and Cristina (Scarlett Johansson) are two old friends who spend a summer in Barcelona. There they meet the charismatic artist Juan Antonio (Javier Bardem) who seduces both of them. But as the heady mix and match of the three of them gets complicated, into their lives comes Juan's ex wife, Maria Elena (Penélope Cruz), a tempestuous and unpredictable woman and Vicky's boring but safe fiancé Doug (Chris Messina) arrives from the US intent on marrying Vicky in Spain. All of their lives become very tense and confused as who loves who gradually reveals itself. Cleverly scripted and with great performances, not least Cruz who won an Oscar here, this is one of Allen's more appealing films of late and there's something very original about the convoluted relationships that the plot follows. It's also a very funny film too. If I have one big criticism is that the ending is a bit of a damp squib but that said this is still worth checking out if you've never seen it.