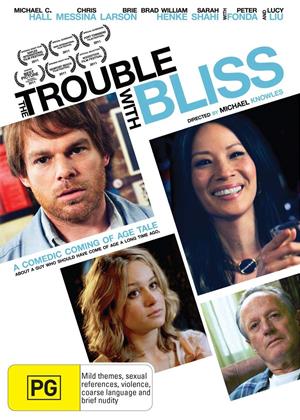 Synopsis:
"The Trouble with Bliss" is a comedy/drama about 35-year-old Morris Bliss (Michael C. Hall), who is clamped in the jaws of New York City inertia: he wants to travel but has no money; he needs a job but has no prospects; he still shares an apartment with his widowed father; and the premature death of his mother still lingers and has left him emotionally walled up. When he finds himself wrapped up in an awkward relationship with the sexually precocious, 18 year-old daughter of a former high school classmate, Morris quickly discovers his static life comically unraveling and opening up in ways that are long overdue. It's a coming of age tale about someone who should have come of age long before.
Actors:
Michael C. Hall, Peter Fonda, Lucy Liu, Brie Larson, Glenn Kubota, Brad William Henke, Chris Messina, Mary Goggin, Melanie Torres, Sarah Shahi, Joshua Alscher, Liz Holtan, Kate Simses, Dana Raja, Scott Johnsen, Carl Villa Roman, Gameela Wright, Christian Campbell, Monique Dupree, Curtz Jackson
Directors:
Michael Knowles
Writers:
Michael Knowles, Douglas Light
Aka:
East Fifth Bliss
Genres:
Comedy, Drama, Romance

Reviews of The Trouble with Bliss

Michael C Hall stars as Morris in this bizarre indie drama about a thirty five year old man without a job who still lives at home with his widowed father (Peter Fonda). The film covers a brief period of his life in which he finally seems to realise how much of it he is wasting.

With an allowance from his brusque and rather cynical father (who can blame him really) Morris Bliss spends his days drinking with his friend NJ and half heartedly searching for a job; things suddenly change however when chance thrusts Stephanie (Brie Larson) into his path. A fairly strange girl in herself, Stephanie also turns out to be the daughter of Morris’ high school buddy, Steven “Jet ski” Jouseki.

Rekindling his friendship with Steven Morris struggles to balance his secret relationship with Stephanie and the new life that is opening up before him. Torn between the advice of his friends, his own dreams and Stephanie’s unusual brand of romance Morris must, for the first time in his life, make a decision of his own.

As another slightly off kilter indie drama The Trouble with Bliss is fairly average; it’s neither funny nor tragic, shocking or moving, it manages to be both reasonably predictable and adequately enjoyable in a single move. The acting is of a high standard, as is only to be excepted from a cast that includes Hall – whose starring roles in both his Showtime and HBO shows Dexter and Six Feet Under highlight the vast emotional range contained in his personal brand of dead pan monotony.

If it were not for the performances of both Hall and Fonda The Trouble with Bliss would verge on boring, but their choice to slum it in such a mediocre movie is in fact its one saving grace.