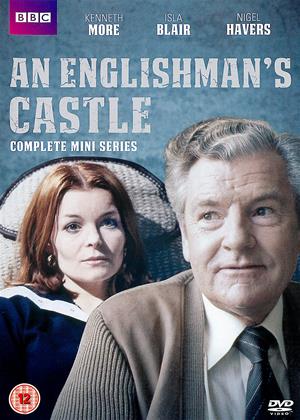 Synopsis:
An Englishman's home may well be his castle, but it would be a very different castle indeed if Germany had won WWII. Set in an alternate 1970s on an Earth where Germany won the Second World War and is now occupying England, Peter Ingram (Kenneth More) is the lead writer of a popular soap opera set in Blitz-era London. Ingram's life sees little adventure. He knowingly turns a blind eye to the realities of local Nazi rule, opting for the easy life. After the inclusion of a Jewish character in his television series is met with strong objection, his eyes finally begin to open. And when the woman he loves (Isla Blair) reveals that she was born a Jew, he has a difficult decision to make.
Will Peter join his lover in the Underground resistance or continue to lodge his head firmly in the sand?
Actors:
Kenneth More, Isla Blair, Anthony Bate, Kathleen Byron, Noel Dyson, Rob Edwards, Fiona Gray, Nigel Havers, Peter Hughes, David Meyer, David Roy Paul, Brian Peck, Philip Bond, Anthony Stafford, Derrick Gilbert, Norman Hartley, Derek Holt, Edward Kalinski, Jonathan Kydd, Ian Munro
Directors:
Paul Ciappessoni
Producers:
Innes Lloyd
Writers:
Philip Mackie
Studio:
BBC
Genres:
British TV, TV Dramas
Countries:
UK

Reviews (1) of An Englishman's Castle

This 1978 3-parter may be a bit dated but it is a great watch. Classy cast incl Kenneth More most famous for playing Douglas Bader in 1956 classic 'Reach for the Sky' - a must-watch, that, as is the Dambusters. I did not see it at the time as it was probably on late and I was a child! Never repeated as far as I am aware, possibly because of some gross sexism and comments to the female secretaries etc.

Fun to see Nigel Havers (born 1951) looking younger than his 27 years here - I watched this at the exact same time Mr Havers was presenting the Repair Shop on BBC1 as his now 70 year old self LOL.

This has the same workmanlike director as Shoestring - but the premise is always fascinating. WHAT IF Germany had won WWII or a peace had been reached with Britain. Nothing original in that as many MANY novels and films and TV series imagine it (1994 novel and film FATHERLAND; 1962 novel THE MAN IN THE HIGH CASTLE; .Films like WENT THE DAY WELL from 1942 a must-see; SILENT VILLAGE 1943; IT HAPPENED HERE from 1962; THE EAGLE HAS LANDED 1976; so many).

This TV drama has an unusual premise - a TV drama about the events of 1940 when the Germans won and invaded Britain is being made and More plays its writer. His sons and the resistance are the sub-plots but the main theme is what the main character played by More will do and which side he will choose.

Remember this was written/made in 1978. The country was in chaos with strikes everywhere - binmen, bakers, the lot! Oil crisis in early 70s. UK had to go cap in hand to IMF for a loan. We were the sick man of Europe and some thought there COULD be an uprising from the far left or far right - both were very vocal and active in late 197os and an uprising or coup was a real possibility, unlike now. That is the context.

4 stars. I enjoyed it. Youngsters may find it too slow for their puppy attention-spans though. Not many whizz-bangs and fast0-edit action here.