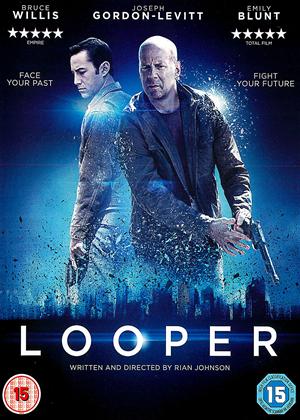 Synopsis:
In the year 2044 time travel has not yet been invented. But in 30 years it will have been... Joe (Joseph Gordon-Levitt) works as a looper, a futuristic assassin who eliminates targets sent back in time by a criminal organisation. The only rule is that you do not let your target escape -even if that target is you. The rules are put to the test when Joe is called upon to "close his loop" and assassinate his future self (Bruce Willis). In failing to pull the trigger, so begins a desperate race against the clock as Joe begins to unravel his own future and older Joe's past.
Actors:
Joseph Gordon-Levitt, Bruce Willis, Emily Blunt, Paul Dano, Noah Segan, Piper Perabo, Jeff Daniels, Pierce Gagnon, Qing Xu, Tracie Thoms, Frank Brennan, Garret Dillahunt, Nick Gomez, Marcus Hester, Jon Eyez, Kevin Stillwell, Thirl Haston, James Landry Hébert, Kenneth Brown Jr., Cody Wood
Directors:
Rian Johnson
Producers:
Ram Bergman, James D. Stern
Writers:
Rian Johnson
Studio:
E1 Entertainment
Genres:
Sci-Fi & Fantasy

Reasonably enjoyable - but no masterpiece - Looper review by RP

The plot is silly: undesirables from the future are sent back via time travel to the present, where they are assassinated by persons known as 'Loopers'. Young Joe (Joseph Gordon-Levitt) is a Looper, busy doing his job when his next victim proves to be his future self, old Joe (Bruce Willis). Old Joe doesn't take kindly to this and hops it, leaving young Joe to track him down and finish the job. Err, that's about it.

It's confusing in parts and the TK ending is all a bit silly. The female roles are poorly done and include Brit actress Emily Blunt attempting a dodgy USAnian accent. Overall, the film is reasonably enjoyable - but it's certainly no masterpiece. I found it all very average and rate it as 3/5 stars.

[Aside 1: I'm not a great fan of the so-called 'Extras' included with DVDs, but it's worth watching the 3 small items that cover how the musical score for the film was created. I didn't realise it was such a creative exercise]

[Aside 2: if you want to see a thinking man's film that shows the complex paradoxes of time travel, check out the excellent low budget 'Primer']

And then? - Looper review by Steve

Time travel film for computer engineers, surely proves that not everything that notionally make sense in a flow diagram is a suitable subject for a cinema release, and really, a multiverse what-if film too far. The talented Joseph Gordon Levitt, and Bruce Willis, chase versions of themselves through the future. There was a memorable scene in a field of corn that made me wish I was watching North by Northwest.

Tying to cram a complex story into the feature-film format will always mean compromises. Thankfully Looper makes a good attempt at striking a reasonable balance, in this regard. There are a few underdeveloped parts of the backstory, but in the round, this is an enjoyable addition to the time-paradox genre...

Set in the not-so-distant future of 2044 when time travel is possible and a young drug addict takes a job as a hit man for the mob who send their victims back in time to be murdered and disposed of so that the authorities can never track them down Looper is the story of Joe, one of these mob assassins or “Loopers”, who finds himself confronted by his future self who has travelled back in time to prevent an telekinetic dictator from sending other Loopers from 2074 to be killed by their younger counterparts.

Confused? Yes I was too.

So, the things you need to know are that Joseph Gorden-Levitt and Bruce Willis play the older and younger versions of Joe, Willis’ character now living a quiet life in China with his wife and Levitt’s character besotted with Sara (Emily Blunt), a young woman who lives on a farm with her psychically talented son, Cid.

With all of this information in place a complex and action packed science fiction-thriller ensues that is good exercise for both the mental and visual muscles.

Fear not however the film slows enough in places to allow you to keep up to date with the overlapping, time hopping storyline and there’s just enough action and shooting to allow you to switch your brain off every now and then.

What’s most impressive about the piece however are the casting choices of Levitt and Willis as Joe’s alter egos. The experienced and more self contained character played by Willis is contrasted well against the more impulsive (and frankly unlikable) Levitt. A particularly interesting scene comes early on when Willis and Levitt size one another up in a Kansas diner, Levitt’s nose prosthesis a fabulous touch to help him mimic the older actor, and their contrasting profiles only further complimented by their contrasting behaviour.

I was pleasantly surprised by Looper although its pace becomes a little too slow in places and there wasn’t really enough set up of the tyranny of the future dictator to provide Willis with any real motivation and drive; overall however it was a refreshing twist on the typical Hollywood action film.