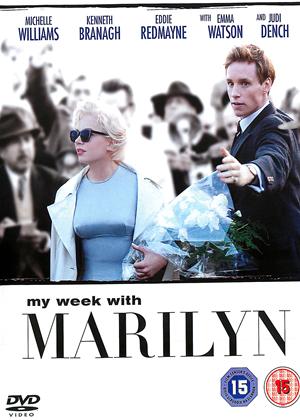 Synopsis:
In the early summer of 1956, 23 year-old Colin Clark (Eddie Redmayne), just down from Oxford and determined to make his way in the film business, worked as a lowly assistant on the set of 'The Prince and the Showgirl'. The film that famously united Sir Laurence Olivier (Kenneth Branagh) and Marilyn Monroe (Michelle Williams), who was also on honeymoon with her new husband, the playwright Arthur Miller (Dougray Scott). Nearly 40 years on, his diary account The Prince, the Showgirl and Me was published, but one week was missing and this was published some years later as My Week with Marilyn - this is the story of that week.
When Arthur Miller leaves England, the coast is clear for Colin to introduce Marilyn to some of the pleasures of British life; an idyllic week in which he escorted a Monroe desperate to get away her retinue of Hollywood hangers-on and the pressures of work.
Actors:
Michelle Williams, Eddie Redmayne, Kenneth Branagh, Julia Ormond, Pip Torrens, Geraldine Somerville, Michael Kitchen, Miranda Raison, Karl Moffatt, Simon Russell Beale, Toby Jones, Robert Portal, Philip Jackson, Jim Carter, Victor McGuire, Dougray Scott, Richard Attlee, Michael Hobbs, Brooks Livermore, Rod O'Grady
Directors:
Simon Curtis
Producers:
David Parfitt, Harvey Weinstein
Writers:
Adrian Hodges, Colin Clark
Others:
Judi Dench, Jill Taylor, Jenny Shircore
Studio:
Entertainment In Video
Genres:
British Films, Drama
Countries:
UK

Reviews (6) of My Week with Marilyn

Here's yet another British film aimed squarely at the US market (like The Queen and the awful The Iron Lady). It's all well-acted (by Brit character actors) and pleasant enough. Personally, I couldn't buy the constant sympathy for Marilyn Monroe - people who are unreliable druggies are not beautiful or lovely, just annoying and let everyone down. Also, one wonders if Olivier et al actually said the lines they speak here (buy luckily they are all dead so cannot sue!). This film makes me want to watch The Prince and The Showgirl though...... But really, I suspect this whole film and the book is based on is all some old posh bloke's wish fulfillment fantasy: he wrote it when he was in his 60s. It always happens - look at artists and other writers. Dirty Old Man Syndrome. Nothing more..........I am also getting more and more irritated at how the British film industry seems to have its snout permanently stuck up America's blowhole. Why do all British people in movies either have to be VERY upper class - utter toffs - or criminals and bad guys: if black people got that treatment it'd be called racist! Having said all that, I give this movie 3 and a half - for some nice acting and funny lines. Just do't take it too seriously or think it is fact: ditto for The Queen. The Iron Lady, Hollywood war movies and other figments of the imagination.

Light film - My Week with Marilyn review by JD

You can't believe that it is Marilyn but as a film in itself it is quite interesting. A bit like Notting Hill in that it is about celebrity meets ordinary guy. The acting is OK and the film flows well, I think Eddie Redmayne kept it together and kept the film entertaining.

Fact or fiction? - My Week with Marilyn review by Pete W

The principal problem with this film is that any attempt to portray the film star Marilyn Monroe is doomed to failure - only the real Marilyn could do that. The real Marilyn comes across in this film as manipulative and insecure - and who knows, she may have been. Branagh is good as Olivier - sometimes you have to look twice to check that it isn't Sir Larry himself - but more could have been made of the Vivien Leigh side of the story. Judi Dench does another of her little cameos as a socialist and sympathetic Dame Sybil Thorndike. Eddie Redmayne is OK - he has exactly the right background to play Colin Clark - but his eyes have only one expression - that of a halibut on a slab. As result any attempt at a smile just looks psychopathic.

Enjoyable 'true' story - My Week with Marilyn review by PC

Not sure why all the negative comments about Michelle Williams' portrayal of Marilyn Monroe, I thought it showed all the different aspects of her character, insecure but still quite manipulative. Eddie Redmayne plays Eddie Redmayne and Kenneth Branagh is very good as Laurence Oliver. I think the whole story has to be taken with a pinch of salt, it is one person's view of what happened that cannot be verified by anybody else. I enjoyed it but mainly as an interesting look at film making at that time.

Karaoke - My Week with Marilyn review by CP Customer

Appalling, totally unnecessary version of Ol' Black Magic at the end of the film ruined it. Reminded me of why this was not a fictional account but a karaoke version by an actress not up to the gravitas of the role.

Is it fact or just wishful thinking? - My Week with Marilyn review by RP

Hmm... I'm left with the question of whether this is fact or just wishful thinking. Back in 1956 posh young Colin Clark wangles a job (courtesy of family connections) as odd-job-boy / gofer / 3rd Assistant Director on the production of 'The Prince And The Showgirl', the film directed by and starring Laurence Olivier – and of course, Marilyn Monroe. The film tells the tale of one week during the production when Colin takes La Monroe sightseeing (countryside, Windsor Castle, Eton College, skinny dipping in the Thames) + spends the night chastely in bed with her. A likely tale! Still, it's all very prettily done, the acting is OK-ish, but suffers in comparison to the real thing. Kenneth Branagh comes across well as the stage actor that he is and plays Olivier as an irascible director. Judi Dench is excellent as always. But the portrayals of Vivien Leigh and (to a lesser extent) Marilyn Monroe don't seem to have that star quality and presence about them. Michelle Williams does a workmanlike job as Monroe (and indeed won a Golden Globe and also an Oscar nomination for her performance) but I found it a bit of a shallow portrayal and a re-hash of troubled star / pill popping / troubled childhood / little-girl-lost characterisation that perhaps we've seen too often before. It's enjoyable enough, well photographed in a pretty-English sort of way, but it all seems a bit lightweight. 3/5 stars. [Aside: The film is based on the diaries of the real-life Colin Clark, son of Kenneth Clark (of 'Civilisation' fame) and brother of Alan Clark, Conservative MP and of 'Diaries' fame. No wonder he managed to wangle a job – the Oliviers were friends of the family!]

My Week with Marilyn review by Alyse Garner - Cinema Paradiso

Nominated this week for several BAFTA’s My Week with Marilyn tells the story of the relationship between British actor Sir Laurence Olivier and American star Marilyn Munroe as they filmed The Prince and the Showgirl a 1957 movie filmed in England.

The story is based on the true story of Colin Clark, younger brother of prolific political writer Alan Clark, who like his older brother kept a diary in which he describes an intimate and one of a kind week spent almost alone with Marilyn in a holiday cottage.

Impressively portrayed by Michelle Williams Marilyn is as seductive and enchanting as you would expect her to be; Williams is easily the star of the piece, as she must be in order to pull off such an iconic role. Although the platinum blonde hair and pouting red lips add to the visage what is more potent is the way in which she embodies the sexuality, gentleness and fear that Munroe has become so known for; you find yourself leaving the theatre seeing Munroe not simply as a 1950’s sex object but as a deep and troubled person, so excellently portrayed that you find yourself longing to reach out and comfort her.

The movie is incredibly entertaining and moving, almost overwhelmingly so, it gives a touching insight into the truth behind the screen icon that was Munroe; it is subtle and coy, insinuating sexuality without depicting definite images of sex. It gave me a whole new outlook on the physicality of Munroe, a woman whose body was and has been lusted for almost unconditionally, who in fact lacked the confidence and self esteem to truly be the sexual predator she was sometimes made out to be.

A sweet, charming and moving picture.