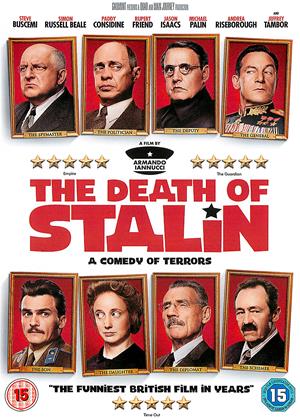 Reviews (30) of The Death of Stalin

Highly Disappointing - The Death of Stalin review by JS

Against much opinion I found this film to be essentially very boring with a Monty Python/Daily Mail view of Russia and actually quite offensive to all those millions of people who must have suffered immeasurably under Stalin's rule. OBVIOUSLY I know it is a black comedy, and therefore to be taken as such, but essentially it spins out one joke-what it actually must have been like to be there as a member of the "Government" when Stalin died and how to react in such bizarre circumstances- and spin this out for however how long. The West unfortunately has a completely one sided view of Russia and Eastern Europe most of the time and all films like this will do is to play to the prejudices and stereo types of "little Englanders" in reinforcing their brain dead views.

8 out of 26 members found this review helpful.

Ignore the haters. This is a very good film. - The Death of Stalin review by LH

Wow. I guess humour is a highly personal thing given some of the po-faced reviews above. I know that this film has been banned in Russia and this itself drew me to want to watch it! (One just wonders about the independence of some of the comments above... That's all I'll say on that.)

I loved this film. Very funny in a very dark way, which I guess won't please all of the people all of the time, but definitely appeals to my sense of humour. I found the cast to be absolutely first rate. The accents didn't bother me at all... What would have annoyed me would have been any attempt at cod Russian accents. I loved the way the film unfolded and the twists and turns of the political intrigue. Whilst I accept that it's probably not entirely factually correct, it doesn't claim to be a documentary. It's a comedy. It does bring home the horrors of Stalin's brutal paranoid reign of terror and the purges and the families destroyed at the stroke of a pen on to a list. It has made me want to learn more about this period of history and I fully intend to.

Black Comedy - The Death of Stalin review by JD

Superb movie. Very clever take on an historic event, the death of Stalin. Very, very funny, the cast are great ( special mention of Michael Palin ) and full use of black comedy to highlight the atrocities of the Regime.

Some people seem to have taken this film as a realistic portrait of the events..which, of course it is not..it is a comedic version of what might have happened, given what we have since learned of the nature of the Stalin regime.

A film that makes you laugh, and then question your humanity - The Death of Stalin review by Champ

This might be the blackest of black comedies that I've ever seen - but to call it a comedy pigeon-holes it and undersells it.

I really enjoyed it, but I felt a little uncomfortable in my enjoyment. Some of the events referenced and depicted are so awful, that laughing at the way they are satirised just feels wrong! But it's a sign of the supreme skill of Armando Ianucci's writing and directing that he's managed to pull this off. I should stress that this film is much more than a satire, and I while Beria, Kruschev, Molotov and Zhukov are names I knew from history, I didn't know about Malenkov, or Stalin's son and daughter, who I then went and read about them.

In a way it's a lesson from history, about how power can utterly corrupt and destroy the things it professes to value.

Watch it - and forgive yourself when you laugh!

Theatre of the Absurd - The Death of Stalin review by DW

Four rather than five stars because, I think throughout I felt somewhat guilty about laughing so much, if that comment makes sense to anyone other then me! Over the years I've read quite a lot of Soviet literature (Solzhenitsyn, Sholakov and others and recently read The Noise of Time by Julian Barnes in which Barnes tells of the composer Dmitri Shostakovich's persecution by Stalin and the Politburo, absolutely contemporary with this film).

Black as the subject is, I am sure that Iannucci recognised the potential for presenting this event as a ready candidate for a Theatre of the Absurd production and, with his innate skills as well as a brilliant cast, I truly think he has brought it off very successfully indeed.

These times were not at all funny, and the victims of Stalin's terror could be counted in their millions. To Iannucci's credit, I really think at no time during The Death of Stalin are we left in any doubt about the cruelty, the sheer ruthlessness which kept Stalin, Beria and their cohorts in power for so long. I can't think of any other approach than this, though, that would show them up for the despots they were.

If you're expecting a light hearted comedy, then this isn't for you. This film is not a comedy in any shape or form, what it is, is a satire which takes Politics of the past and draws very strong parallels with the political arena of today, making very dark satirical comment along the way. One can very clearly see Putin's double in here as Kruschoff and the contradictions of ousting one regime, only for it to be replaced with something much, much worse! Everyone vying for power, working their own agendas, back stabbing, making back door deals, ten constantly moving goal posts. No attempt is made to make the very English, American and European accents. no nasty fake Russian accents, just brilliant acting, excellent satirical delivery, lots of things going on in the background, strong script and top direction. Like a heavily political Fawlty Towers, set in the Kremlin! If you prefer wham bam action movies, thin on plot, high on action, or fake comedy, then this probably isn't for you. But if you enjoy the more intellectual style of cinema, then this is worth a try. Personally i thought it was one of the better films of the year and enjoyed it from beginning to end!

Divides opinion - The Death of Stalin review by HM

Absurd, however, the boorish behaviour of the Stalin entourage was born out by no lesser witness than General Alan Brooke Chief of Staff during Britain's war effort, who saw first hand the ludicrous peasant culture of the people involved whilst at dinner with them. Drunken, aggressive and gorging on food whilst their people starved. Read his memoires of world war 2, you will be surprised. This oafish bunch are of course a send-up, but it wouldn't take much effort to do it.

As for Beria, the NKVD head, his viscous personality was understated in this movie, a total psychopath having footballers sent to the gulags for poor performance etc. Nut case.

I found the film entertaining and this shower deserved satirical treatment, it is a question of whether the satire is milder than the truth!

To be able to create a comedy about such a violent and shocking time is quite a task and they have succeeded. I think having the actors using whatever accents they liked is stroke of genius and perfect casting. I may need to buy this one for repeat viewing.

Painfully amateur - The Death of Stalin review by RD

This is a bit like watching a third rate stand up comedian die on stage, you feel for the actors and it's all quite embarrassing.

There's lots of laddish cockney swearing and Stalin appears to be based on Ray Winstone's cockney gangsters but this Stalin not as funny or believable.

I'm not sure how anybody could have classified this as a comedy, as there appears only to be a soft attempt at humour. For instance there's a protracted scene early on where two Radio Moscow staff argue over the details of a misheard phone call. It starts off as a good attempt at a funny situation, but quickly fails and then is drawn out for far too long after the thing has died.

There is an odd mixture of the violence of Stalin's torturing and trying to be funny about it. This is difficult at the best of times and whereas Tarantino manages this well, this lot are way below that standard, and the film becomes quite a sad mess. It all comes over as a very amateurish - and not watchable. We gave up at the death of Stalin, we couldn't take any more. One of the worst films I've seen for a long time.

2 out of 10 members found this review helpful.
Show more