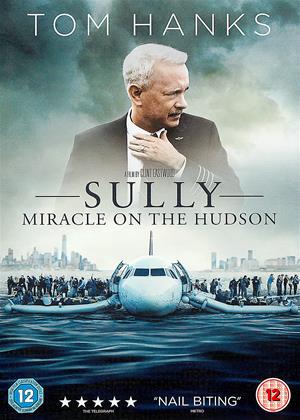 Maybe a bit stylised? Not sure Sully was given such a grilling as they make out. Makes the aero authorities look like idiots, with a personal vendetta against Sully.

Any event such as the downing of 155 folks on a plane would be taken very seriously by the aero industry, as would a policeman firing a gun, or crashing a car into somebody.......well in England anyway..........

Film industry always portrays highly professional people as a bit wobbly, if not unstable. Talk to a pilot, or a member of the SAS etc. They are calm and controlled under pressure, that is a natural selected talent, plus rigorous training and application.

Remarkable performance by both character and actor. - Sully review by JG

This is a docu-drama of a real event that stunned me at the time, the Hudson river ditching. I have always had an interest in aviation and have followed enough stories to know that planes coming down in water is not normally a good ending. When the pilot pulled off a feat that had not been successfully done before, without loss of life, he went into the record books and it is right that this should have been made into a film.

Eastwood and Hanks, particularly Tom Hanks, have done a good job. We get a snapshot of the character of Sully Sullenberger and how he became what he was, so that he was the right man in the right place when this happened. What is not so good is the portrayal of the Air Accident Inquiry. I am sure there was pressure on them from the airline and aircraft manufacturers to find "pilot error" as he cause, but Air Accident investigators are professionals and although they would have pursued this line of inquiry, they would not have done it in the adversarial and dishonest way portrayed in the film. Perhaps this was done to make the film appeal more at the box office. The actual events were amazing enough, they didn't need tarting up. Nevertheless the film was otherwise faithful to the real events, (I watched a BBC documentary shortly after the event). There were three items that didn't come fully out, they were covered but could be missed if you were not aware.

The first was that he started the auxiliary engine very early, before normal in the check list. This restored power as there is limited life in the batteries and gave a little bit of forward thrust, not enough to fly and completely offset the drag, but enough to give a few more seconds of precious time.

The second is that there were stop cocks that should have been closed prior to ditching but this was not done, so they plane sank before it should have. The reason was that the instruction to do this was at the end of the check list and due to their low altitude they did not have time to get that far. The check list they had was not adequate for the job they had to do. This is the responsibility of the aircraft manufacturers. Hopefully this has now been addressed, that is why we have Air Accident Inquiries.

The third thing, shown in the film but not commented on, was the nose-up attitude he used when ditching. Planes always descend nose up to maintain lift but it is normal to return to horizontal at touchdown so that the plane can run along the runway. Water is different, as soon as any part of the plane touches the water it experiences a sudden stopping force on the lower side. Due to the momentum of the heavy plane, the upper part wants to continue and a turning moment is applied that flips the plane over with disastrous consequences. He came down into the water nose up so that the plane surfed like a boat. He was not taught to do this, he just did it from his experience. This last item is the most important as it shows that his habit, of anticipation of what could go wrong and how to prepare for it, is what lead the outcome. A real hero.

The film is worth watching, is as good as any other good drama, and not a boring documentary. I would happily watch it again.

It would have been better if it was more accurate... - Sully review by CW

It's a good film - except rather inaccurate on key details like how Sully was treated by the NTSB. It would have made a good story if told accurately (read Sully's book!) so disappointing the film-makers felt a need to make up opposition and conflict.

Tom Hanks does it again... - Sully review by JH

Decent little flick and not too long which I like. Great performances from everyone especially Tom Hanks who never lets you down.

Take Hanks out of this film and you have 90 minutes of wonder at how a pilot crash landed a plane into a river. Really not that interesting no matter how many bits of false drama are added. Hanks of course gives it a lot of personality but it isn't enough.

When you know the ending ... - Sully review by WM

Not sure that I learned more than I did when reading about the events as reported at the time. Might have greater impact for those who do not know the background.

Quality stuff this one.

Hanks is brilliant as youd expect, and Clint gets his mugshot on screen briefly, +1 for that!

As someone else said, the crash investigators are out of order - but fortunately that gives us this film.. One of the best pilots on the planet having his judgment questioned.

Well made and faithful to the story. - Sully review by PB

Interesting account of a miraculous escape with plane manufacturer trying to pin the blame on Human i.e. pilot error.

Great film, quite an eye opener. Kept us enthralled throughout. Tom Hanks put in a very good performance, again.

Well they took a near tragedy and managed , with Tom Hanks help , to turn it into a drama , though the drama was a little mild and maybe the investigating panel overplayed. To be honest if the pilot on my next flight looked as old and worn out as Hanks I would probably let the train take the strain. Not a bad film but a lot of minutes wrangled out of a short drama. One for Hanks fans.

Tom Hanks done this man Sully proud ,and now I understand why Captain “Sully” is considered a hero by aviators and the public. My Son who lives in the States does a lot of flying ,sings his praises , after 9/11 this film restored confidence in the American flying public , it was riveting no other actor could have told such a story

Sully (aka Sully: Miracle on the Hudson) review by Mark McPherson - Cinema Paradiso

Tom Hanks is no stranger to biopics of men that are courageous (Captain Phillips), smart (Charlie Wilson’s War) or snide (Saving Mr. Banks). But his role as Captain Chesley Sullenberger may be one of his best roles, as a man that was rather humble for landing a plane on the Hudson. Hanks looks the part and plays it well, from his quiet nature during the NTSB hearings to his by-the-book method of making the tough call in the pilot’s seat.

But how much of a story is there to tell about Sully? He’s a humble man that doesn’t seem to have any major flaws and made the right choice at the right time to save lives. There are a few nightmares he has about the experience, terrified at his own imagination for what would happen if the plane did crash in New York City. Who wouldn’t after such an experience? The most interesting aspect of Sully is how he carries himself during all the congratulations and accusations, never bathing in praise or frothing with passion. He’s a surprisingly normal pilot that just did his job and did it very well.

Director Clint Eastwood makes a smart move in directing this picture with a non-linear structure. The first act follows the initial investigation and media circus, the second the actual landing of the plane and the third a courtroom drama of the incident. I think Eastwood realizes that Sully himself is not that interesting of a character to hold the straight story. Rather than pose the picture as Robert Zemeckis’ Flight, which blew its wad on the special effects of the plane landing in the first act, Eastwood reserves the middle of his picture for the money shot of Sully’s water landing. When the movie arrives at this segment, it never pulls away from the entire experience of the landing and rescue that lasted less than an hour.

During the landing sequence, however, the movie spends too much time establishing mini-arcs of the passengers on the plane. But in trying to stir up some extra drama with the people on the plane, it’s so miniscule and ineffective. Sure, I cared that these characters made it out of this landing alive, but only as much I’d want to see any stranger survive such an event. Eastwood also throws in a few mini-arcs for the coast guard and rescuers in hopes that you’ll feel more for them as well. This is extra baggage that the movie doesn’t need as there is plenty of tension and interest in how Sully follows procedure, land the plane in the water and make sure everybody makes it safely out of a sinking vehicle in cold climate. The entire movie could have been just about the landing the way Eastwood sets up and finishes so many characters in just one act.

Another aspect of these based-on-true-story movies that is wearing thin on me are the after credit sequences calling back to the real event. For most films, some additional text of what followed the events would be placed before the credits and that would be enough to get one interested in learning more. The trend now is to follow that with various photos. Then show footage of the actual plane. Then show footage of the real-life passengers and Sully introducing themselves. When did the DVD special features turn on during the end of the movie? It’s not that it seems out of place or inappropriate, but there’s enough material presented here as though it were supplements from a documentary. Perhaps this was intended as a preview to a documentary?

While Sully isn’t one of Eastwood’s best, it does maintain his streak of crafting movies around modern heroes. He builds them up as honest and human characters, but also crafts their stories to be real crowd-pleasers. In this sense, Sully is given perhaps the most fitting of theatrical portrayals without all the usual bells and whistles. He has no need for such extravagance as a simple pilot who made a not-so-simple landing.