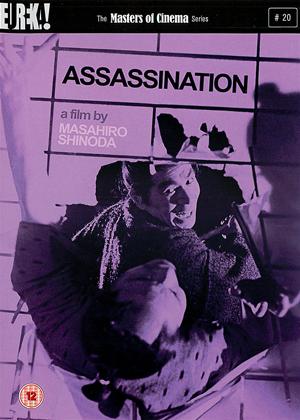 Set amidst a turbulent period in Japan’s history, Ansatsu is a marvellous snapshot of the political manoeuvrings amongst the ruling class and those in search of power. As far as Samurai films go, there are certainly several more enjoyable and epic portrayals available with their emphasis on action. What makes Ansatsu so delightful is Masahiro Shinoda’s directing and use of static images to convey moments of drama and passion. Dialogue forms the bulk of the film, as each side formulates their strategy, fight scenes are short lived but brutally powerful. Beautifully staged scenes and backdrops come to as Shinoda utilises a broad range of angles and tracking shots. Ansatsu like Silence is well worth experiencing.

In many ways, this is an interestingly complex film. The extremely flawed hero is played by Tetsurô Tanba very effectively, switching effortlessly from his usual stone-faced impassivity to the man behind the mask, chatting in a completely natural way in the rare moments when he finds himself among true friends, and in the privacy of his home showing how deeply it affects him to take a human life, which is the single most effective plot-device in the entire film, since his willingness to kill and the circumstances in which he does so take on a completely different meaning once we know how he really feels about it. We're also given several different possible motives for his actions, which for most of the movie seem to be a cynical betrayal of his former comrades, ranging from selfless idealism to Macbeth-like ambition triggered by the fact that he owns a supposedly magic sword, and although we eventually find out what he's really up to, we're never entirely sure why.

On the other hand, this is a very Japanese film indeed. Although the hero, a commoner who has risen by talent and determination to the unofficial status of a samurai, is to some extent committed to social reform, there's a constant sense that all these people are so obsessed with duty, honor, and tradition that they're either a bit simple-minded or have a bizarre death-wish ("The Seven Samurai" is infinitely more subversive in this respect). The cause our hero is fighting for is also peculiarly abstract, and may baffle anyone without an in-depth understanding of 19th. century Japanese politics. Nothing really seems to be achieved, apart from the prevention of a very small war (the number of potential combatants on one side is 234) between two equally misguided factions, neither of whom comes across as particularly pleasant.

And I have to say that Masahara Shinoda's directorial style has few standout moments. Compared to "The Assassination of Jesse James by the Coward Robert Ford", another slow-paced film which also shows us the lives of extremely violent men with surprisingly little violence, it's visually dull to look at; similarly-dressed upper-class Japanese men in stereotypical Japanese interiors appear in just about every scene. And Shinoda really can't do action (which is perhaps why there's so little of it); it was just plain amateurish, especially as late as 1964, to repeatedly use freeze-frames whenever something really bad happened. Perhaps it's best compared with something like "Tinker, Tailor, Soldier, Spy", where none of the protagonists are squeaky-clean, the goal is something that only really matters to people in their odd little world, and violence or other any literal action is infrequent. But I'm afraid it lacks the richness of detail and, apart from the hero, characterization that a story of this kind needs. At times I felt I was watching a film adaptation of a stage play which might even have started out as a one-man show. So, a mixed bag, and not as involving as it could have been.