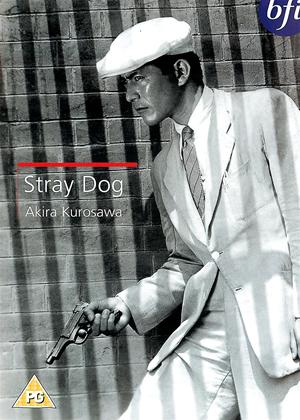 Synopsis:
When rookie detective Murakami (Toshiro Mifune) has his pistol stolen from his pocket while on a bus, his frantic attempts to track down the thief lead him to an illegal weapons market in the Tokyo Underworld. But the gun has already passed from the pickpocket to a young gangster, and Murakami's gun is identified as the weapon in the shooting of a woman. Murakami, overwhelmed with remorse, turns for help to his older and more experienced senior, Sato (a superb performance by Takashi Shimura). The race is on to find the shooter before he can strike again...
Actors:
Toshirô Mifune, Takashi Shimura, Keiko Awaji, Eiko Miyoshi, Noriko Sengoku, Noriko Honma, Reikichi Kawamura, Eijirô Tôno, Yasushi Nagata, Kappei Matsumoto, Isao Kimura, Minoru Chiaki, Teruko Kishi, Ichirô Sugai, Gen Shimizu, Kan Yanagiya, Hajime Izu, Masao Shimizu, Kokuten Kôdô, Yûnosuke Itô
Directors:
Akira Kurosawa
Writers:
Ryûzô Kikushima, Akira Kurosawa
Aka:
Nora inu
Studio:
BFI Video
Genres:
Drama, Thrillers
Countries:
Japan, Drama, Thrillers

The performances are fine. The maguffin that drives the hero is a simple one but much flows from it. My only criticism (without wishing to spoil the plot) is that the market scene really really drags – and it requires some goodwill on the viewer’s part to recover from this downturn. But your perseverance would be rewarded.

Akira Kurosawa made some great movies. Unfortunately this early film isn't one of them. Oddly, it has approximately the same plot as the much later "Blue Steel" starring Jamie Lee Curtis, one of the last people you'd expect to step into the shoes of Toshiro Mifune! Talking of whom, he's not as over the top as he sometimes was, probably because he's not playing his default character, the incredibly stern samurai who looks as though he has barbed wire for breakfast, but I constantly had the impression that this man wasn't ideally suited for police-work, being both emotionally unstable and not over bright. That other less celebrated frequent member of Kurosawa's ensemble, Takashi Shimura (you may remember him as the leader of the Seven Samurai), gives a far better performance, and is much more plausible as a competent policeman.

The film's strength lies in its characters. Almost everyone we meet, including the criminals, is a believable human being with complicated motivations that aren't one-dimensionally good or bad. The hero is, as another character points out to him, irrationally obsessive about the crimes committed with his stolen handgun by somebody who would otherwise have done exactly the same things with a different gun, so really he's more concerned about his wounded pride than anything else. The "stray dog" of the title, although he remains unseen for almost the entire film, is repeatedly shown to be no supervillain, just a weak, muddled man doing bad things for confused, pathetic reasons. Even minor characters are allowed odd little moments where they do something quirky, such as admiring the night sky simply because they've just noticed how pretty it is.

The film's weakness is that it's very slow, and not much happens. Almost all the really dramatic incidents take place offscreen, and we're shown way too much footage of Toshiro Mifune wandering down streets or sitting in rooms waiting for somebody to eventually reveal a vital piece of information. I expect this is an accurate depiction of what real police-work is like, but it's not terribly interesting. I'd give it two and a half stars if this site allowed me to, but I'll go the extra half because Kurosawa was clearly trying to do his best. But his best was yet to come, and in 1949 he had a few things still to learn about plot structure.