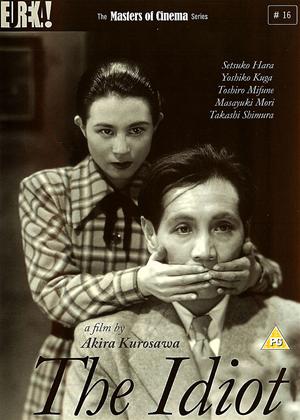 Synopsis:
Akira Kurosawa's The Idiot - his only adaptation of a Fyodor Dostoevsky novel - was a cherished project on which it is claimed he expended more effort than on any other film. A darkly ambitious exploration of the depths of human emotion, it combines the talents of two of the greatest Japanese actors of their generation - Toshiro Mifune and Setsuko Hara. The Idiot is perhaps the most contemplative of all Kurosawa's work, a tone which is heightened by the unusual, trance-like performances. Kurosawa's electrifying dramatisation uproots the novel's Russian Summer setting to a memorable, snowbound Hokkaido - the northern-most island of Japan, closest to Russia in climate and custom.
War criminal Kameda (Masayuki Mori), reprieved from a death sentence, is fresh out of the asylum, mentally fragile, and prone to epileptic fits. In turn, his emotional involvement with two women (Setsuko Hara and Yoshiko Kuga) and his new, increasingly volatile friend Akama (Toshiro Mifune) lead him further into madness and gross tragedy.
Actors:
Setsuko Hara, Masayuki Mori, Toshirô Mifune, Yoshiko Kuga, Takashi Shimura, Chieko Higashiyama, Eijirô Yanagi, Minoru Chiaki, Noriko Sengoku, Kokuten Kôdô, Bokuzen Hidari, Eiko Miyoshi, Chiyoko Fumiya, Mitsuyo Akashi, Daisuke Inoue
Directors:
Akira Kurosawa
Writers:
Akira Kurosawa, Fyodor Dostoevsky
Aka:
Hakuchi
Studio:
Eureka
Genres:
Drama
Countries:
Japan, Drama

Reviews (2) of The Idiot

This lesser-known and extremely atypical Kurosawa film is one of those odd movies that you can't truly dislike because every frame tells you that the numerous extremely talented people involved think it really matters and are giving it all they've got, which is a pleasant change from the relentless greed of today's soulless blockbusters in which some of the actors aren't even alive. But at the same time you can't help admitting that it doesn't quite work. The elephant in the room is that the hero is a saintly simpleton who never tells lies or hides how he feels. Masayuki Mori acts his heart out, but how much complexity can he possibly bring to a character who has none at all? And he has to keep it up virtually non-stop for two and three-quarter hours.

"The Man Who Fell To Earth", which was obviously influenced by this film in many of the scenes where it departs from its source-novel, works far better because its protagonist is an extraterrestrial, so it makes sense for him to have an impossible mix of elements in his personality. Here, the hero is required to have a very specific form of post-traumatic epilepsy that I doubt any doctor has ever actually seen, which somehow makes him into Jesus Christ because he has brain damage, and his stupidity is counterbalanced by infallible wisdom and intuition so acute that he's at least borderline psychic. He comes across less as a person than a set of tropes. He doesn't even have any backstory beyond the one event that simultaneously made him resolve to be a better person and drove him insane - being sentenced to death but reprieved at the very last moment. By the way, the synopsis on the General Info page is, as usual, slightly wrong. Kameda isn't a war criminal; he was mistaken for one, and the error was discovered just in time. So we don't even know whether he's atoning for terrible things he once did, or just a bit mental.

Toshiro Mifune is more restrained than he usually is, but Akama is so obviously a man with an exaggerated personality which just happens to be the exact opposite of Kameda's that he even says so himself. Setsuko Hara provides the best acting as the woman who forms the third part of the love triangle central to the plot, but she too is not so much a person as a game-piece whose own life-shaping trauma has left her with a few very specific and very intense personality traits. It's all terribly intense, but not as moving as it wants to be because these people and the situations they get into seem as symbolically stylized as the weather - if this film is to be believed, in Hokkaido it's always Winter. For a film about various kinds of raging passion, its artificiality sometimes makes it seem as cold as the cast must have been trudging around in all that snow.

Sound out of sync - The Idiot review by JW

Not a review of the film per se - but the sound on the DVD I received was a couple of seconds out of sync. If this is the kind of thing that will annoy you (and it infuriated me), avoid.