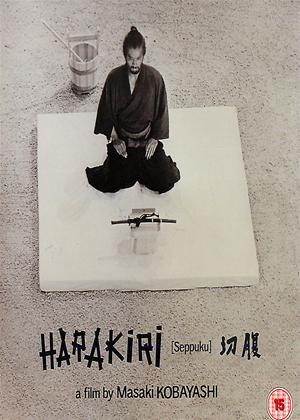 It never fails to amaze me how deeply and passionately emotional orientals are, despite their normal reputation of being inscrutable! This is an incredibly gut-wrenching performance (in more ways than one!) with brilliant acting. It is very slow and drawn out, like a Japanese tea ceremony, but it has to be. The portrayal of what it's like to be poor, with the helplessness involved, and how people compromise when desperation overtakes them, and woe to anyone who dares condemn them, who hasn't been there, is marvelous and so true to life. Not just Japanese life in the 17th century either: all human life in all ages. Indeed, the universality of the multiple and profoundly deep messages in the film is what makes it truly great. The final speech of Hanshiro Tsugumo, where he questions his audience saying: why did not one of them think to question the reasons for his predecessor's actions etc - that speech is the cry of the human heart through the ages. My soul feels it can breath in the profound atmosphere of this film, and realises how shallow and stultifying so much of modern cinema is. I should also mention the visual impact of this beautiful black and white film - there are many pictures you wish you could cut out and put them in a frame on your wall. Everybody should watch it, feel it and meditate on it!

Although it's set almost 400 years ago, this film is really a savage indictment of the mercilessly rigid code of honour and duty which still to some extent dominates Japanese society, and certainly did until the end of World War 2. And by extension, all societies which value total obedience to pointless rules above simple humanity. Though fortunately not many societies require men who are perceived to have broken meaningless taboos to ritually disembowel themselves.

Tatsuya Nakadai is absolutely magnificent as the unemployed samurai who comes to a noble house seeking this gruesome privilege. At first, his thousand-yard stare and burned-out stoicism threaten a one-note performance that's going to become wearisome. And after the terrible fate of the previous man who asked the same thing is revealed to him, and us too, in flashbacks that are harder to watch than any horror film because what happens is so hideously believable, and he isn't deterred, it looks very much as though we're running out of plot with three-quarters of the film still to go.

And then we start to find out what's really going on, in a story told mainly in flashback, and Nakadai gets to show off his full range as an actor, as we find out how a samurai who honored the code of bushido all his life eventually discovered in the hardest possible way what it was worth compared with basic human decency. Not many actors could pull off the feat of showing us the many sides of this character, from the loving and kindly family man to the implacable avenger driven by cold, hopeless rage, and quite a lot in between, but Nakadai genuinely convinces us that this is the same person at different times in his life, depending on how fate has been treating him. And unfortunately fate really has it in for him.

It's slow-moving, but in a way that builds the tension steadily, with new layers of plot constantly being added in flashback as the protagonist explains how he reached this point to a crowd waiting with increasing impatience to see him die. And although it's not action-packed, it's not action-free either, and sometimes it gets downright ferocious. This is a landmark of Japanese cinema that deserves to be far better known, and a searing indictment of the hypocrisy of cultures that think their traditions, however cruel and useless, matter more than the people whose lives are controlled and sometimes destroyed by them.