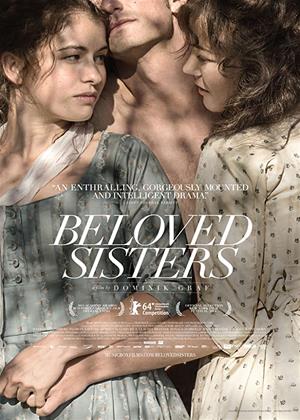 Unavailable
Vision: From the Life of Hildegard von Bingen

Not released
The Promise

For a good chunk of Beloved Sisters, we see characters writing. Writing is not something that always makes for the best filming, but perhaps that’s because it rarely carries a sense of drive and emotion. Here we get to see several characters from this period piece express so much through their writing and never feel like we’re being lulled to sleep by narration. The direction is quick, the readings are emotional on varying degrees and the overlaying scenes make them a visual splendor. But even with this grand achievement in an overused element of period pieces, Beloved Sisters still asks for quite a bit of your patience.

Though the film is based on the life of famous poet German poet Friedrich Schiller, the focus is more on the two sisters who fancied him. Caroline von Beulwitz and Charlotte von Lengefeld find themselves hopelessly attracted to the young man that came into both their lives. But rather than break their sisterly bond to compete against each other for the heart of Schiller, Caroline and Charlotte decide to share and form a more jovial love triangle. They giddily fawn over his writing and snicker over sharing a bed with him. After Schiller jumps into the river to save a boy swept away by the stream, the duo warms Schiller’s freezing skin with both of their bodies. While he recovers in bed, the two entertain each other by reading the blushing poet’s own work. They appear to be the most cheerful love triangle of their century.

Of course, such a relationship will not last and will eventually turn them against one another. But for the majority of the film, they try oh-so-hard to maintain their love which is doomed to tear them apart. Even when the sisters both enter marriage - one to Schiller and one to another man - they still believe they can make this work. Trying hopelessly to shield their bitter feelings, Caroline and Charlotte continue to share the man who has become an inspiration to both of them. He helps one with her writing, the other with fathering a child. Though Friedrich grows more confident in his writings - having moved up to the highest rung of academic appreciation by society - he finds himself anxious and torn between the two of girls. If he weren’t so sick, he might have put up a bigger fight of frustration.

The direction of the film is quick in the way it jumps ahead in time with each historical touchstone of their lives. Even with the narration and a three hour runtime, the editing zips along at a rather quick pace for certain scenes - zooming close on the subjects and whipping away to the next shot with speedful grace. It’s that type of direction that turns a strolling historical melodrama into something much more entertaining. Even the titles signaling the jumps in location and time are animated just to keep everything moving. As I mentioned before, the scenes of writing are given a bigger presentation than you’d expect. Director Dominik Graf truly knows how to make a film move with decadence.

For as beautiful and well-paced as the movie is, its story still just amounts to a series of melodramatic scenes that don’t really add so much a story as a boiling point. The tension continues to build on and on as the women begin to form careers and families. For three hours of stirring the pot, it certainly plays out the charade far and deep into the lives of these three - from young adults to older adults. Even with all this time, the movie only covers a portion of their lives before the eventual death of Schiller that is reserved for the narration. I’m at least thankful that it chooses a worthy climax of the two women shouting down each other in the hatred and jealousy they had built up for years. By this point, you’re relieved to finally see some raw emotion out of these two as opposed to the quiet facade behind poetry and dresses.

Beloved Sisters manages to stand out from its historical romance competition with some unique surprises in style and storytelling. Though it struggles to maintain its epic scale of a long-running love triangle, it’s hard to deny the genuine thrill of such an uncommon relationship that spawned from an important part of history. There’s true passion on screen without being trashy. There’s energy to the setting as opposed to being just another pretty picture to look at. Writing as someone who never truly dug the endless array of European period pieces that are usually a parade of historical fashion and overly soapy stories, I have to admit this one actually maintained my interest. And that’s saying something for three hours of melodrama.