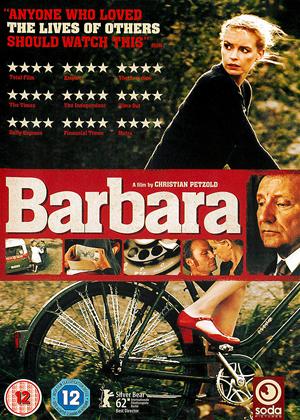 Synopsis:
Summer in the GDR, 1980. Barbara, a young doctor, is exiled to a provincial hospital, seemingly punished for attempting to leave East Germany. Confined to a claustrophobic small town and under a constant veil of suspicion, she befriends no one, waiting patiently for the opportunity to resume her mission. When her new boss appears to confide in Barbara, she is thrown. Hers is a life in which the fear of surveillance is embedded in all personal relationships, and she doesn't know who to trust.
Why has he covered for her and one of her patients? Torn between her instinct and her duty, the characteristically hyper-controlled Barbara begins to lose her grip on herself, her obligations and her heart.
Actors:
Nina Hoss, Ronald Zehrfeld, Rainer Bock, Christina Hecke, Claudia Geisler-Bading, Peter Weiss, Carolin Haupt, Deniz Petzold, Rosa Enskat, Jasna Fritzi Bauer, Peer-Uwe Teska, Elisabeth Lehmann, Mark Waschke, Peter Benedict, Thomas Neumann, Anette Daugardt, Thomas Bading, Susanne Bormann, Jannik Schümann, Alicia von Rittberg
Directors:
Christian Petzold
Producers:
Florian Koerner von Gustorf
Writers:
Christian Petzold, Harun Farocki
Others:
Christian Petzold
Studio:
Soda Pictures
Genres:
Drama
Countries:
Germany, Drama
Awards:

East Germany in 1980 looks grim. There is a lot of body cavity searching. Young girls are used in forced labour. References are made to concentration camps. I kept thinking that it was surely anachronistic but maybe not. Certainly it is not very clear why there is so much oppression. Barbara is interesting, she maintains a closed dower sadness for most of the time but bursts into quite surprising glee when her western boyfriend visits. It is generally bleak and the filming plain and the atmosphere of the whole is unusually sad but for the glimpses of hope it is uplifting.

Well acted and shot, with a powerful message. It is very bleak in parts but it is a powerful representation of social history and well worth watching. The two main actors are brilliant

A most unusual love story - Barbara review by AG

Superb acting wonderful pace, the suggestion that love,and commitment is just as important as political freedom is a very thoughtful challenge. I watched this twice , the second time with a friend who didn’t quite get it at first so we stopped it frequently to discuss . Not the best way to watch a movie especially one so tense , but it clarified what was going on . Not to be missed.

This is such a good film. I would wholeheartedly recommend this. It is quite bleak but completely gripping.

Very good film, set in GDR before re- unification of Germany. It's bleak and has some nice plot twists.

Barbara, an East German doctor is exiled from her cosmopolitan university clinic to a small paediatric practice somewhere in the East German countryside during the 1980’s and oppressive Stasi regime of the German Democratic Republic. The reason for her punishment goes unknown throughout the movie and yet, although this is the main driving force of the narrative, upon reflection it seems only secondary to the emotional and political turmoil expressed by the characters themselves.

Forced into a new position Barbara finds her tiny government allocated flat routinely searched and her privacy constantly violated, her new boss at the surgery, Andre, has been seen with Stasi officers and, Barbara suspects, is a government informant. Her only respite is the clandestine meetings with her lover, a West German, who brings her cigarettes and money as they plan her escape from East Germany.

Barbara’s cold and detached manner, clearly a consequence of the punishment for her unknown crime (which reading of notes surrounding the film suggests may be as innocent as signing a petition saying she would like to leave East Germany), is contrasted with the warm demeanour of Andre; and somehow her interactions with her superior slowly begin to break down her wall of distrust and bitterness, as a relationship begins to develop between the two.

The most overwhelming aspect of the movie is, by far, the superb acting abilities of Nina Hoss as Barbara and Ronald Zehrfeld as Andre; their muted by decidedly different personalities ebb and change like salt water slowly corroding a rock, reshaping it into something entirely different but still beautiful in it’s own stoic and natural way.

The surprising and slightly unbelievable ending to Barbara arguably fits well with the overall tone of the piece and if nothing else helps to keep the messages and images resonating long after the movie is over.