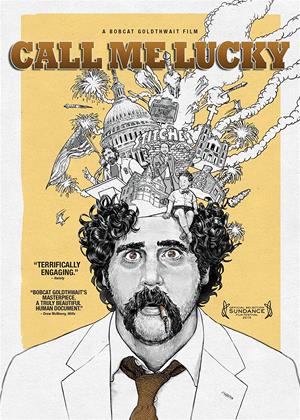 Sign up
Margaret Cho: I'm the One That I Want

Reviews of Call Me Lucky

Barry Crimmins’ rage is what fueled his legendary stand-up act. Shaped by tragedy, he booms onto the microphone with a furious tone and provocative nature. The great comedians are the ones that make you think and question while you laugh. To Barry, it didn’t even matter so much that you laughed as long as you listened to his large rants about corruption in politics and religion. He just happened to be good at being funny with his angry material.

Watch any of Crimmins’ stand-up routines and you’ll find the makings of a great comedian. Whereas other comedians of his era found funny voices or everyday observations, Crimmins took aim at touchy subjects of politics and religion with a bazooka. To gain a better understanding of the genius in his material, several top comedians weigh in on what it was like to experience Crimmins in a time that wasn’t as daring. Long before the internet supplied the public with all the news and information to fuel online rants, Barry was a seeker of current events and the blunt messenger of enraging topics. Energized by booze and smokes, Barry exploded onto the audience with a rant that was equal parts provocative and hilarious.

His humor and attitude not only served as an inspiration for comedians, but he literally built up comedy in the 1980’s. Founding two comedy clubs in Boston, Crimmins helped launch the careers of such comedians as Steven Wright and Paula Poundstone among others. He loomed over such young talent with all the crass and potent attitudes of a hard-edged boss who wanted you to succeed, but came on strong as a jerk. One interviewee remarks how Barry would often toss dashboard gifts out of other people’s cars if it annoyed him so. Producing several acts, Barry would foam at the mouth with rage about bits that were too simple or didn’t work. He wanted the best for his club and out of the people he knew - even if he had to spit and holler through his shaggy mustache.

While Barry made a name for himself with all his acts of comedy and protest, this documentary by Bobcat Goldthwait gives a bigger picture of the man. Before seeing this movie, some may wonder why Barry was so angry and loud about politics and religion. After seeing what he went through in his more personal moments, you may wonder why isn’t angrier. He’s a survivor of childhood sexual abuse that remembers the experience quite vividly. His time in church was not a positive one in which he has constantly hassled by the Catholic priest. What’s unique about this angle is that it’s saved up for the second act as a major turn when dealing with Barry’s more personal politics. During the 1990’s, Crimmins took it upon himself to take on the newly formed America Online chat rooms that were fertile ground for pedophiles. It’s a noble enough effort, but made all the more powerful by his convictions.

Despite Barry’s troubled past, there is no need for pity. He faced his demons and continues to fight against oppression, corruption and terror with a microphone in hand. In his own words, he’s no longer a victim. And considering he now lives in a secluded rural area where he can chop wood all day long, he turned out much better than I expected for a comedy legend. Most comic geniuses find themselves crippled and depressed in a wallowing mess during their twilight year. Barry gives a big middle finger to that notion just as loud as his act where he continues to shout down at the Catholic church and the sloppy state of international politics. The fire never left his spirit and has only burned brighter with age.