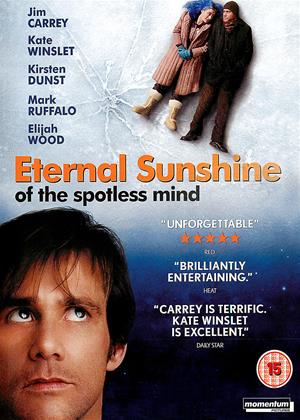 Rent other films like Eternal Sunshine of the Spotless Mind

Reviews (14) of Eternal Sunshine of the Spotless Mind

An absolute masterpiece. - Eternal Sunshine of the Spotless Mind review by CP Customer

The plot of 'Eternal Sunshine Of The Spotless Mind' is essentially a love story in reverse. Joel is a quiet introverted man who discovers that after a particularly bad argument Clementine, his loud; extrovert girlfriend has had an experimental medical procedure to erase him from her memory. So traumatized and emotionally hurt is Joel that in retaliation he tracks down the clinic of Dr. Howard Mierzwiak the inventor of the treatment, and asks for the same procedure to remove Clementine from his memory. During the procedure Joel finds himself revisiting all the memories of his ex-girlfriend inside his mind. However, as the memories become older and fonder, Joel finds himself again remembering the love he and Clementine shared and begins to regret his decision. With the procedure steadily wiping memories of Clementine from his mind, the unconscious Joel tries to fight the erasing process by taking memories of Clementine and hiding them within other memories. As bizarre as the idea behind the film is, once you've seen it, you know it couldn't ever be told any other way, and although sounding complicated, the way the story is told is relatively easy to follow. One of the most amazing aspects of the film is the performance of Jim Carrey; he gives the most restrained, emotional and quite honestly the greatest performance of his career. Kate Winslet is equally good and her overtly extrovert portrayal of Clementine is the perfect balance to the shy Joel. Aside from the exceptional performances from Carrey and Winslet, what really draws you into the film is the honesty and sincerity that director Michel Gondry and writer Charlie Kaufman put into the story, turning quite a complicated idea into an accessible, entertaining and moving masterpiece.

Impressive performances by all. Glad to see Jim Carey in a "straight" role. I found I had to concentrate hard on what was happening in the film to make sense of it. So glad I did. Its one of the best films of 2004 in my opinion.

It's the type of film to split the audience right down the middle. It's original & fantastic. Don't expect the usual mad-cap Carey

A film about relationships starring Jim Carey. I think it's fair to say I was not looking forward to it.

It was actually a great film, one of those rare viewing experiences that really opens your mind.

Charlie Kaufman has to be the quirkiest mainstream screenwriter Hollywood has ever tolerated. His films are often completely insane, but always startlingly original, and that's what makes them such compulsive viewing.

The trailer suggests a film that will envelop the viewer in a whirlwind of emotions. And for the first 20 minutes at least, it does, so captivating is Joel and Clementine's first meeting.

Only in the second act does the film begin to falter slightly, but it's back up to speed quickly.

Jim Carrey gives another excellent performance and he's matched every step of the way by Kate Winslett. She's irresistible here and, without doubt, more watchable than we've ever seen her.

Kaufman assures that his leads are real and complex - Joel likeable and goodhearted, but also pathetic, Clementine enticing and exotic, yet impetuous and cruel. Carrey and Winslett must have delighted in these nuances of character, as their performances alone are worth the price of admission.

Director Peter Gondry mixes the real and surreal with an ease and regularity that impresses. His confidence and editing skills were gained in the music industry and these skills must be prerequisite when collaborating with Kaufman one assumes.

Kaufman's detractors will, no doubt, state that his screenplays are precocious and self-congratulatory harboring delusions of profundity. But quite simply, whatever you think, his work attracts some of the finest actors in Hollywood - John Cusack, Nicolas Cage, Meryl Streep, Jim Carrey.

You can't argue with that.

Michel Gondry is an incredibly talented director. He's put all his talents creating music videos for Chemical Bros., Bjork & Daft Punk to work and made a bizarre and unusual film which will twist your head off and tickle your brain.

This time Jim Carray isn't the funny man - this is more an art house movie and can be quite difficult to follow because of the chronological mishmash, but if you wait to end things become more clear and make sense. It is almost a philosophical movie asking interesting questions about erasing your memory of unhappy or unpleasant experiences.

Not sure how a previous reviewer could think that this was going to be easy going. It is thought provoking, interesting and challenging. You do have to be prepared to work, and to see it through to the end. It is a little bit "pop psychology" in it's view of memory, but hey, no-one claimed scientific accuracy. I really enjoyed it - it is so much more engaging than your average bubble gum movie.

Daft premise undermines the serious subject. Lots of movie stars whose charisma saves the day. Does give the brainbox a work out, but indulges in silly stuff which could have been left on the cutting room floor.

Strange but well done. - Eternal Sunshine of the Spotless Mind review by NC

Was well done and well acted and worth 3 all day, but found it a bit drear, and not really bothered what happened to anybody by the end.