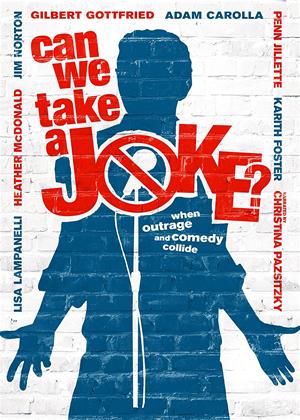 Synopsis:
In the age of social media, nearly every day brings a new eruption of outrage. While people have always found something to be offended by, their ability to organize a groundswell of opposition to - and public censure of - their offender has never been more powerful. Today we’re all one clumsy joke away from public ruin. Can We Take A Joke? offers a thought-provoking and wry exploration of outrage culture through the lens of stand-up comedy, with notables like Gilbert Gottfried, Penn Jillette, Lisa Lampanelli, and Adam Carolla detailing its stifling impact on comedy and the exchange of ideas. What will future will be like if we can’t learn how to take a joke?
Actors:
Adam Carolla, Bob Corn-Revere, Noam Dworman, Karith Foster, Gilbert Gottfried, Penn Jillette, Lisa Lampanelli, Chris Lee, Greg Lukianoff, Heather McDonald, Jim Norton, Jonathan Rauch, Jon Ronson
Directors:
Ted Balaker
Narrated By:
Christina Pazsitzky
Genres:
Documentary, Special Interest

Rent other films like Can We Take a Joke?

Not released
How to be a Player

Not released
Penn and Teller Get Killed

Not released
Winning: The Racing Life of Paul Newman

Sign up
Lisa Lampanelli: Back to the Drawing Board

Not released
You're Not You

Not released
The Adventures of Ford Fairlane

Sign up
Jasmine's Enchanted Tale: Journey of a Princess

Reviews of Can We Take a Joke?

Can We Take a Joke? review by Mark McPherson - Cinema Paradiso

Comedian Patrice O’Neil appeared on a Fox News panel about Opie & Anthony making a rape joke and being reprimanded. Arguing against the joke was Sonya Osario, President of the National Organization for Women. At one point Patrice asks her, “Do you think they were trying to be funny?” She responded by saying she doesn’t care if they were trying to be funny. “That’s what I’m saying - that’s not your business,” replied Patrice. It’s a telling exchange on comedy that is strangely missing from this documentary among other things.

The topic of Can We Take a Joke? is certainly a strong one that is worth delving into. There was a time when comedians were hailed for their jokes by college students. Now college students are so appalled by comedian content they don’t want them coming to their universities. One minor slip of the tongue or one controversial insult and social media explodes into a frenzy of a witch burning. What happened to the audience that once craved to be challenged with raw and fearless comedy? Does such mockery and ribbing have a place in today’s world? Big questions, but not much of any answers here.

This documentary is more of a review than an exploration of the current climate of censorship. Adam Carolla talks about his outspoken nature on his radio program where he calls out liberals. Gilbert Gottfried discusses being fired as the Aflac duck after making a controversial tweet about the Japanese flood. Lisa Lampanelli mentions being picketed by the Westboro Baptist Church. And, in great length, the legacy of Lenny Bruce is covered in extensive detail.

Yes, I remember all of this and it’s worth noting, but what does this all lead towards? Director Ted Balaker seems to want to merely present a few cases for how much it sucks to be a comedian in an age when social media witch hunts and social justice outcry is at an all-time high. The history of how our society reached this point is never given the magnification it deserves. Perhaps Balaker isn’t interested in the opinions of the sensitive young people that have called for the offensive speakers to bow to their whims of apology and language policing. Maybe he just wants to hold up a few examples of how tough it is to make a joke in the age of fiery political correctness.

There are a few different examples where the case against censorship is more engaging. A playwright had his Jesus satire shut down by student activists and police refused to help him as they found his material offensive. A woman who made an AIDS joke before getting on a plane had lost her job before it landed from the outcry of the internet. These are interesting events that deserve more discussion for a subject larger than this documentary can accommodate.

Can We Take a Joke? essentially preaches to the choir about freedom of speech. Jokes should be made, no matter how vulgar or offensive they may be. They may end up being unfunny, but the best comedians do not play it safe. If the audience doesn’t like it, they won’t listen and that comedian’s run is over. But a comedian should be allowed to try and fail without fear of police involvement or being harassed. I agree with this view, but it’s been said and implied numerous times with many comedians. Get some new material!