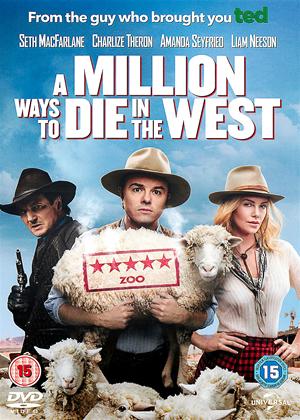 Reviews (7) of A Million Ways to Die in the West

Didn't really know what to expect but i actually really enjoyed it! Had a lot of very funny moments and actually made me laugh out loud several times. I'v loved Seth McFarlane as a voice actor (Family Guy, American Dad!, Ted) for many years but this is the first time I have actually seen him act in person, and I have to say I'm impressed, he is a very talented man. Also very good acting from the rest of the cast, especially Charlize Theron and Liam Neeson. ??

This is what this self-indulgent "comedy" should have been entitled. The only amusing thing in this otherwise "laugh-free" nonsense was the End Credits - which seemed to last longer than the actual film. Do we really need a credit for "Mr MacFarlene's personal chef"?

This film is stupidly stupidly funny. Probably the sort of film a single 20 year old would love but it is completely crap to any other group of people! Definitely a never watch again film

Very funny, non-pc, one-off Western - A Million Ways to Die in the West review by PV

In spite of myself, I really enjoyed this movie.

I was expecting a Western - but got a weird screwball comedy with some really funny jokes and scenes - some crude, some old, some surreal.

Yes, all puerile - but why not?

It's a comedy which WILL make you laugh. But not for the easily offended.

Take out the diarrhoea scenes, the causal sexism and the incessant cursing for effect and there’s a good film trying to get out here. The sweeping Monument Valley landscapes are stunning, the score is Big Country splendiferous, the characterisation is winning and the jokes are actually often funny.

Comedies are usually too upfront and poorly directed to be memorable beyond their run-time, but star/writer/director Seth MacFarlane has a surprisingly good ear and eye for his material. There’s even a surreal dream sequence that is quite stunning. Shame about the many lapses of taste.

Could have been really funny/clever, if third form not written the script. - A Million Ways to Die in the West review by NC

Liam will take a penny from anything these days. Miles from Schindlers List now.

If they could have cut the very puerile, mindless, toilet/sexual humour, they could have done a 3 Amigos, or Blazing Saddles. Some of the punch lines and sketches make Will Ferrell's worst takes look like Olivier.

The cast are all pretty good to be fair. The filming and editing is pretty good. If could have cut 10% of the film, it would have been 100% better!

Seth MacFarlane is back behind the camera (and in front of it) for his follow up to Ted and this time he is lampooning the classic western but instead of a Blazing Saddles esque comedy romp this is just as childish as his prior work and maybe even more so but regardless of the comedy employed by the creator of Family Guy this is a fairly entertaining little journey into the old west even if some of the jokes feel like old rehashes of Family Guy cutaways.

A Million Ways to Die in the West follows Albert (MacFarlane), a lowly sheep farmer who is dumped by his girlfriend Louise (Amanda Seyfried). However when the beautiful Anna (Charlize Theron) arrives in town he is taken by her and when she starts teaching him to to shoot he starts coming into his own. However when prized gunfighter Clinch Leatherwood (Liam Neeson) comes to town looking for someone Albert finds himself in serious trouble as he contemplates the many ways he might die in the west.

While the film feels like a testing ground for what works in period comedies and what doesn’t there is plenty here to laugh at and overall the film is a pretty satisfying story of good versus evil and everyone in between. The film has some great double teams to work with as the pairing of MacFarlane and Theron makes some of the films best moments and the confusing sexuality of the pairing of Giovanni Ribisi and Sarah Silverman is equally charming.

In fact the film works best when characters are riffing off one another and while the film rarely strays from the script its the more improvised moments that work to the films advantage with Theron giving one of her best comedic performances as the boysrous Anna who almost certainly wears the trousers in her relationship with Albert.

While some of the material doesn’t work and the first act is ever so slightly dull without Theron’s presence the film comes into its own in the 2nd act as the tone comes into place and the material gets a little more nuanced as the film stops setting things up. By the end you will be glad you caught it but it won’t leave you clamouring for more in the same way Ted did.