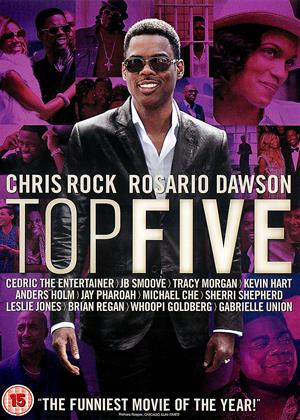 In the opening scene of Top Five, Chris Rock’s character rants to a reporter on the street that nothing has changed in society just because Obama is the President of the United States. To prove his point about racism, he walks out into the city streets of New York City and tries to hail a cab. He shouts while raising his hand about how hysterically backwards it is that a black man can’t get any service in this city. The first cab passes him, but the second one stops on a dime. He sighs at having his point disproven. The world really has changed and so has Chris Rock, but is it a change he can live with?

Semi-autobiographical, Chris Rock plays famed actor/comedian Andre Allen. What was once a grade-A comedian of the most unique calibur has been reduced to a mediocre actor. He tries to star in more dramatic roles, but is best known for his on-screen character Hammy, a cop in a bear suit (or a bear in a cop suit?). Due to the box office success of his dopey character, everyone on the street refers to him as Hammy. There’s even a beer named after the character which especially insulting given that Andre is a recovering alcoholic. Topple on a staged marriage for Bravo along with his new period-piece movie that is destined to fail against Tyler Perry at the weekend box office and his life is an uncontrollable rollercoaster of disappointment.

Approaching the age of fifty with such a career puts in a serious mid-life crisis. He finds himself only being able to open up to New York Times reporter Chelsea Brown (Rosario Dawson). These two hit it off quick with their brutal honesty. They’ve both been through the ringer of jobs they don’t want to do and help programs they don’t want to attend. Sick of all the games and phoney nature of the media, they lay all their cards on the table for each other. Worst sexual experiences and most awful depths of depravity become fair stories for trade. They spend the majority of their interview walking the streets of Manhattan as they let their thoughts flow freely from their mouths.

Dawson helps bring out the true Chris Rock instead of the one hidden behind poorly written movies, endless press interviews, his artificial marriage and even his own family. At one point Rock pretty much pulls down the meta current when he has a bachelor party with Jerry Seinfeld, Adam Sandler and Whoopi Goldberg all playing themselves. They too are just as savage with their honesty, never cracking any big jokes in front of Rock’s character. Their advice for marriage? Sign a prenup and don’t expect it to last. Outside of those celebrities appearing as themselves, there’s a parade of cameos from the likes of Kevin Hart, JB Smoove and Tracy Morgan among others. Even DMX pops up for one of the silliest moments of his career, attempting to sing another genre of music, but still trapped in his rapping mentality (“What!”).

Wait, did I mention this was a comedy? For all its down portrayal of Chris Rock’s struggle with public identity, it’s incredibly hilarious on multiple levels. It’s smart in how it takes aim at the Hollywood machine that savagely chews up that which it once polishes. It’s goofy in how Andre’s family sling insults back and forth with a captive audience of relatives. It’s also incredibly raunchy in how open both Rock and Dawson are with their sex lives which are anything but expected.

Top Five is a real return to form for Chris Rock in a personal comedy he crafts wonderfully by himself. Capping off the film is Chris Rock delivering stand-up at a club. He’s still got it. He may relay to the peanut galleries of the street that he doesn’t feel funny, but he is funny. Rock just needs the proper avenue to be the comedian everybody wants and needs. This film is proof that he is not only a triple threat as actor/writer/director, but that he can be one of funniest voices in the room if used properly. Whether he turns his career in a different direction at this point is tough to say. Perhaps Top Five says all that needs to be said about his career and what he wants out of it.