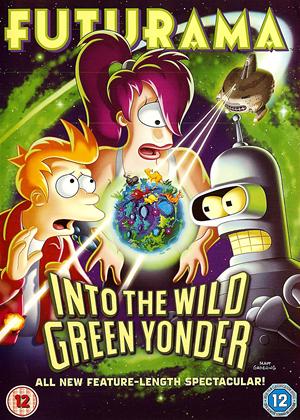 Synopsis:
In the most epic FUTURAMA ever, dark forces older than time itself are on the attack, hell-bent on stopping the dawn of a wondrous new green age. Don't you hate when that happens? Even more shocking: Bender's in love with a married fembot, and Leela's on the run from the law - Zapp Brannigan's law! Fry is the last hope of the universe, recruited for an ultratop-secret mission. Could this be the end of the Planet Express crew forever? Say it ain't so, meatbag! Off we go, Into The Wild Green Yonder!
Actors:
Seth MacFarlane, Teller, The Hypnotoad
Directors:
Peter Avanzino
Voiced By:
Billy West, Katey Sagal, John DiMaggio, Tress MacNeille, Phil LaMarr, Lauren Tom, David Herman, Dawnn Lewis, Snoop Dogg, Phil Hendrie, Penn Jillette
Narrated By:
Maurice LaMarche
Writers:
Matt Groening
Aka:
The Futurama Movie 4
Studio:
20th Century Fox
Genres:
TV Animated Comedies, TV Comedies

Rent other films like Futurama: Into the Wild Green Yonder

Reviews (1) of Futurama: Into the Wild Green Yonder

Doesn't quite work as a feature. - Futurama: Into the Wild Green Yonder review by CP Customer

I'm a big fan of Futurama, the previous four seasons before FOX cancelled the show were in my mind every bit as good as the Simpsons. While it's superb to have Futurama back, as a 85 minute single story feature length episode it doesn't quite work and lacks the pace and spark of the regular 22 minute shows.

Futurama: Into the Wild Green Yonder (aka The Futurama Movie 4) review by Mark McPherson - Cinema Paradiso

By the fourth Futurama film in this deal for more episodes on DVD only, the show has become self-aware enough that this may be the last Futurama ever. It wasn’t but the creators weren’t certain if new episodes would be commissioned after the films wrapped. It is for this reason why Into The Wild Green Yonder feels more like a film aware that it has less than two hours to end the series on a high note. And does the film do that? Well...kinda.

There are two major plots at play. The first is an environmental one that continues the degradation story of Mars by Amy’s parents. The destruction of such an environment is done in the name of constructing elaborate cities of pleasure and is attracts the ire of eco-feminists who oppose such destruction. Leela, tired of watching her employer approve of such destruction, including a golf course that will result in a 12% destruction of the Milky Way, decides to side with the eco-feminists.

The second plot involves Fry being pulled into a cult of literal tin-foil hatted followers, dubbed Legion of Mad Fellows, who believe in the coming of a sinister force known as The Dark One. Fry is more prone to believe this after an accident leads to him gaining telepathic powers. As the entire group is telepaths, they let Fry in on the history of the Encyclopods, the evolutionary battle they faced, and how it will result in the coming of The Dark One which will destroy all life in the universe.

That’s a whole lot of exposition and there’s an even denser plot to it than that. The bottom line is that the universe is one more on the brink of disaster and the Planet Express crew has to stop it. It’s pretty standard stuff but the moral considerations of the characters make the narrative all the more compelling since not everyone is on the same page. Fry is convinced a secret society can save the universe while Leela takes the activist route of advocating for change from higher-ups. Farnsworth is his usual shrewd self of placing business before nature and Bender plays his usual manipulative self for his own gain.

There are some decent bits here and there. The absurdity of the galaxy-sized golf course is a joke that thankfully doesn’t linger too long. An early portion of the first act is reserved for casino antics where guest star Penn Jillette gives off his usual loud and comedic performance. There are some solid digs at activism and conspiracy theorists as well that never boil these groups down into jokes so easy to condemn them. It’d be so easy for a film such as this to put down such groups given how previous episodes of Futurama often pushed back in these areas. Of course, any major reading of the series would tell you that the Futurama writers take environmentalism rather seriously and they don’t portray those with concerns as being overtly wrong.

The film ends on a hopeful and bittersweet note of the Planet Express crew entering a wormhole, unsure of where they’ll end up on the other side. They will, of course, come out just fine and go onto more episodes that would air on Comedy Central but that was not a thing at the time of production or debut. But as a send-off episode, it’s perhaps one of the best, considering this wasn’t the last time Futurama would compose a “final” episode. Overall, it’s an okay ending for these movies, even if the humor feels far more toned down in this feature than previous entries.