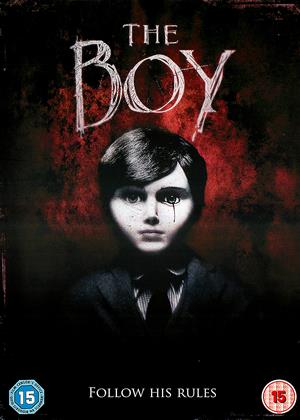 Synopsis:
Greta (Lauren Cohan) is a young American woman who takes a job as a nanny in a remote English village. She soon discovers that the family's 8-year-old is a life-sized doll that they care for just like a real boy, as a way to cope with the death of their son 20 years prior. After violating a list of strict rules, a series of disturbing and inexplicable events bring Greta's worst nightmare to life, leading her to believe that the doll is actually alive.
Actors:
Lauren Cohan, Rupert Evans, James Russell, Jim Norton, Diana Hardcastle, Ben Robson, Jett Klyne, Lily Pater, Matthew Walker, Stephanie Lemelin
Directors:
William Brent Bell
Producers:
Matt Berenson, Roy Lee, Gary Lucchesi, Tom Rosenberg, Jim Wedaa, Richard S. Wright
Writers:
Stacey Menear
Aka:
The Inhabitant
Studio:
Entertainment In Video
Genres:
Horror, Thrillers

Strange but good - The Boy review by gazmb

Very strange babysitting situation. She takes up a job as a nanny in an old country house with an old couple, things aren't as them seem when there boy is a doll, to help them cope with losing their son.

If Creepy Doll stories are your thing ,you wont go wrong here , A far better movie than Annabelle by a long way.

A tale with a twist and i have to say I did see the twist coming right from the beginning but it didnt spoil a really very creepy movie.

Twisted from the start , I found very little sympathy for the Girl in the film who took on a paying Job and then didnt even attempt to do said job. so whatever she suffered she kind of asked for initially ..... However ,who could expect just how far it would lead .

‘The Boy’ suffers from ‘how American writers think English people speak’, I’ll get that out of the way first. For example, the grocery boy Malcolm (Rupert Evans) says things like “I’m considered quite charming in this country.” Evans is encouraged to use a well-spoken but entirely region-free accent throughout. It’s not a huge issue, and UK films are not always accurate in their representation of US characters either. If you can get past that – and there are far worse examples out there – then there is much to enjoy with this.

Miss Greta Evans (Lauren Cohan), an American Nanny, travels to a gothic mansion to tend to the needs of an elderly couple’s young son Brahms. It is difficult to escape the central storyline in the publicity – the fact that Brahms is a doll initially filled me with reservations. Could such a realisation be taken seriously? Andrew Jones’ series of low-budget projects involving Robert the Doll is good, for example, but suffers a little when the prop figure is required to move.

There was little need to worry: this is a cracker: restrainedly directed by William Brent Bell at least initially, and written in the same way. Greta is just as incredulous as to the notion of a living doll as the most cynical audience member, and yet when she has reason to be convinced if the reality of its existence, we are too. Brahms is a ghostly looking, handsome doll, sometimes very life-like and often lifeless, as necessary.

Greta’s willingness to care for Brahms is reasoned by a miscarriage she suffered at the hands of an abusive relationship with a character called Cole (Ben Robson). Cole suddenly turns up at the house demanding Greta returns home with him. He is, of course, exactly the kind of overbearing bully we want him to be – and then we can begin the business of desperately wanting some punishment for him. This is when the pace moves from slow-burning build-up to pure horror. When the resultant manifestation of Brahms reveals itself, the fragile build-up takes a step back in favour of Jason/Michael Myers territory; whilst this doesn’t carry the same kind of emotional weight we’ve enjoyed so far, it is still effective. The finale explains things away and makes sense of it all, but there is a slight disappointment that the spell has been punctured with reality. As a whole, though ‘The Boy’ works beautifully, far better than I expected it to.

The Boy (aka The Inhabitant) review by Mark McPherson - Cinema Paradiso

Again with the “creepy” dolls. A doll has never been a particularly scary movie monster. They’re small, relatively fragile and they’re especially fun to kick out of a window. This new era of evil dolls seems rather soft as well considering they only move when you’re not looking and usually by some outside for. The doll itself has been reduced to more a tool than a being that destroy your house or slice at your heels.

That being said, I was surprised at how The Boy did a decent job at wrapping me into its weird mystery. Greta (Lauren Cohan) finds the perfect escape from her recent abusive relationship with a temporary nanny position in the United Kingdom. The Heelshire couple appears strict and old with their vintage mansion, but still seem approachable and reasonable. They politely ask for Greta to watch their son Brahms who sounds like a nice enough child. The only catch is that Brahms is a wooden doll. Though Greta is given specific instructions for a daily schedule of activities for Brahms, she neglects this duty and decides to take it easy in the creepy old house while the parents are away on holiday. The local delivery man who keeps the house stocked on food shares her sentiment.

But - wouldn’t you know it - the doll starts appearing in odd places around the house. Items start disappearing and are strewn about throughout the house. Could Brahms be alive or is Greta going crazy? At any rate, Greta initial freaking out subsides after she realizes that tending to Brahms isn’t so tricky or even all the creepy. Sure, he may play with things that he shouldn’t in the house and he has a tendency to play hide and seek when you’re not looking. But that’s essentially kids in a nutshell. Heck, if that’s all kids did, this is the nicest one you’d hope to be watching. The doll doesn’t even backtalk or move when you’re in the room. Even better, if Brahms seems to frighten you, he’ll try to make peace and leave a sandwhich by your door. This is the nicest “creepy doll” I’ve ever seen in a movie.

As Greta slowly develops a relationship with the delivery boy and share in her discoveries about Brahms, her investigation of the real Brahms becomes intriguing. We know the doll is based on an actual son the Heelshire family had, but don’t know much about the specifics on his death. This desire to learn more about Brahms comes off more as a sense of understanding rather pointlessly walking through haunted house origins. It’s aspect I rarely care about in these horror movies, but The Boy gives enough of reason to show some interest.

But then the third act arrives and all the creativity in the script is quickly sucked into a black hole of horror movie cliches. The movie starts becoming dark, violent and creepy out of necessity. It just wouldn’t be a horror movie unless you have some freaky looking character chase people through a house and brutally stab them. This element appears almost random as if the filmmakers had written themselves into a corner and fell back on typical third act horror writing. Granted, I wasn’t expecting The Boy to end with an enduring heartfelt finale, but this just felt random the way it crowbarred in all of the violence and terror at the very end.

Actually, I take that back. I did want to see The Boy end on a more touching note since the movie builds it up as such. Pulling a “gotcha” plot twist towards the end just screamed of laziness the way I’m sure it made audiences roll their eyes. There was a lot to explore with the concept of Brahms - something worth being emotionally invested in as opposed to simple frights. But The Boy just doesn’t have enough faith or ideas to carry this concept all the way home.