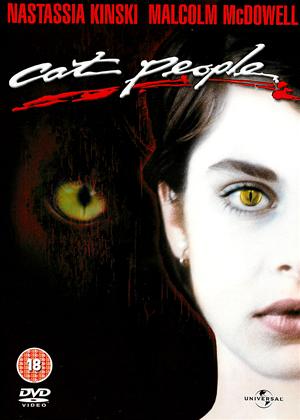 Synopsis:
Nastassia Kinski stars as Irena, a beautiful young woman on the bridge of sexuality; she discovers love for the first time only to find that the explosive experience brings with it tragic consequences. The tremendous passion of this girl's first romantic love is so strong, however, it by-passes the chaos around her-including her brother's (Malcom McDowell) extraordinary demands - as it pushes her on to her own bizarre destiny. With a style as timeless as myth, Cat People is an erotic fantasy of the passion and terror that surround this girl's first love. Desire... passion... blood, her lust transforms her into one of the Cat People.
Actors:
Nastassja Kinski, Malcolm McDowell, John Heard, Annette O'Toole, Ruby Dee, Ed Begley Jr., Scott Paulin, Frankie Faison, Ron Diamond, Lynn Lowry, John Larroquette, Tessa Richarde, Patricia Perkins, Berry Berenson, Fausto Barajas
Directors:
Paul Schrader
Producers:
Charles W. Fries
Writers:
DeWitt Bodeen, Alan Ormsby, Paul Schrader
Studio:
Medium Rare
Genres:
Horror, Thrillers

The late David Bowie (I still can’t get used to using his name in a past tense) lends his voice to Giorgio Moroder’s heavily synthesised soundtrack to this remake of Val Newton’s 1942 original. Sadly, the music dates the production more than anything else.

At nearly two hours long, ‘Cat People’ takes a while to get going, and even when it does, it comes in fits and starts. Nastassia Kinski and Malcolm McDowell are superbly cast as a somewhat creepy brother and sister – Kinski managing to exude both a virginal and sultry air that attracts John Heard as hunky-but-bland zoologist Oliver Yates. More than once, the film threatens to become too brooding for its own good and stumbles into dullness. But as things roll on, as Kinski’s splendid Irena embraces her blooming sexuality, her brother Paul experiences a disappointing turn in his sex-life, indicating their sibling relationship polarizes aspects of each other’s lives – and things become infinitely more interesting (and graphic). The incestuous relationship between them was echoed by their parents, suggesting in-breeding as one reason for their heightened personalities.

The film comes full circle, with Paul and Aretha making their way across the surreal dusty, orange landscape that opened ‘Cat People’, towards a magnificent tree with its branches occupying resting black leopards. This scene brings with it a sense of surreality which acts as a welcome break from the comparatively unexceptional normalcy up until this point.

Unlike the original film, Director Paul Schrader is unable to resist actually showing the transformation between human and feline. It comes far too late in the story to carry any real frights, rather it emerges as a tragic inevitability, sowing the seeds of Aretha’s eventual, haunting fate. I think this is too slow moving to be truly great, but ‘Cat People’ remains an intelligent and enjoyable, sensuous fantasy.