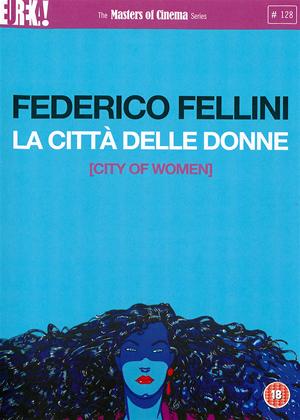 Synopsis:
Federlco Fellini's epic 1980 fantasia introduced the start of the Maestro's delirious late period. A surrealist tour-de-force filmed on soundstages and locations alike, and overflowing with the same sensory (and sensual) invention heretofore found only in the classic movie-musicals (and Fellini's own oeuvre), La citta delle donne (City of Women) taps into the era's restless youth-culture, coalescing into nothing less than Fellini's post-punk opus. Marcello Mastroianni appears as Fellini's alter ego in a semi-reprise of his character from 8 1/2, Snaporaz.
As though passing into a dream, the charismatic avatar finds himself initiated into a phantasmagoric world where women - or an idea of women - have taken power, and which is structured like an array of psychosexual set-pieces - culminating in a bravura hot-air balloon that decisively sticks the "anti" up into "climax". A great adventure "through the looking-glass", as it were, of Fellini's own phallic lens and life-long libidinal ruminations, La citta delle donne sharply divided critics at the 1980 Festival de Cannes, some of whom had merely anticipated a nostalgic retread of the earlier Mastroianni works. What they were greeted with, and what remains today, is, in the words of Serge Daney, "a victory of cinema".
Actors:
Marcello Mastroianni, Anna Prucnal, Bernice Stegers, Jole Silvani, Donatella Damiani, Ettore Manni, Fiammetta Baralla, Hélène Calzarelli, Catherine Carrel, Marcello Di Falco, Silvana Fusacchia, Gabriella Giorgelli, Dominique Labourier, Stéphane Emilfork, Sylvie Matton, Meerberger Nahyr, Sibilla Sedat, Katren Gebelein, Alessandra Panelli, Nadia Vasil
Directors:
Federico Fellini
Producers:
Franco Rossellini, Renzo Rossellini, Daniel Toscan du Plantier
Writers:
Federico Fellini, Bernardino Zapponi
Aka:
La città delle donne
Studio:
Eureka
Genres:
Classics, Comedy, Drama, Romance
Countries:
Italy

Reviews (2) of City of Women

"A scoundrel never changes" - City of Women review by RJ

On first viewing, I hated this. I could barely wait to compose my withering one-star review. I found it garish, unpleasant and vulgar. But in the hours after watching it, I found myself considering why I had such a strong negative reaction to it. One thought kept occurring to me, which was to wonder whether I was perhaps being a bit prudish and above all whether, as a man, I was a little bit squeamish about engaging with a film which is so nakedly about male sexual desire and the objectification/fetishization of women. I did a bit of reading about the film and resolved to try again.

My second viewing was far more rewarding - although I still won't be declaring this a masterpiece anytime soon. The film is called City of Women and has a cast of women that must run into the hundreds, but it is not actually about women at all. It is about male sexual desire, specifically Fellini's sexual desire, and how this is affected by changes in societal attitudes to women through feminism and women's liberation. Marcello Mastroianni as Snaporaz is once again the proxy-Fellini. The whole film is Snaporaz's dream, which begins with his sexual urges inadvertently leading him to a hotel hosting a grotesque carnival of absurd, caricatured feminists who harass, terrify and bewilder him. Escaping them, he finds himself on the receiving end of aggressive, unwanted sexual advances at the hands of a woman he finds stoking the furnaces of the hotel, before another terrifying encounter with a group of teenage female electro-new wave punks who appear almost as an alien species to Snaporaz. This encounter takes place in a kind of post-apocalyptic landscape, a clear metaphor for the wilderness Snaporaz finds himself in following the collapse of his pre-feminist values.

His next encounter however, does allow him some respite. Dr Katzone has literally barricaded his house against the encroaching feminism which is a threat to his way of life (he is holding a party to celebrate sleeping with his 10,000th woman). The feminists in this instance are depicted as lesbian nazis, whilst Katzone is revealed to have a deep obsession with his late mother - subtlety is not Fellini's weapon of choice. It is whilst luxuriating in this embodiment of the celebration of male sexual desire that Snaporaz runs into his wife. It is suggested that Snaporaz's obsessive sexual fantasies about the 'perfect woman' have made him impotent in his marriage. Pursuing the elusive Donatella, who appears throughout the dream/film as the representation of Snaporaz's fantasy woman (she is at both the feminist carnival and at Katzone's conquest party), he believes himself to be on the verge of an exciting sexual encounter - only to be confronted once again by his wife and his impotence.

Snaporaz then journeys through his own memory, encountering the various women who awoke and subsequently shaped his sexuality, before finally facing a trial at which one of the questions demanded of him is 'Why did you choose to be born male?'. Wondering whether his perfect woman would be punishment or reward, he attempts to meet her - she is represented by a hot air balloon in the shape of Donatella which is subsequently shot down with a machine gun - by Donatella. The perfect woman proves to be a self-destroying paradox.

This is a very self-referential film and Fellini poses a lot of questions to himself without really coming up with any answers. Fellini is certainly self-aware, although I am not quite sure if he goes as far as being self-critical. Probably the most damning indictment of the film is its solipsism and self-indulgence. At one point Snaporaz muses: "A scoundrel never changes. Why should he change? To become what?" Fellini, of course, is the scoundrel and he certainly asks difficult questions of himself here - but he is both asking and answering (or avoiding) the questions. It is a one-sided conversation that no one else, least of all any of the women in the film, get to participate in.

Women on top - City of Women review by MW