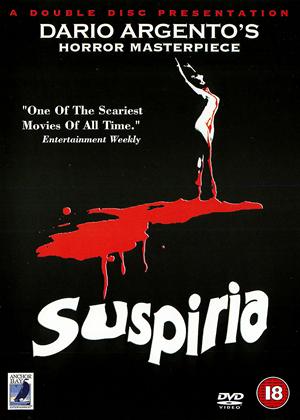 Baby-faced student Suzie Bannion (Jessica Harper) travels to a German dance-school which becomes a living nightmare for her. A selection of disco-lit killings take place before a peripheral character explains the origins of the place, and why it has become such a location of terror.

The unforgiving rain, faces staring, the darkness of night - all these things and more are accompanied (or drowned out) by the relentless, driving musical score. When the soundtrack is not present, it comes as a relief. So huge and all-encompassing is this crashing music that it all but smothers everything, especially the performances. And when something truly dramatic and horrific happens, the accompaniment storms back once again bringing with it an overpowering effect that works against proceedings rather than enhancing them. Equally the sets, so rich in colour and pattern clearly win the fight with the actors in arresting the attention – sometimes effectively, providing a lush, poetic, dreamlike environment, and others simply far, far too decadent not to work with the soundtrack in inducing a migraine. I can understand the intention to make everything heightened and not-quite-real, but whilst it sometimes works, often it is too loud and too much.

The character who does the most to make an impression amidst all around her is Miss Tanner, formidable gravel-voiced dance-instructress. Croatian actress Alida Valli plays her with a prison-officer deportment and ensures Tanner is every bit as fearsome as her reputation within the school suggests.

I’ve seen this described as a terrifying masterpiece of Italian cinema, but the overall effect, although commendably original, is mostly lost on me. Perhaps I prefer something slightly more subtle. That said, the last 15 minutes racks up the horror content rather and ensures that the experience at least ends on a high.

Gothic Horror Dialled Up To 11 - Suspiria review by GC

You know what Dirty Harry says about opinions - here's mine:-

Suspiria is an extremely classy horror film in the Italian cinema tradition. It is high on style and production quality, but might just leave you feeling that it's somewhat over the top and unrealistic.

The overall effect on a large screen is almost of watching a theatre-piece. The director seems to have used a lot of theatrical lighting and sound techniques to add to the sense of unease - occasionally the colours are saturated and hyper-vivid, and the dynamics of the folie and score might have you reaching for the remote to turn the levels down occasionally.

If you're a fan of Gothic Horror then this should appeal:-

A conspiracy of nature and coincidence against the leading protagonist - check

Shrieking soundtrack and ominous foreboding at every turn - check

If you like the films of Roger Corman starring Vincent Price, or Roman Polanski's horrors, but wished they were more visceral, this could be for you.

Personally, sitting alone in the dark in my weird house I thoroughly enjoyed this.

There is something in Italians - and the Spanish - which seems to make them rather blood-thirsty in their art. Look at the paintings of Goya. The French call it 'Grand Guignol' - and there's a lot of that here, lots of ketchup-coloured fake blood and, no doubt, what critics would now call exploitation of young pretty women who get 'done in'.

The first time I tried watching this, I turned off after around 10 minutes as it was too bloody and I wasn't in the right mood. Later I watched it all the way through - and it's a very 'of its time' 1970s Horror flick which the Italians churned out in that decade. Not half as clever as it thinks it is though. It is, at the end of the day, trashy horror with an absurd plot and often cartoony characters. Like Hammer Horror but pushing the boundaries of what the censor allowed in the 1970s but giving it 'Sam Pekinpah' levels of gory blood-soaked scenes. It is what it is.

One note on the music - a very radical, for the time, synthy soundtrack which o doubt sounded hyper-modern and cool at the time, but which now sounds very dated: nothing ages so fast as a vision of the future. I still enjoyed it though.

The early scene where our heroine is transported to the school in a taxi will provide all the evidence that you need to establish the credentials of this as a "horror" film. It goes on and on and on and on... and all that happens is that the camera switches between the 'rabbit in the headlights' stare of our Suzy and the 'terrifyingly spooky' trees outside - too shocking for me; NOT!