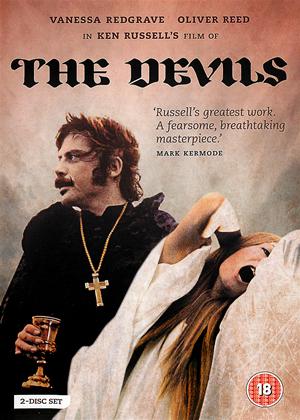 Reviews (1) of The Devils

Ken Russell's films got steadily more and more nuts until his career was in ruins, but in 1971 he was still being given pretty large budgets to play with, and although the content of his movies was already extreme, it wasn't totally out of control, and they still made sense. This was the first and best of the full-blown crazy Ken Russell films, and it's almost a masterpiece.

Of course, like all movies claiming to portray real historical events, it's a wee bit exaggerated. For instance, Louis XIII, though he was probably gay, certainly wasn't an outrageously camp screaming queen, and he was a competent ruler, not a spaghetti western villain who used political prisoners dressed as birds for target practice! And like all Ken Russell films, at times it's badly compromised by overacting. Vanessa Redgrave can be forgiven, since it's hard to be subtle when you're playing a mad sex-crazed hunchbacked nun who thinks she's possessed by the devil, and all things considered, she's actually very good, but the two evil apothecaries (one of them played by Brian Murphy, an actor more usually associated with sitcoms - he was the male half of "George and Mildred") really ham it up as bizarrely ill-advised comic relief. And Michael Gothard somehow manages to overact even by the standards of Ken Russell films in the rôle of an exorcist who makes his unfortunate clients seem almost sane by comparison.

However, it looks magnificent, if sometimes repulsive, with graphic scenes of torture, death by fire, and much else that isn't very nice. And holding it all together is Oliver Reed giving the performance of a lifetime as Father Grandier, the flawed and hopelessly uncelibate priest who makes far too many enemies both personal and political, and has to be disposed of through a grotesquely absurd show-trial presided over by hypocrites and madmen. Reed, not yet beginning to bloat from the industrial amounts he was drinking, is superb as an imperfect man trying to be as good as he can be, and ultimately becoming heroic, and in the latter part of the film he totally dominates every scene by being the only believable character on screen. By the way, what his torturers do to him really did happen to the real Father Grandier, and isn't exaggerated at all.

If you can cope with some genuine nastiness and a great deal of astonishingly bad taste, this weird hybrid of "The Exorcist" and Terry Gilliam's "Jabberwocky" is absolutely unique, and makes you wish Ken Russell had made a lot more high-budget horror and fantasy films than he did. I hope one day they get around to releasing a Director's Cut restoring all the scenes the censor removed that went even further than what's on show here. Yes, really!