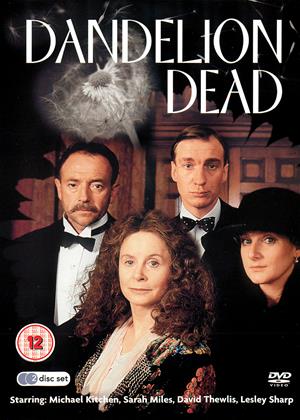 Synopsis:
Dandelion Dead is a dramatization of the true story of Major Herbert Armstrong, a solicitor equally proud of his work in the justice system as he was of his beloved garden. Life seemed good for Herbert, a respected solicitor with country estate, the love of his three children and a devout pride in both his life and his garden. But Armstrong, pillar of the local community, was also a man at war. He was in conflict on three fronts: he fought regular battles against his domineering and unstable wife, Katherine; he had regular skirmishes with his bright and ambitious business rival, Oswald Martin; and waged a war against the dandelions that colonised his treasured lawn.
These dandelions led to one of the most celebrated murder trials in British legal history.
Actors:
Michael Kitchen, Sarah Miles, David Thewlis, Lesley Sharp, Peter Vaughan, Diana Quick, Bernard Hepton, Don Henderson, Robert Stephens, Chloe Tucker, Alexandra Milman, Joseph Steel, Lucy Jenkins, Roger Lloyd-Pack, Patrick Godfrey
Directors:
Mike Hodges
Writers:
Michael Chaplin
Studio:
Acorn Media
Genres:
Drama, TV Courtroom Dramas, TV Crimes, TV Dramas, TV Mysteries

It;s a familiar story: man decides to solve personal and professional problems by following the murderous route. If you've seen the very fine 'Murder Aforethought' with Hywel Bennett you'll feel as if you're treading over old footprints, but some productions are so good it doesn't matter, and 'Dandelion Dead' is one of them. The photography is splendid, the script is electric; but over and above everything, the acting. When Sarah Miles is in the grip of arsenical poisoning; when Bernard Hepton and Peter Vaughan have quiet, heated discussions; when David Thewlis in turn pursues Major Armstrong, and then endeavours to evade him, we can only watch in admiration at craftspeople of the highest order at work. And then there's Michael Kitchen. It's hard to know what to say without dropping into Trumpean hyperbole. If today's big name stars had a fraction of this man's talent I wouldn't need to rent or buy DVDs of programmes and films from the past to see how it's done. They don't and I do. A flicker of the eyebrows, a small turn of the head, the voice rising or falling by half a tone, the timing of when or when not to speak. Relax, sit back, you're in the hands of a master.

'Dandelion Dead' is based on a true story, and I can't help thinking that the film-makers have made Major Armstrong a more winning personality than he really was. There are intimations of his weak, even craven character hiding behind the smiles and polite confidence, but the cynical nature of a very rich man, used to prominence and privilege, who believes that murder is preferable to abandoning his position, is hardly touched on.

There are minor problems too with subplots such as the courtship and marriage of David Thewlis's character and Connie, played by Lesley Sharp. These scenes may be well done, but add nothing to the main story, and even make the second part drag slightly.

There was once a time when British television was the envy of the world. Creeping Americanisation (screaming audiences; noisy quiz shows with stunningly stupid pauses before the answer supposedly for dramatic effect; cop programmes with sound effects and background music so loud it's impossible to hear the words mumbled by the woeful actors; who can bake the best jaffa cakes; celebrities of astonishingly inept talent appearing everywhere and anywhere; the eating of rainforest wildlife for infantile entertainment) has ensured this is no longer the case. 'Dandelion Dead' is a very late (1994) example of why such esteem was once held.