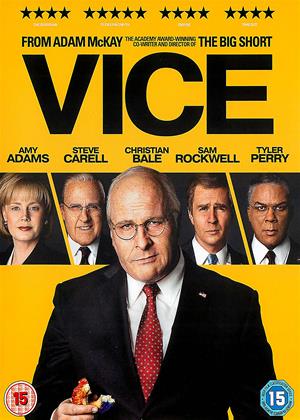 But the movie itself I found really slow and boring - I suppose if you're American, esp if you're a liberal who hates Cheney and Republicans, then you'll like this more. For me it was dull, and I had to rewind in parts and check subtitles not to miss anything in the montage. Watch HOUSE OF CARDS US version first 4 series or UK series for a brilliant drama. Not this.

It's all very tricksy and post-modern, thinking it's cleverer than it is! Like fake credits half way through, or the narrator 'twist' towards the end (NO SPOILERS) which is the same as the twist I have read in 3 separate novels! It's not that clever, really. Dull, yes, and TOO DAMN LONG.

Thing is, you could make a hatchet job like this about ANY politician - Obama, for example - and PLENTY of people have alcohol problems. Remember that the USA is a democracy and the people voted for Trump and George W too. In fact, I recently watched a movie re surveillance by the US govt (cannot remember the title) and Obama was fingered to that, allowing the CIA etc to monitor ALL emails and calls. I just do not believe the 'liberal conspiracy theory' either, no matter how much so many want to.

There's a silly bit after a few minutes of the end credits so watch on.

Glad when it finished.

I disagree with most of the other reviews as I give this movie 4 stars and loved it.

Very clever script that combines mind blowing revelations about the dirty business of American Politics, with the humour of Cheney being promoted above his intelligence or pay grade - a frightening situation.

Christian Bale is superb, as usual, in fact the whole cast work well together.

The moral of the movie is NEVER TRUST A POLITITIAN.

Gave up watching it - Vice review by MH

I can't say too much abut the film as my wife and I stopped watching it after the first half hour. What we watched was rather boring and uninteresting

Interesting film about the life of Dick Cheney, George W Bush's Vice President, and his rise to the elevated state of the VP and the manipulation (if the film is to be believed) that went on to get there and stay until the end go George W Bush's time in office.  The one question the film does not answer is why did Cheney not seek the nomination to succeed President Bush?  Watchable but an interest in world affairs is a big help in following the story line!

Boring part of American history compared to other juicier bits that could choose. Bayle is twice the size of the Machinist role. Mumbles a lot. That does not mean you get an Oscar!

Sam Rockwell has played some very spooky parts. Still has the edge to him as Bush, but is the only light in the film. Carrell is with teeth set again.

Somebody trying to score points with a film by the looks. Quite a lot may be correct. Even more may be implied with smoke and mirrors. Who knows? Cheyney prob blown another valve when/if saw the film.

Wow. Christian Bale was great. He changed shape, walk and mannerism over time. The script was very Big Short, which is no surprise considering the writers area the same. Some good exposition for non Americans.

This film gives a different view of of Bush than "W". A weaker character almost subjugated by Charney. Which is real? We'll never know.

Wow, a master class in acting from Christian Bale and in fact all actors involved. Not a story I thought I'd find compelling, but it really gripped me even though I knew the outcome of a lot of it. Can thoroughly recommend.

I was three quarters of an hour into this film and could stand it no longer. Could say I lost interest, or I'd lost the plot more like.

Definitely not my type of entertainment and will stay away from political dramas from now on.

We thought this was a really clever script, based on a reality that most folk never saw. Cheney really was the almost Invisible Man - lacking the charisma to win the post of President, as  Vice-Presidenr he used the younger (and extremely politically green) Bush as a mouthpiece for all his destructive policies.

You’ve had several negative reviews - this is certainly a  thoughtful and angry movie, not a mindless rom-com or whizz-bang never-mind the lack of plot just look at the special effects movie.

Warm-hearted insights into the workings of The World’s Greatest Democracy, and the ratchet that led to Trump.

Creative use of the narrator and inventive editing provide the context and the irony, principally through flashbacks. Christian Bale and Sam Rockwell excel as Cheney and Bush, joined by the ghouls of Mrs Cheney, Rumsfeld, Rove and Rice, all looking after number one. Giving Cheney a second heart didn’t work, yet the rest of the world is still living through (barely, in many cases) the legacy of the Cheney-Bush era.

I remember being so surprised and rattled by Adam McCay’s The Big Short. It wasn’t merely because McCay, most known for more raunchy comedy pictures, was able to push out a thoughtful historical bio-pic but also for how the film presents itself. The Big Short took aim at the big banking crash of 2007-2008 that provided a clever and angering picture of how corrupt and damaging banks were in trying to get as many loans out as possible. There are funny bits where Margot Robbie in a bathtub explains certain loans and angering ones where Steve Carrel gives a forlorn struggle to find the holes in the sinking ship, too late to do anything.

Now McCay turns his new style of film-making to the 2000's with the Vice Presidency of Dick Cheney. There’s a lot of ground to cover here and it all feels like fairly safe territory considering most of Cheney’s career focuses around business. And then there’s the whole ordeal with George Bush Jr. and his Presidency of flawed and messy tactics. And Donald Rumsfeld. And how the presidency handled 9/11. And war. And oil.

This isn’t the first time this weird legacy had attempted to be covered, as with the 2008 film W, comically documenting George Bush at the end of his presidency. It was a somewhat sloppy production but now with a decade to digest, perhaps McCay can sift through the muck of it all to make better sense of the events. He certainly has the cast for it. Christian Bale melts into the role of Cheney, donning thinning hair and a bigger belly to make that aged and winded figure come to a certain sort of life. Sam Rockwell perfectly plays Bush as a man who seems somewhat lost in the weeds as he tries to do what he believes is best, especially in a post-9/11 world. He relies on Cheney to spin the wheels of the campaign and the presidency, to such a disturbing degree that it appears Cheney provided more influence and damage than Bush could have ever hoped to achieve.

But so what? Is any of this new or revealing of the Bush/Cheney legacy that hasn’t already been divulged in countless documentaries, books, and revealing documents? It’s a shocking turn from the more vocal and alive appeal of The Big Short, where the usual style, vigor, and rage seem to have subsided. Rather than dig a little deeper to find the why and the emotional ravaging that Cheney brought to the political landscape, the film goes into a droning mode that seems more attuned to finding stuff for this ensemble cast to do than say anything all that interesting about the very sharp and scathing series of political events over the course of a decade.

Vice feels like such a waste for how much talent is present. Bale has set the bar extremely high as one of the best portrayals of Cheney I’d ever seen, albeit that it’s a low bar with so lukewarm satires over the years that don’t even come close. So why not make the film more about him? Why not drill down into this savage and savvy business man who plowed his way into politics and try to find something more? It’s even more unfortunate that McCay’s bag of tricks in taking on how problems of the past have shaped the world we live in today. To give you an idea of how embarrassing this dissection must’ve been, a deleted scene features Cheney’s strategies in a cafeteria being explained in the form of a musical number. That moment, if left in, would’ve given off a nasty aftertaste akin to The Greatest Showman, where the wool is pulled over your eyes, making you believe you have seen something politically astute when it’s more of a woeful waxing.