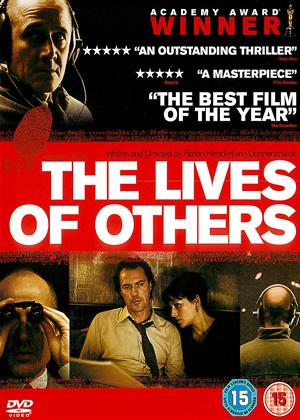 Synopsis:
In this outstanding psychological and political thriller, we get a fascinating insight into the lengths and depths that the East European government went to in order to keep tabs on the lives of its population in 80's. When cold and brutal official Wiesler (Ulrich Mühe) is given the task of spying on acclaimed playwright Dreyman (Sebastian Koch) and his actress girlfriend, he relishes the task, knowing that if he uncovers subversive behaviour he will gain favor with his boss. But the longer he listens in on the couple, their friendships, passions and ideas, the more he realises that his own life and the harsh political regime are lacking in color and joy in many respects.
Slowly he begins to doubt morality of is job and politics. As the lines between orders and compassion become blurred, Wiesler becomes more involved with his subject, walking a dangerous path between his duty and his new found reality.
Actors:
Ulrich Mühe, Martina Gedeck, Sebastian Koch, Ulrich Tukur, Thomas Thieme, Hans-Uwe Bauer, Volkmar Kleinert, Matthias Brenner, Charly Hübner, Herbert Knaup, Bastian Trost, Marie Gruber, Volker Michalowski, Werner Daehn, Martin Brambach, Hubertus Hartmann, Thomas Arnold, Hinnerk Schönemann, Paul Faßnacht, Ludwig Blochberger
Directors:
Florian Henckel von Donnersmarck
Producers:
Quirin Berg, Hubert von Spreti, Max Wiedemann
Voiced By:
Klaus Münster
Writers:
Florian Henckel von Donnersmarck
Others:
Julio Chávez
Aka:
Das Leben Der Anderen
Studio:
Lionsgate Films
Genres:
Drama, Thrillers
Countries:
Germany, Top 100 Films, Drama, Thrillers
Awards:

Reviews (17) of The Lives of Others

Brilliant - The Lives of Others review by CP Customer

This movie is excellent! I loved every bit of the movie. A real peace of art!! Can't wait to get the DVD.

Facing up to Stalinism - The Lives of Others review by Kurtz

A heartfelt and moving account of life in the DDR. Stately and impresive rather than a gripping Bruce-a thon, it boasts nonetheless some intensely watchable performances from top German stage actors. The fact that some people had the courage to speak out against an all-seeing, all-knowing regime who had the power to ruin the life of anyone who stood against them is hard to take in when you've grown up taking everyday freedoms for granted, but the key message of "The Lives of Others" is that the desire for personal freedom is contagious and that no-one is immune.

Must see - The Lives of Others review by CP Customer

Another German movie about its recent history and thus also European history. The story takes place in the mid-80's East-Berlin and shows to which lengths the regime went to control and sometimes destroy citizens who weren't "good socialist citizens". Excellent actors and GDR details spot-on. After "Downfall/Der Untergang" and "Sophie Scholl" a German film everone should see.

At first I thought the film would be dissapointing as it seemed slow and grey! Good job we stuck with it. First impressions were setting the atmosphere for the unfolding narrative for a time that is alien to our society now. The characters are well portrayed, the twists to the plot are subtle and the storyline kept the viewer entralled. By the credit role we couldn't believe our luck in coming across such a fabulous film, my 16 year old son thoroughly enjoyed it.

Gripping - The Lives of Others review by RP

Set in 1984 East Berlin the film is German, with subtitles. But please don't let that put you off - it's superb. That's why it won the 2007 Oscar for 'Best Foreign Language Film' and why it's currently (Jan 2012) at #56 on the IMDB Top 250. Slow moving, yes – but gripping. It tells the tale of a Stasi security police captain (Gerd Wiesler, played by Ulrich Mühe) who is assigned to surveillance duty on an author and his actress girlfriend. But it soon emerges that this is being done for the advantage of a high ranking party official and Weisler becomes aware of the bleakness of his own life, the hypocrisy of the state machinery, and the need to do something. By his actions he assists in the publication of an article in the West German press, ruins his own career, and is the indirect cause of the death of the woman. A really excellent drama – highly recommended. 5/5 stars.

Procedural film about a real dystopia. - The Lives of Others review by Steve Mason

Powerhouse, realistic political drama of a Stasi official in the old East whose loyalties begin to shift as he carries out surveillance on a charismatic, liberal couple working in the theatre. A film that makes you question your own worth and values. Starts slowly, but builds to an amazing ending that will haunt the rest of my life.

If you're discriminating about the films you watch, this is for you. - The Lives of Others review by BM

A beautifully acted and directed film. Don't be put off by the opening sequences, it is "grey" and dour but it builds to an exciting story which is both thrilling, intelligent and sad. The last few minutes of the film are unexpected and watch for the subtle change of expression on the face of the actor at literally the very end of the film...heartbreakingly beautiful!

A masterpiece - The Lives of Others review by TD

A superb study of the repressive regime of the Stasi in pre-eighties East Germany. Ulrich Mùhe excels as the softening Stasi agent, his performance made all the more convincing by his own real experience of being the subject of surveillance. I found great optimism in this film.

Let's be honest from the beginning - I didn't like this film and was vaguely disappointed. It took me a while to work out why.

Basically, I think its because although the film is brilliant, I didn't like it. In addition, it is billed everywhere as a "Thriller", a "Political Thriller" and a "Psychological Thriller", but a thriller it ain't.

Quite rightly, this excellent film has won awards and plaudits everywhere. It is realstic in minute detail, informative, carefully and subtly plotted and scripted, and brilliantly acted. But there's the problem - as another reviewer says, "it seemed slow and grey".

Love can flourish in health & safety regime, my mistake, I mean Eastern European - The Lives of Others review by SC

First few moments of seeing Stasi and interrrogation room I thought oh no what have a let myself in for. The subtle, unusual love story creeps up on you - beautiful in a story running with an abuse of power theme. The state born of pure idealism is shown in its all too human interpretation - job worthiness and bullying. To make a film that is entertainment but with social comment is always genius and this film has both, and a hero to knock the spots off Arnie.

Partial subtitles - The Lives of Others review by CP Customer

We were looking forward to the film but the subtitles were incomplete and missed much of the dialogue. This is a problem for non-German speakers.

3 out of 11 members found this review helpful.
Show more