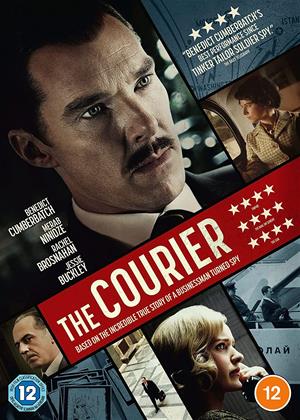 Reviews of The Courier

The Courier (aka Ironbark) review by Mark McPherson - Cinema Paradiso

The Courier is one of the more tactile spy films of the 21st-century. It’s a true story of British and Russian intelligence during the most heated of times during the Cold War of the 1960s. With the Cuban Missile Crisis on the horizon, there’s a lot on the line. To place that burden on a mere businessman may feel like too much for one man. And yet he does, sacrificing more than he may realize for the sake of his country and cultural relations.

Greville Wynne, played by a mustached Benedict Cumberbatch, is the businessman in question. With a rather dull life of meetings during the day and evenings with his wife and son. But then MI6 approaches him with an important task that they delicately try to ask of him. They need Greville to merely go about his normal duties on a business trip to Russia. All he has to do is secretly obtain some top-secret photos of documents from a Russian contact. The KGB are less likely to expect some British civilians of being capable of espionage.

Greville’s contact in Russia is Oleg Penkovsky (Merab Ninidze), a secret agent working within the Russian ministry. He also has a wife and child, making his connection with Greville all the easier. When Oleg ventures off to London, he visits Greville’s family and they have a profound conversation about people from different cultures can still be friends even if their politicians can’t. Indeed, Greville and Oleg start becoming close. And it could be their downfall in their secretive mission.

I dug the way Dominic Cooke directs such a picture with a firm hand and atmospheric sensations of exhilaration and anxiety. Greville’s montage of getting used to checking for bugs and suspecting everyone being an informant of the KGB is kept to brisk pacing so it seems that the businessman is so caught up in keeping his cool he doesn’t think about the possibility of being caught. And yet that fear follows him everywhere, including back at home where he finds himself exploding at his son for being forgetful and sleeping with his wife constantly, fearing it could be his last time.

Oleg is a bit more collected, realizing how deep he may be into this case that it’s impossible for him to escape. His facade is better maintained among his family but his desperation is still coursing through his veins. He’s aware that the slightest change in any of his work could be an immediate red flag that he has been found out. Something as simple as being taken off a business trip or a slightly adjusted book in his house could reveal just how much the KGB knows about his actions.

The tension mounts wonderfully throughout the film, especially for the second act’s crescendo of Greville trying to secretly escort Oleg and his family out of the country. There’s great escalation during this scene that just when we think the two may make it out of Russia without question, they’re cornered and taken away. Their punishments are harsh and sacrifices will have to be made if either of them hopes to see their families again.

The Courier doesn’t really exude any astonishing money shots or feature as many vibrant emotional monologues. It does, however, keep the story personal and relatable thanks to one of Cumberbatch’s most natural performances and the general stoic appeal of Ninidze’s portrayal of Oleg. There’s some cutting back to the CIA and the situation in Cuba for context but the majority of the focus is placed on Greville and Oleg, making their story more than just one that is marred in 1960s politics. The film does settle into the familiar swelling of music and melodrama towards the end where Cumberbatch delivers his most powerful lines of dialogue when shaved and starved within a cold Russian prison. For such a focus, the film didn’t really separate itself as much from other spy films but still presents itself as one that has a bit more faith in its story that it can trim off more of the expositional fat.