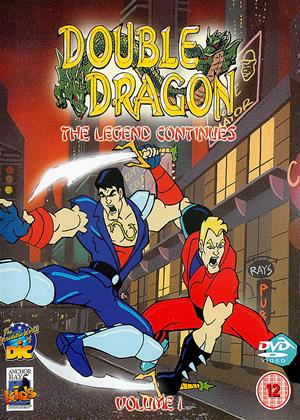 Synopsis:
A 4 animated TV series based on the first 'Double Dragon' video game.

The Shadow Falls
Double Dragon is the story of Billy Lee, Dragonmaster. Billy's parents are attacked by Shadow Warriors, who steal away Billy's twin brother, and Billy is taken to Metro City's Dragon Dojo by his father, John Lee, to be raised by the Oldest Dragon. Trained from infancy in the marital arts and steeped in the non-violent Code Of The Dragon, Billy is appointed as the new Dragonmaster by the Oldest Dragon. A new Shadowboss takes command of the Shadow Warriors and escalates his campaign of terror. Billy helps Marion, a young policewoman, in her battle to stop the Shadow Warriors, and meets Jimmy Lee, the identical twin he'd never known. When Marian and Jimmy are captured, Billy attempts to rescue them. There, the Shadowboss's secret identity is finally revealed - it is Jimmy behind the mask.
The Legend Continues
The evil Shadowmaster appears for the first time, rebuilding the Shadow Dojo and turning Metro City's new Fusion Power Plant into a light-sucking generator to put Metro City into eternal darkness. When Shadowboss Jimmy Lee captures Billy Lee but fails to bring his Dragonsword to the Shadowmaster, the Shadowmaster turns on Jimmy and sends his elite squad of Shadow Warriors to dispose of both brothers. The twins team up to save each other's lives. They return to the destroyed Dragon Dojo, where the Oldest Dragon appears and shows them how to fulfill the legend of the Dragonsword and become the mythical Double Dragons. With their new powers, they save Metro City and force the Shadowmaster back to his dark lair.
The Price of Oblivion
The Shadowmaster invents a new drug called Oblivion and has his Shadow Warriors test-market it in a local neighbourhood where Neil McReady, retired ex-army, has just moved. The drug is highly addictive and addicts roam the streets. When Charles, a neighbourhood kid, is kidnapped by Shadow Warriors fleeing from Billy and Jimmy, McReady straps on his blaster and goes to war. He joins Billy and Jimmy to rescue Charles and put the Oblivion drug factory out of commission, and is inducted into the Dragon Warriors as Blaster.
River of Tears
When Marion gets a tip about an illegal martial arts tourney and the Shadowmaster swears vengeance on the informant, the Double Dragons try to help the young homeless man. But Vortex (a highly skilled martial arts practitioner with a mysterious past), just wants to be left alone to take care of the homeless children he's raising. Ultimately, with the help of Billy and Jimmy Lee, Vortex saves the kids and is inducted into the Dragon Warriors. He regains his memory, recalling that he was trained by one of the best - the Twins' father, John Lee.
Directors:
Chuck Patton
Producers:
Chuck Patton
Voiced By:
Jim Byrnes, Garry Chalk, Ian James Corlett, Michael Donovan, Terry Klassen, Scott McNeil, Wezley Morris, Alvin Sanders, French Tickner, Cathy Weseluck, Carol Alexander, Kathleen Barr, Babs Chula, Saffron Henderson, Mark Hildreth, Sam Vincent, Cusse Mankuma, Jason Michas, Jesse Moss, Brad Swaile
Writers:
Phil Harnage, Chuck Patton
Studio:
Anchor Bay
Genres:
Anime & Animation, Children & Family

Rent other films like Double Dragon: The Legend Continues

Sign up
Superman Animated: A Little Piece of Home: Vol.2

Not released
Superman: The Lost Episodes

Sign up
Visionaries: Knights of the Magical Light: Complete Series