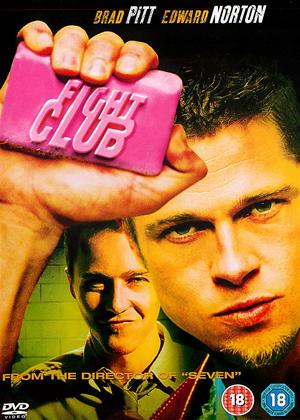 This is an amazing movie based off of an amazing book. Fight Club is in a genre all it's own. The script is very faithful to the source material, they picked my favorite director, David Fincher, and they chose the perfect cast.

Edward Norton plays a character who is not named but is commonly referred to as "Jack", while Brad Pitt takes on the radical character of Tyler Durden, with Helena Bonham Carter playing Marla Singer and Meatloaf rounding out the cast as Bob, the movie has a perfect cast and perfect direction to do what is needed. The settings are all urban and dark, the story twisted and surreal, and the psychological element to the movie is pulled off in an unforgettable style.

This is one of the few movies with a "surprise twist ending" that doesn't rely entirely on the surprise to make the movie. The cinematography and acting are amazing, and there are plenty of cool and witty one liners and monologues to take with you and use in conversation.

A must see of noughties viewing - Fight Club review by MH

Probably Edward Norton's finest film in which he loses his mind and regains it (well kind of) by the end of the film.

This was the killer script that supposedly everyone in Hollywood fought for, one so good even a low ball director could have been guaranteed a winner outcome from material as strong as this, and replete with memorable one liners. If Pitt provides the female eye candy, it is Norton's engaging portrayal as a descendent from a long line of hunter gathers living in a bland, trite consumer reality that is the soul of this film. Fighting this problem, the madness of group behaviour and achieving goals whilst being beaten up are the backdrop for some of the most surprising action that one could expect to watch.

The A*B*C car reclaims decision making process and soap making were the highlight of my first watching.

So......"Listen up, maggots. You are not special. You are not a beautiful or unique snowflake. You're the same decaying organic matter as everything else."

Whether the inserted stills are appropriate or not is in the land of arty types and remains probably its only annoying trait.