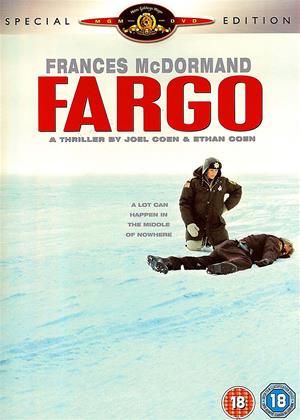 Good but not that good - Fargo review by JD

I think the awards were a little generous. This story is a blend of brutal, unemotional killings and homely scenes of a small town pregnant detective that provides plenty of variety and an interesting plot but the direction was not outstanding, nor the acting. The murders are a fashionable spectre of splashing viscera which I do not think adds to the excitement value. I would rather recommend an episode of Columbo.

This movie is the Coen Brothers best ever movie - it is a brilliantly realised tragi-comedy, where one man's decision leads to both his downfall and the demise of many others. It is straight out of ancient Greek drama actually - but none the worse for that.

The snowbounds scenes are beautifully filmed and make a great change for the usual Noo Yoik or LAla land settings. The Montana (?) accents show a little seen US Scandinavian ancestry, yah!

Superb acting all round; superbly structured unfolding of the tragedy; unusual and excellent music; intricate and believable plot. Everything in this film is spot-on!

The script is where it all starts and that is superb: the main plot is deepened by subplots - the police officer's pregnancy, her old mental friend etc.

The tragedy unfolds inevitably - like watching a car crash in slow motion: there is no way of stopping this juggernaut of consequences, not after the main character Jerry (who has money problems left unspecified) stars it rolling down the hill. You know people are gonna get hurt. Everyone in this movie is attempting to swindle everyone else, with tragic consqeuences. It's like Hamlet in the snow!

Those will small attention spans who want shoot-em-ups and car chases may be bored (but there are actually both in this). This unusual film makes a change from most Hollywood crime stories or TV series.

The acting and direction are brilliant throughout.

This movie well-desrved all its awards and probably should have won the best film Oscar too (I think that pile of piffle Braveheart beat it that year?).

I have watched this movie 3 times and loved it every time!

Highly Recommended. Maximum marks! Five stars with bells on and a sprinkle of snow on top!!!

Saw the TV series first, then this film.

Now I know why the TV series was so good...it was developed on the back of this film. Both female police officers were excellently portrayed, the out of control roller coaster sent events crashing to the inevitable dire conclusion. Excellent film! And TV series...

Yah, a gem of a film - Fargo review by HE

What a plot, great acting, great writing, loved it. It deserves all the accolades it got. Everyone gets their just deserts-just the poor wife and the boy, who were the most tragic of all; their fate as victims of greed and nastiness really made me sad. I hope it was all a story.....

Did try to like it! - Fargo review by BE

I saw this movie when it first came out in 1996 and didn't like it. Having seen Frances McDormand's wonderful performance in the magnificent Three Billboards, I thought that my now being more mature (?) and being more appreciative of black humour, also bearing in mind the accolades Fargo got at the time, that my original opinion of the movie would be changed. It wasn't! Shame.

This thriller is brutally brilliant!

An excellent plot that unravels in a thrilling fashion with a smattering of dark humour thrown in and a superbly psychotic performance from the Steve Buscemi.