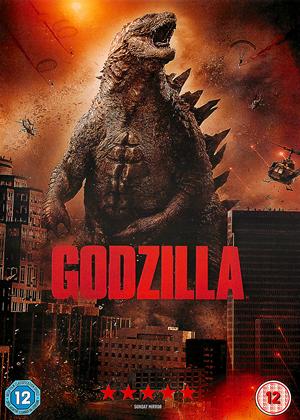 When I were but a mere slip of a lad, I sneaked into the local cinema to see a viewing of the X-rated Japanese original. It was dreadful - not at all scary and the 'monster' was not at all monstrous. I remember being very disappointed - but then I was too young to appreciate its socio-political message.

Back in 1998 I quite enjoyed the remake although it was critically panned, but the roles of Matthew Broderick (too boyish) and Jean Reno (perhaps too closely associated with 'Léon') were just silly.

So I was looking forward to the 2014 remake. But it's disappointing stuff - how can you have a film titled 'Godzilla' without Godzilla? It's a 2 hour film, but he's only in it for the last few minutes!

The rest of the film is largely about a different monster - the MUTOs - who seem to like a nice warm, radioactive environment. One in Japan, one (of course) in the USA - and of course, when they get together they breed - and mankind is rescued by Godzilla and his fiery radioactive breath. Mankind may be safe, but LA does suffer a bit.

So, too long, silly acting, silly over-complex story, silly made-up MUTOs - is there anything good about it? Yes - Godzilla actually looks like the 1950s Japanese original :)

Thank god they remade this after that dreadful Godzilla back in 1998, that had dreadful acting and a Gadzilla that was nowhere big enough and with childish scenes. This was made a lot better with a massive Godzilla the only dissapointing thing for me was that Godzilla wasn't in it enough. I did really enjoy the film though.

Not what I expected - Godzilla review by CP Customer

I have never seen any version of Godzilla before, so really had no idea what to expect, and i have to say I was a little bit let down. However overall it is a good movie and well worth watching. Amazing special effects.

I enjoyed the film and had a new twist to it. Rooting for godzilla and one part no spoiler! had me going yes! Passable movie and actors.

I enjoyed watching this movie. It's way better than the blockbuster Godzilla from a few years ago, but not as hilariously funny as the 1950s Japanese version.

The radiation issue was cleverly folded into the plot and backstory.

Anyone complaining that Godzilla wasn't on screen enough just does not realise the way a story needs to build tension; in Jurassic Park the dinosaurs were on screen for only 6 and a half minutes! OK, so this is not up there with that film, but it's a good effort and I had no issue with the MUTOS - mega moths who eat radiation. Godzilla needs an enemy! Mankind needs jeopardy (will the mutos breed?) All decent plotting actually.

Loads of CGI, of course, with hundreds of digital artists credited, but that's true of most movies these days.

The acting is fine - with 'nowhere boy' Aaron Johnson doing an American accent (as so many Brits have to do these days, coz Brits in these sort of films are always either the baddies or the boffins or the totty...)

The film was perhaps a tad overlong - and some subtitles need a serious edit by someone who is literate in English.

But for a good fun monster movie, this does the job. 4 stars.

Monster bore - Godzilla review by AS

If you enjoy the speed and excitement and originality of modern sci-fi, stay away from this. Gareth Edwards' effort is as clunky as a 1950s B-movie - but nowhere near as gripping. This is supposed to be cutting-edge CGI: Ray Haryhausen did it ten-times better with stop-motion 50 years ago. Much of the plot makes no sense; the acting has no depth; half the characters are irrelevant; and with so many scenes being nothing more than padding the whole farrago clatters on for at least an hour too long.

Great film if your are after a good action film with some cool monsters in it.

After the 1990s version were Godzilla had been on some sort of diet plan I was very relieved to see a far more true to the original Godzilla on the screen, and man he's a handsome beast. You do have to wait a fair time to see him and then you don't see most of his first major fight but I suppose they wanted to keep that for the end.

A bit slow to get going and only Godzilla from the original monsters fighting against some new flying thing, would have been great to see him against one of his old adversaries but you can't have everything.

Good solid entertainment, not a classic Godzilla film but man he looks great!!!

Watchable if you like this sort of film... - Godzilla review by CH

... but don't expect too much. I can see what they were trying to do with it and it does create some back story that can be expanded in other films. Not much that's really new though and the action isn't anything particularly memorable. Some good cast members, which helps, but does feel like the big names were underused.

We loved it - Godzilla review by PJ

Ok first off this is an interesting film as it seems to divide people. Bring the Gozilla story up to present day the film manages to include quite a few nods to previous Godzilla films (Japanese). Taking the subtext of the first film - that of a commentary on dropping nuclear weapons on Japan and linking it to present day. Bringing new monsters (ironically the name directors first film) in to play. If you've watched any 1950s/60s Science fiction monster films you kind of know where this is heading. There is a lot of nods to various films. It also has some of the most impressive CG I've seen. A lot of shots you don't even notice it. The view point of the camera always tends to be from a realistic point of view often with people in shot to give you sense of scale and scale it gives you. Godzilla is 300ft tall and it is shot to give a really sense of scale.

It does take its time to get to the money shots and even then doesn't rush into them. If your a fan of the original films you will probably enjoy this. If you want instant gratification then look else where.

I’ve said this many times about many other films from World War Z to The World’s End but Godzilla is a film of two parts much like the others and whenever I point out this fact i find that one part is always intrinsically better than the other. Godzilla’s problem is that its first chapter is so riveting and compelling in a conspiracy thriller kind of way that the films latter half, a Pacific Rim-esque brawl through half of America fails to even capitalize on what the film's opening minutes tried to achieve making the whole film a loud, destructive mess that doesn’t even provide a decent fight.

Godzilla follows Ford (Aaron Taylor Johnson), a marine who upon returning home is forced to travel to Japan to bail his father Joe (Bryan Cranston) out of jail. However when his father enlists him for a conspiracy mission surrounding Ford’s mother and how she died they uncover far more than they imagined leading to a shocking showdown between a creature no one has ever seen before, the dreaded Godzilla.

While this is pretty close to fine art in comparison to its 1998 counterpart there is very little subtlety to this tale of dominance and human stupidity. Not only is Godzilla a creature the films characters fail to understand but its a looming threat to the films exceptional paranoia factor, something that literally vanishes upon first glimpse of the mysterious monster. Even while the film avoids shots of the dreaded beast in favour of a sense of ambiguity its still clear what he is and where the film is headed leaving nothing to the imagination, ruining a buildup better than the actual payoff.

The most upsetting thing about Godzilla however is how it squanders its cast and drops sub plots with no plans to pick them up at a later point. The film features some excellent performances from actors like Cranston and Johnston but never quite takes advantage of the characters in the right way. While Cranston anchors the first act with a sense of impending doom his presence is sorely missed in the later acts as the film crumbles before the image of a giant unstoppable monster, a creature that while imposing makes the films conclusion predictable and dull making for just another monster mash up with little to show for it.