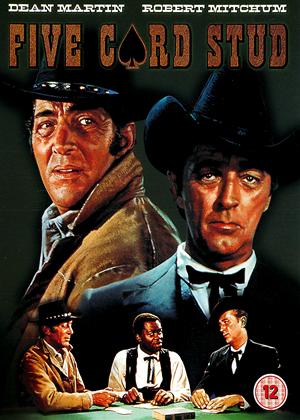 This rather odd western obviously means well, but it attempts to combine genres in a way that doesn't quite work. Dean Martin, an actor I have very little time for, isn't as self-indulgent as usual (apart from singing the slightly silly theme song), but he's still inadequate as a leading man in a movie which is unsurprisingly stolen from him by Robert Mitchum, despite the latter having far less screen time. Mitchum pulls off the rare trick of being a gunslinging hellfire preacher in a slightly over-the-top western who can preach a sermon which is actually believable and doesn't make him sound like a raving lunatic. Roddy McDowall, another actor I have very little time for, fares rather less well in this respect, as an overacting psychopath who is not for one second a nice guy. At one point, he declares that he hates the entire world because it's flat!

Apart from Robert Mitchum, the acting honours have to go to Yaphet Kotto. The aspect of its well-meaningness this film handles best is its inclusion of a major black character by way of what is nowadays called "diversity". Kotto's bartender is a believable black man in a white man's world forced to take a a slightly subservient job, who is nevertheless good, brave, and competent, and, though not perfect, is still better than almost all the white men, and is both liked and respected by most of the significant white characters who aren't horrible. And a major plot-point hinges upon how out of character it is for him to appear to be cowardly or superstitious.

The heavily contrived whodunnit aspect of the film doesn't work anything like as well. I'm not going to reveal who is murdering everyone involved in a certain unfortunate card-game, but it wouldn't be much of a spoiler if I did, because from a very early stage, this is a whodunnit with an absurdly small number of suspects. By about halfway through you'll be banging your head against the screen and shouting "No shit, Sherlock!", assuming you still care.

Overall, this is an over-ambitious late sixties western which drops the ball by simultaneously trying, mostly in a very clumsy way, to appeal to the sensibilities of the times, and by inexplicably dragging in a plot structure which means that the only large-scale gunfight has to come out of nowhere and be provided by characters who exist only for this reason. I'd give it two and a half stars if this site allowed reviews to be entirely neutral, but I'm going up to three because Mitchum and Kotto deserve a nod. I'd probably go up to three and a half if Dean Martin was replaced by somebody less smug, then drop down again because this site doesn't allow three and a half stars either. In the end it's a sort of quite good western oddity which has never been copied, and you can see why. But at least its heart is in the right place.