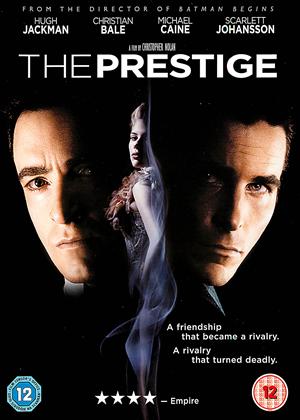 Reviews (7) of The Prestige

The Prestige, the ultimate magic trick!? - The Prestige review by CP Customer

The Prestige tells the story of two magicians who engage in a obsession of a rivalry after an accident causes them to go their seperate ways. The movie itself started off leaving me somewhat confused. It constantly shifts between present time and various past times, telling the story. Everything clears up as you go along, as I think the director wanted it to be that way. Sorta like a real magic trick, always throwing you off to keep you guessing. I never really felt like it dragged on, it kept my attention and interest very well. I liked how the story constantly shifted between Bale and Hugh Jackman, and how they each tried to get the others secrets. It really made you think who really is the "bad guy" in all this. The acting is on point, and the ending is really a bizarre twist that I had to think about some more after the movie was over. You really have to take it from the end and put all the pieces together again to see how creative the director really was. A lot of the beginning was just foreshadowing for the end. It really shows how obsessively dedicated magicians were to their art. They were willing to take and make sacrifies for the art of the trick. Not flawless, but definitely worth seeing.

12 out of 14 members found this review helpful.

A story about rival magicians set in Victorian London. There are numerous plot twists and turns to keep you interested and the ending is awesome. Thoroughly enjoyable performances, especially from Jackman and Bale. Bowie plays a batty scientist well too!

Magic or sleight of hand? - The Prestige review by CP Customer

Story moves at an acceptable pace and the principle characters are well portrayed, but in a style that makes them difficult to warm to. The rivalry between Bayle and Jackman could have been better drawn, each displays an irritating, self-centred character without humour or empathy. Caine doesn't get out of first gear, his and Johansson's talents are not really on view. Bowie's role is also slight. The denouement is flagged up well before it occurs and replaces mystery with absurdity.

Goes on a bit but a good ending! - The Prestige review by CP Customer

I was looking forward to this film. It started and ended great. However, a lot of the middle could lose you, as it 'goes on a bit!' It is quite a dark film too - the ending is cracking though!! Didn't expect it - so I would say it would be worth watching. Don't watch it when you're tired though - you may find yourself nodding off (like my fella did - lol!!)

Wow its Magic - The Prestige review by CP Customer

A superb movie. A brilliant plot and one that kept me totally in suspense and fascinated. How did they do it?? he ending was incredible and my guesses got nowhere near. WATCH IT!

Two rival magicians (Hugh Jackman and Christian Bale) have been digging at each other for years.

As time progresses, the hunt to learn each others tricks of the trade become more twisted and spiteful.

And then the ultimate happens, one kills his rival, or does he?

Sort of like Murder by Illusion set in Victorian times this film sounds like it could be a winner.

It isn't bad, but could have been a fair bit better.

Interesting film that you will finish watching and think “What was all that about” but then your brain will click in and you will see that absolutely everything is an ILLUSION and a clever one at that.  Good acting and it  will definitely hold your interest.