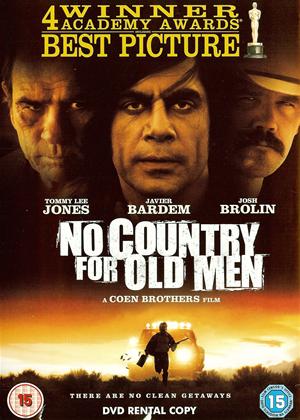 Rent other films like No Country for Old Men

Reviews (10) of No Country for Old Men

What could have been...... - No Country for Old Men review by CP Customer

Let me start off by saying I have not read the book (which this is based on), so my expectations for what this really is was up in the air. That being said, No Country For Old was shaping up to be one of the best movies I've seen in a long time, to end somewhat abruptly with deep symbolism that flew right over my head. The Coen Brothers crafted this masterfully with an incredible cast, great cinematography and atmosphere, pretty ruthless violence (always a plus in my book), and surprisingly a lot of dark humor to keep you engaged from the get-go. Started off simple enough. Guy (Josh Brolin) in Texas comes across a drug deal gone bad to find a load of money and drugs, and a lot of dead bodies. He takes the money, his mistake, because he is then hunted by a psychopathic killer played masterfully by Javier Bardem. I dug the game of cat and mouse. Tommy Lee Jones, an old sheriff, would pop up every now and then to sorta fill in the plot holes. The three of them were great on screen, I can't give them enough props. It was done so well, one thing I noticed is they just used the sheer magnitude of their presence to back the story, as there was no musical score at all in this movie. I liked the feel they were going for. It just made it seem more gritty and real (unusual for me because I love a strong musical score to back scenes along). Everything was pretty linear for about 4/5's of the movie, and I was anxiously anticipating the resolution, but it really just never came. They shifted focus towards the end and to be honest, I was kinda baffled. It went from a linear approach to heavily dialog and symbolism I wasn't anticipating. I like a more straightforward movie, so I didn't put too much thought into what they were trying to go for, but at the risk of spoiling the movie from speculation, I'll just leave it at that. Bits and pieces of brilliance that goes for a twist at the end I didn't connect with. Looking at the title, one could deduce that simply country was getting outta hand, passing by old timers like Tommy Lee, but it still left me with a lot of questions. Maybe the questions were irrelevant, but that wasn't my expectation. All in all, this is definitely worth seeing though. Maybe others will dig what the Coen Brothers were going for at the end. All I can say is..so close to being the years best movie.

Brilliant - No Country for Old Men review by CP Customer

Deserves the accolades and awards, especially Bardem for his genuinely scary and menacing hit man. Superb scipt and masterfully understated acting. Brolin and Lee Jones are also brilliant, as is Harrelson in a fairly small, but memorable, role. The direction must be outstanding to get these performances from the actors. A joy to watch, although the extreme violence may put some people off. However, in a film with a theme of drugs/hit men, what do you expect?! Kept us fully engaged, although the ending is a bit unexpected. However it kept us guessing and opened up lots of discussion along the lines of "what happens next".

I was reminded of Men in Black not because of Tommy Lee Jones but because Javier Bardem plays a character who kills in the same way as the alien cockroach, with total apathy. Personally I don't find this dramatic; wooden acted killers are clichéd. The Coen brothers seem to have a style of bringing out the domestic familiarity in characters. Although distinctive I am not a particular fan and do not think that this film deserved so many accolades. It is without doubt tense in parts with some good shoot out scenes but the plot is patchy, sometimes slow. The redeeming feature is TLJ, always worth an audience.

I found this film intriguing. With its occasional twists, the plot manages to keep the viewer slightly off-balance - not enough to confuse but just enough to defeat one's expectations. The result is an unpredictable yet compelling film. Although in parts violent, these scenes are to my mind essential to support the theme of an old fashioned cop finding himself out of his depth in the ruthless new world of the drug trade.

OMG - No Country for Old Men review by CP Customer

What an awful movie, no real ending and unless you are able to grasp the Texas whine its an ardous task to deduce what they are saying.

Great Films - No Country for Old Men review by Mitch

Javier Bardem is creepily awesome in this film. Tommy Lee Jones gives a great performance as the beleagured old-school cop who is becoming weary of the escalation of violence and crime committed around him. Great film, worth the watch.

If you enjoy tension in a film, then this is for you. Typically Coen Brothers. If you like predictability and a happy ending, then don’t bother. Brilliant.

Crazytown guy - No Country for Old Men review by NC

Off its type, is one of the best. Menacing and well photographed. Tommy does his thing, and Javier trumps everything. Is hard to take your eyes off him.

excellent but? - No Country for Old Men review by CP Customer

at last a 'good film' full of good actors in great roles,not fully sure on the direction? there are one or two sections that needed to be seen! and therefore left you deprived of conclusions,deliberatly? not sure, but ultimatly spoiled the full 'taste' of the film,

deserved its awards and more,

still I feel that somewhere theres a special dvd version to come, with at least 40 mins 'restored'??? that WILL be a treat,

thats the feeling it left me with, but honestly rent this , you wont be too disapointed,''this does waht it says on the tin''!

This is a very stark view of a cold bloodied world

where crazed killers kill with glee and gusto.I

found it gory and a trifle pointless.