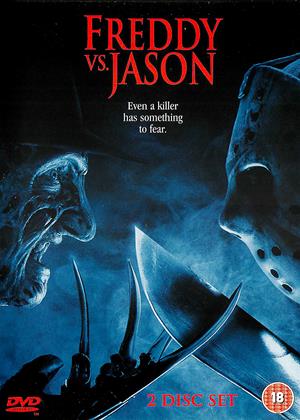 Synopsis:
Get ready for the ultimate showdown! It's been nearly ten years since Freddy, from the 'Nightmare on Elm Street' series, invaded people's dreams to exact his deadly form of revenge and murder. But now, his memory has been systematically erased by a town determined to put an end to Freddy (Robert Englund) once and for all. Until, that it, Freddy resurrects Jason (Ken Kirzinger), the equally iconic madman from the 'Friday the 13th' series. Jason is the perfect means for Freddy to once again instill fear on Elm Street and start a new reign of terror. But as the bodies begin to pile up, he discovers that Jason is not willing to cease his murderous ways and step aside so easily.
Now, with a terrified town in the middle, the two titans of terror enter into a horrifying showdown of epic proportions.
Actors:
Robert Englund, Ken Kirzinger, Kelly Rowland, Monica Keena, Jason Ritter, Chris Marquette, Brendan Fletcher, Katharine Isabelle, Lochlyn Munro, Kyle Labine, Tom Butler, David Kopp, Paula Shaw, Jesse Hutch, Zack Ward, Garry Chalk, Brent Chapman, Spencer Stump, Joëlle Antonissen, Alistair Abell
Directors:
Ronny Yu
Producers:
Sean S. Cunningham
Writers:
Wes Craven, Victor Miller, Damian Shannon, Mark Swift
Studio:
Entertainment In Video
Genres:
Classics, Horror

Sign up
Friday the 13th: Part 5: A New Beginning

Reviews (1) of Freddy vs. Jason

Very much in the spirit of early team-ups that begun with ‘Frankenstein meets the Wolfman (1942)’ (with Jason as the lumbering Monster and Freddy Krueger as the more lithe, even sinewy Wolfman – and it maybe coincidental, but their fiery ‘demise’ on a boardwalk is reminiscent of the Monster’s final death in the Universal films, namely 1948’s ‘Abbott and Costello meet Frankenstein’) ‘Freddy vs Jason’ is enjoyable very much as a ‘romp’, which makes it surprising to me that we are reminded quite graphically of Freddy’s penchant for juveniles. (“Freddie’s coming. He loves children, especially little girls.”)

Firstly however, we are introduced to the usual array of teens, vile in every way except cosmetic – after all, this is a ‘celebration’ of Freddy/Jason films, so it wouldn’t do to miss out on this particular staple. Some have returned from a previous entry, others are a new breed of laconic vacuousness; more ghastly than either of the titular monsters, it isn’t long before they are despatched, one by one, to the relief of much of the viewers.

Considering Freddy had assumed increasingly jocular and bizarre brief alter-egoes over the many sequels, he is, if anything, comparatively restrained here; apart from outsized shadows, he appears as a drug induced caterpillar, but that is the only concession to his wilder, younger days.

Of course, we really want to see the two Big Names fight. And fight they do, in a series of terrific set-pieces. Krueger is frustrated by Jason killing Freddy’s victims before Freddy does, and violence erupts between them, first in the dream world where Freddy resides, and then in reality. The self-mocking tone of earlier scenes is replaced with good old fashioned (or new fashioned, as there are plenty of CGI enhancements) fisticuffs. After many scripts were rejected for this, it seems the producers were more than happy with a thin, straight-forward knock-about instead of the more spectacular, intricate ideas originally discussed.

Neither Jason nor Freddy are victors, and yet perversely they both are – however, this is their last throw of the dice to date. It would be seven years before another Freddy film was attempted, but this was a spineless remake of the 1984 original and offered nothing new.