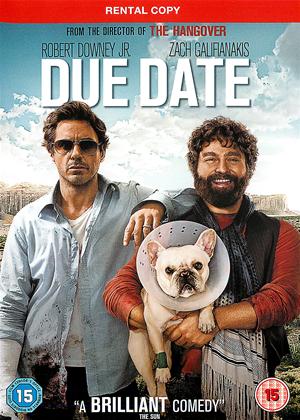 This is a genuinely funny lightweight movie - essentially a road trip with a straight guy and a mad guy being forced to travel to LA - tghey're thrown together and go through the usual ups and downs a la Planes, Trains and Automobiles. But it is really funny in parts - of course, there's a silly sentimental ending, as per usual in Hollywood. But, unlike most Hollow-wood 'comedies', this is actually occasionally funny! Some great set ups and some great lines allow the actors to milk every situation and ham it up wonderfully. One of the better comedies of recent years. A nice, easy, funny film to destress to. And the scene on the plane is hilarious!

well that was an enjoyable way to pass a couple of hours, don't reckon they'll get any oscars but it was fun

When Robert Downey Jr.’s Peter Highman is blacklisted from flying, he is forced to catch a ride with a bizarre and eccentric man by the name of Ethan Trembley (Zach Galifianakis). What follows is a cross-country road trip that loses itself in mediocrity.There isn’t much here that breaks the bank and introduces something new. Robert Downey Jr. plays the smooth talking confident man that he always plays, and Zach gives voice to insanity.

What worked well in The Hangover fails here. Zach was able to bring to life a character whose craziness is believable. Here, Zach seems to be playing a character more so than in The Hangover. His effeminate characteristics and passion for his boston terrier seem like devices and tools for comedy rather than honest character traits.

Nevertheless, the sheer absurdity of the character and Zach’s full commitment to the role produce some laughs throughout the 95-minute run-time of the movie.

Adding in a slight side-plot of Peter’s friend Darryl (Jaime Foxx) possibly being the father of Peter’s soon-to-be-born child gives the film a bit of depth. But it shallows out again by the end of the flick when everything that happens is as expected for this type of movie.

Due Date isn’t a bad flick, but it doesn’t bring anything new to the genre. The chuckles aren’t frequent and the guffaws not hearty enough.