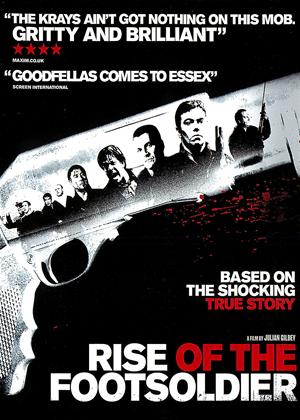 Synopsis:
Hooligan. Gangster. Legend. This British crime epic charts the inexorable rise of Carlton Leach from one of the most feared generals of the football terraces to becoming a member of a notorious gang of criminals who rampaged their way through London and Essex in the late eighties and early nineties. The story spans three decades: from football hooliganism through to his burgeoning career as a bouncer, his involvement in the criminal aspects of the early ‘rave’ scene and subsequently to his rise to power as one of the most feared and respected criminals in the country.
As his notoriety increased, Leach became entwined in a violent series of events, which culminated in the Rettendon Range Rover murders of 1995, one of the most infamous staying in British Gangland history. This is his history.
Actors:
Rikki Harnet, Terry Stone, Craig Fairbrass, Roland Manookian, Coralie Rose, Neil Maskell, Billy Murray, Ian Virgo, Kierston Wareing, Patrick Regis, Lara Belmont, Emily Beecham, Andy Linden, Frank Harper, Jason Maza, Mark Killeen, Dave Legeno, Dhaffer L'Abidine, Mitchell Lewis, Eden Ford
Directors:
Julian Gilbey
Writers:
Julian Gilbey, Will Gilbey
Studio:
Optimum
Genres:
British Films, Action & Adventure, Drama, Thrillers
Countries:
UK

Reviews (2) of Rise of the Footsoldier

For some unknown reason, I re-watched this the other night. It's at best run-of-the-mill, but it is one of the better 'Essex gangster' films dealing with the events around what are known as the Rettendon murders (look 'em up on Wikipedia). It's not a great film, so why I watched it again I'm really not sure...

The film is adapted from the autobiography of one Carlton Leach and is told in a pseudo-documentary style, with voiceover commentary from the actor playing Leach. He started his career of violence in the 1980s on the terraces of West Ham, as one of the hooligan members of the notorious InterCity Firm, so called because they took the regular train to away matches, where they met rival firms (=hooligan gangs) from the opposing team for brutal punch-ups.

He graduated from that to running a firm of club doormen, then to other 'muscle' jobs, to drug using, to drug wholesaling, fell in with Essex gang leaders, finally being on the inside track to knowing the truth (?) behind the Rettendon murders. The film shows three possible scenarios for the killings, one of which was that used to convict two men of the murders.

It's not a great film, but the first 15 minutes dealing with football hooligans does have some of the most brutally realistic fight scenes that I've seen on screen - it makes other films dealing with the 1980s hooligan firms look like kids' stuff.

I'll give it 2/5 stars, then raise it to 3 stars because of the dreadfully realistic first 15 minutes.

reminded me of essex boys