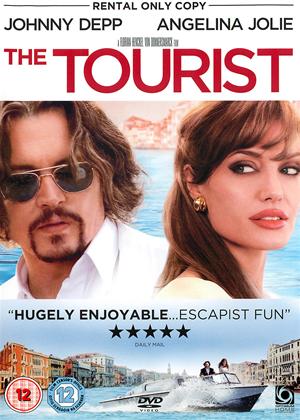 Reviews (4) of The Tourist

Depp and Jolie are both great actors who are always extremely watchable. This is a light hearted but extremely engaging film - if James Bond had been born female, this might have been the result!

So bad I did the ironing instead... - The Tourist review by CP Customer

...I would rather have watched repeats of 'Jim Davidson's Generation Game' it was that bad. Still I got my ironing done ... so one good thing came of watching this film.

What a dreadful film ! The more Jolie wiggled and tried to look sexy, the more ludicrous she looked, also did they have to paint that huge mouth of hers brilliant red - good grief. I am surprised that Depp agreed to take part in such rubbish. I give it one star as Jolie's clothes were gorgeous - half a one would be more appropriate.

‘The Tourist’ is a romantic thriller flick directed by Von Donnersmarck. Frank (Johnny Depp), an American tourist, meets a mysterious stranger named Elise. Frank is immediately attracted to her and starts his flirtations. Elise is actually sent by a guy named Alexander Pearce to make the rival gang believe that Frank is Pearce. Thus, a cat and mouse game begins which leave Frank on the run.

The main plot of the movie involves various sub plots where Pearce has unfavorable dealings with mobsters. However, the prime importance is given to the romantic scenes brewing between Frank and Elise. The plot is very much predictable and there are no wild twists in it. Some of the scenes like gangsters and police chasing the wrong guy, and romance in between a wild chase are very much clichéd.

The performance by the lead actors as well as the supporting actors is good. Johnny Depp as the American tourist Frank looks quite convincing.

Angelina Jolie plays Elise, the one who is sent to trap Frank. Her expressions add to the mysterious nature of the character she plays. Other major actors Paul Bettany and Timothy Dalton have also done a fabulous job in this movie.

Despite having an ensemble cast, the movie suffers due to bad plot. The story progresses in an interesting way but the whole plot is so predictable. The film also has some interesting fight sequences that are done to perfection. The movie relies heavily on the star cast and they make it entertaining.