Rent Hatchet for the Honeymoon (1970) 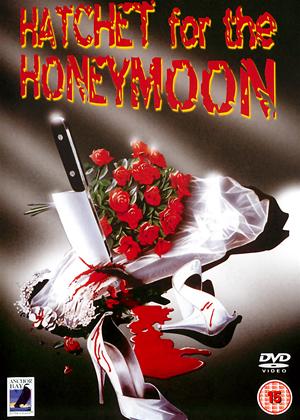 Reviews (1) of Hatchet for the Honeymoon

Spoilers follow ... - Hatchet for the Honeymoon review by NP

After the splatter-coloured opening credits, action man John Harrington (Stephen Forsyth) introduces himself in a voice-over as a paranoiac. Seemingly trapped in a loveless marriage with a wife who will not let him go, he is haunted by psychedelic dreams of some childhood trauma that seem to be tipping him towards murder. I describe him as an ‘action man’ not because he commits acts of great physical prowess, but because his perfectly manicured, coiffured, extravagantly made-up appearance makes him look like a male doll. Despite the distraction of his exquisitely chiselled features, Forsyth is good in the role, and throws himself into the character’s apparent lapses into violent insanity.

Director Mario Bava emblazons the picture with lush, packed visuals, much use of garish colour and hallucinogenic effects and the rasping musical strains of Sante Romitelli. He even at one point has the characters watching a scene from his own ‘Black Sabbath (1963). Although I feel that Bava’s style is too garish and brash to generate any real sense of horror – and I realise I am in the minority with this – Harrington’s continual confusion as to whether his wife is haunting him or not is well conveyed. With no real answers forthcoming, it is a genuine mystery as to what quite is going on.

While the regularity with which his dead wife appears and disappears threatens to get monotonous, this remains a solid entry into the giallo genre. If you are a fan of Bava’s work, there is undoubtedly much to enjoy here. As an entirely personal note, I find his style too stylised for my tastes and tends to obscure, instead of enhance, the mood.