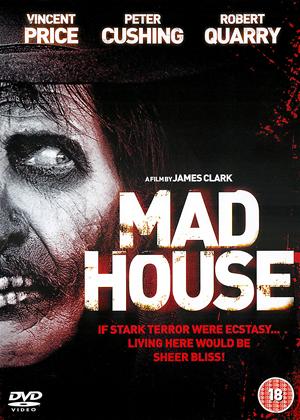 Synopsis:
PaulToombes (Vincent Price), veteran Hollywood horror film star, is making a comeback in a new TV series based on the old "Dr. Death" movies which first made him world famous. The trouble with Paul is his past. A beautiful young actress to whom he was engaged to be married was found murdered in strange circumstances. Although acquitted after standing trial for the killing, Paul's career was shattered and the breakdown he suffered left him an unbalanced wreck. Now twenty years on, his old actor-friend Herbert Flay (Peter Cushing) welcomes him back to the role. But the curse of Dr.
Death strikes again as a series of gruesome murders drag Paul into his past and he begins to wonder if he is in the grip of impulses totally beyond his control.
Actors:
Vincent Price, Peter Cushing, Robert Quarry, Adrienne Corri, Natasha Pyne, Michael Parkinson, Linda Hayden, Barry Dennen, Ellis Dale, Catherine Willmer, John Garrie, Ian Thompson, Jenny Lee Wright, Julie Crosthwaite, Peter Halliday, Boris Karloff, Basil Rathbone, Hyma Beckley, George Blackler, Robert Cawdron
Directors:
Jim Clark
Producers:
Max Rosenberg, Milton Subotsky
Writers:
Angus Hall, Ken Levison, Greg Morrison, Robert Quarry
Studio:
Altitude
Genres:
British Films, Classics, Horror
Countries:
UK

This is one of Vincent Price's least-known films, probably because it's an attempt to replicate the formula of several of his better-known movies, especially "The Abominable Dr. Phibes", with much lower production values and a very weak script. However, on the plus side, it focuses almost entirely on Vincent Price himself in the rôle of a horror film actor who is at least half nuts (considerably more so towards the end) and may or may not be a serial killer, so basically if you enjoy seeing good ol' Vinnie giving it his usual shtick with no holds barred, there's a great deal of fun to be had.

Peter Cushing, who's almost certain to give at least a thoroughly reliable performance (so long as he isn't in a film involving Daleks), is up to his usual standard, but for somebody billed second, he's not in the movie all that much. Cult favorite Linda Hayden is suitably convincing as a character who might as well be called Doomed Slut. Robert Quarry doesn't really seem to engage with the proceedings at all. And everybody else ranges from hilariously over-the-top to absolutely dreadful, but mostly they're adequate. And making his only appearance in a horror movie, Michael Parkinson is himself, and has no valid reason to be there.

Unfortunately, the murders themselves are very pedestrian compared with the outrageous excesses of the films this one's trying to emulate, and there aren't enough of them. The willingness of several characters to not only harass, blackmail, and generally annoy somebody who dresses like V For Vendetta's evil twin, believes himself to be a fictional psychopath called Dr. Death, and has killed several people already, but follow him into dark isolated places on purpose suggests that this is meant to be a comedy, as does the fact that a TV studio uses fully functional death-traps as props and leaves cups full of petrol lying around all over the place for no reason at all. But apart from a number of standout scenes - the ones they clearly spent most of the budget on - the writing is very flat and strangely lacking in humor, as if they assumed their leading man could carry the film all by himself. Which, to a very great extent, he does.

All the same, apart from the horribly uneven tone - one murder they dwell on for ages seems gratuitously nasty and mean-spirited - and the excessive use of clips from other, better Vincent Price movies to pad the thing out, provide expensive-looking shots to put in the trailer, and allow them to pretend that Basil Rathbone and Boris Karloff are in the film (this was made by Roger Corman's old company American International, so I suppose that sort of thing is to be expected), it's actually a lot of fun. The Halloween party's a hoot, especially Peter Cushing's choice of costume; I just wish they'd let us hear the Dr. Death Song all the way through. And Spider Lady has to be the maddest madwoman ever! Though seriously, what's with that ending? By the way, if you can't guess who's behind the mask very early on indeed, you simply aren't trying.

Watch this hiding behind your PRICELESS CUSHING. (well maybe not quite) - Madhouse review by Spoons

If anyone else would have been cast in the roles of Vincent Price and Peter Cushing, then I have no doubt that this would have just been another very average horror flick. However with the above mentioned they manage to make this film rise above average status and turn into a very enjoyable movie. If you enjoy old Amicus /Hammer films then this comes recommended.