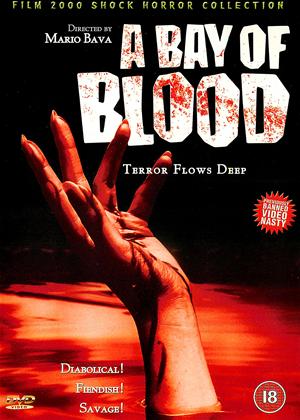 Spoilers follow ... - A Bay of Blood review by NP

How it must have been for a horror film fan to be of cinema-going age in the early 1970s – this is another Italian giallo film that was released into the already bulging world in 1971. Directed by Mario Bava, it contains all the hallmarks – beautiful locations, beautiful people - and someone dressed in black who is killing them all, one by one.

Bava is lauded as an inspirational to many more modern film-makers, which is great. I find his work a little hit-or-miss. Perhaps his reputation goes against him for me; I try not to read reviews of any kind before I’ve seen a film, but it is difficult to avoid Bava’s status. Perhaps if he were not so revered, I’d (unfairly) be more open to appreciate his work.

That said, this unquestionably contains some gruesome moments and handsome set-pieces for the growing number of killings. Stelvio Cipriani’s very rhythmical soundtrack plays its part in cultivating the unnerving moments too.

As always with Bava, colour is very important. Garish and lurid, even when muted by day-for-night, it presents my main issue with his work. It is too stylised, giving a stage-bound feel, even on location. Such starkness also robs the sumptuous locations of their natural atmosphere and charms.

The story revolves around the lengths people will go to safeguard what they as their inheritance. It’s a thin plot, hardly elevated by a very contrived ending. As giallos go, it has enough memorable moments to make it worthwhile (my favourite involves daft and giggly Brunhilda (Brigitte Skay) skinny-dipping, when a bloated corpse brushes against her – dissolving into hysterics. Her fate is also soon sealed), but it is far from the most compelling in the genre.