3.7 of 5 from 49 ratings
Unknown
Sign up
Play trailer
Gallery 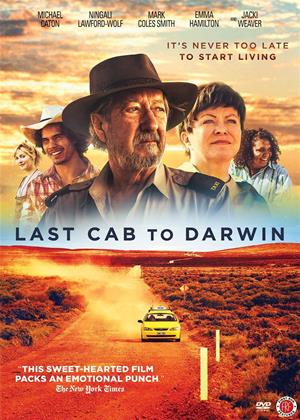 Synopsis:
Rex (Michael Caton) is a cab driver who has never left the mining town of Broken Hill in his life. When he discovers he doesn’t have long to live, he decides to drive through the heart of the country to Darwin, where he’s heard he will be able to die on his own terms; but along the way he discovers that before you can end your life you’ve got to live it, and to live it you’ve got to learn to share it...
Actors:
Michael Caton, Ningali Lawford, Mark Coles Smith, Emma Hamilton, Jacki Weaver, John Howard, Alan Dukes, David Field, Kelly Butler, Elliott Weston, Brian Taylor, Jeremy Cumpston, Christopher Stollery, Andrew Ryan, Mercia Deane-Johns, Shareena Clanton, Brendan Cowell, Leah Purcell, Kirsty McGregor, Pauline Chatt
Directors:
Jeremy Sims
Writers:
Reg Cribb
Genres:
Action & Adventure, Comedy, Drama, Romance
Countries:
Australia

Reviews of Last Cab to Darwin

Last Cab to Darwin is one rare case where Australian films get their fair share of local credit they deserve, reflected through racking 7 million dollars in total box office sales. Though negligible in most cases, this fact strongly vindicates Last Cab to Darwin’s rise to local cult status, since it’s one of those rare instances where a play adaptation surpasses the material that it’s based upon. Therefore, in all sense of the saying, director Jeremy Sims blew this one out of the water completely.

Michael Caton plays Rex, a 70-year old man who, after finding out he has an incurable disease – embarks on a final quest to find a doctor in the city of Darwin who can supposedly help him ease his suffering. During which, he meets strange and new characters who show him how beautiful life can be even for those finding themselves in life’s dusk with nothing to lose.

As hard a subject Last Cab to Darwin carries, it’s still an Aussie comedy after all which for some can be hard to grasp – especially American audiences and others unfamiliar with the Aussie kind of humor (as opposed to most generic American comedies who tackle nothing more than mundane subjects in their core). Last Cab to Darwin is sentimental, sad, but also funny – mostly in how Rex perceives different people whom he never got the chance to previously meet. Rex has also never been outside of his native town in his life, so this epic journey of his resembles a monomyth from which his apotheosis inevitably happens.

As Rex experiences the Australian dusty plains through a window in a cab, we the audience can see it clearly and in all its glory. In some way, these endless roads can be interpreted as a purgatory through which Rex must pass in order to arrive to the ‘other side’. Take it as you will - Last Cab to Darwin’s symbolism often extends well beyond what’s merely presented on the screen.

Side characters have their moments: from the Aboriginal Tilly (Mark Coles Smith) to a mischievous nurse called Julie (Emma Hamilton) – all accompany Rex in his final moments of life. Whether he agrees with their stances is a question for another time, and makes for a great conflict in a movie with no real antagonists except the one all humanity fears the most – death itself.

The cinematography is gorgeous, filmed in a way to perfectly convey how Rex feels in his final hours of life. Some would think it depressing, but it’s far from: Rex’s existence is important to only how he perceives himself and to an extent, others around him. If you can handle heavy subjects on a personal level, and have your box with tissues up and ready, then feel free to go delve into this gem of a movie and experience it for yourself the way it’s meant to.

Finally, Last Cab to Darwin is well worth your time.