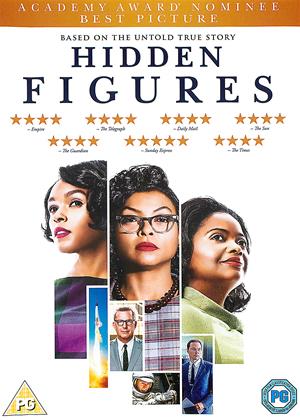 Even if Hollywood has taken liberties with the truth, the whole truth and nothing but the truth, oh for heaven's sake, this is a story that needed to be told and full marks to all those involved with bringing it to the big screen. It was interesting to think of the word "computers" meaning people who compute, rather than the machines that do so. My husband and I thoroughly enjoyed this film and have recommended it to our friends and family, including those in the USA. The extras give some good background too.

My partner and I both really enjoyed this film - had tones of the Imitation Game and the actors took you on the journey with them. An interesting view man got into space using human computers ! would recommend x

Entertaining - Hidden Figures review by AS

A good film, well-acted and entertaining. Films are generally for entertainment, if you are looking for historical accuracy, then I would suggest watching a documentary or reading a history book. I would no more expect complete historical accuracy from a film, than I would expect to get a lesson in British History from Shakespeare. A good film to watch on a Saturday night though.

True or not? No comment - Hidden Figures review by LE

This was a first class film, telling a good story. To what lengths the story was true or not wasn't my concern. The film expressed some naked truths of the time (e.g. Black v White toilets) and described the undervalued position of black people and women well. Octavia Spencer was excellent and I remember her being very good in 'The Help'.

The subjects of this deserve better than this "us versus them" treatment. Why are all the other NASA employees stereotypically bigoted? Oh, and then they miraculously soften up by the end. Don't insult my intelligence!

Another little story from the past. Bit like all the Spitfires being delivered to airfields by ladies. Three very clever ladies. Well acted

Emily Pankhurst started the suffragette movement which lead to the emancipation of women. Well they have a few more rights now, but the glass ceiling is still there. Just as the abolition of slavery has not lead to racial equality as it should have. This film touches on both these aspects and tells an important story. There are some women who are cleverer and more capable then most men, but men still get the top jobs. Very few who are not white make it to the top, with a few exceptions.

This tells the story of the computing unit, an office of women used for calculations before the advent of computers as a routine office tool. It shows how their work was vital in NASA' role in the conquest of space. It shows how women, particularly black women, were treated in the work place in the 50s. It also shows how NASA strove to improve things with Kevin Costner playing his part. I do not know if this is accurate; I am not American and I was busy trying to make my way in the world at the time, but I can believe it. The film ending credits give credence to the acceptance of these heroines, but why did it takes so long for this story to come out.

I would really recommend this true story of sensational ground breaking women. Great performances but all.

Putting the historical accuracy’s to one side (this is Hollywood after all) it’s a great film for a Saturday night. There are no surprises in the plot but it’s well acted and the story moves along at a nice pace. Thoroughly recommend, not sure why there are downvotes for it as it’s pretty clear what the film is about.

To an extent this film was about segregation for dummies - i.e.written in a juvenile and predictable way - to those of us who lived through

that era at least. Nevertheless entertaining in an unexciting sort of way.

Wonderful movie which we both loved. Uncomfortably true in places but characters were believable and all had great portrayals. Really really enjoyed it and sad when it was over.

The space race stories of NASA scientists Katherine Goble Johnson, Dorothy Vaughan and Mary Jackson went untold for decades until a few years ago. They proved to not only be trailblazers in their field during a tough time of racial discrimination in America, but also crucial to the success of NASA’s first manned space launch. This is a fascinating story that deserves to be known more widely in the areas of both history and science. And while this movie will make these historical figures more notable and inspirational for years to come, it does so with a movie that is more crowd-pleasing than crowd-informing.

I can’t exactly say I blame director Theodore Melfi for taking such a route, presenting a film that evenly touches on the racial issues, the hard science and the character dynamic. The leading ladies of Taraji P. Henson, Octavia Spencer and Janelle Monáe do an admirable job of portraying Katherine, Dorothy and Mary respectively. They play off each other well that it’s a shame we don’t see more scenes with them together outside of driving to work together or attending a church function. The three of them work in entirely different fields at NASA, leading me to believe they had even less interaction in real life than they do in this film. I almost wish the movie would have lied some more so we could see some of this trio playing off one another.

The arc focused on most heavily is Katherine’s as a mathematician that proved her worth and then some to her tough-but-fair department director Al Harrison (Kevin Costner). She has enough smarts to calculate the toughest of equations, even under the down-lookers of her uneasy co-workers not comfortable with a black woman in their bullpen. It’s still a challenge though, especially when the only bathroom for colored people is a mile away. Of course, Costner must come to the rescue and smash the Whites Only sign to state how we all pee in the same toilet. It’s a scene that is both funny and powerful, as with nearly every scene that tries to be entertaining and historic.

Katherine’s arc is so strong that it’s surprising the movie wasn’t solely her story. Dorothy’s tale of becoming a supervisor of NASA’s first computers is interesting and worth noting, but not nearly as intricate to carry an entire picture. Mary’s struggle with attaining a degree to become a top engineer feels as though it’s from another movie as her story doesn’t seem to conclude with space launch and is mostly forgotten amid the stronger scenes. Also wedged into the story are the racial riots of the time, but seen more from a distance as not to distract from the simpler struggles of trying to be promoted in NASA and pee in the same building. We don’t see much harassment in the streets, but we see plenty of Jim Parsons as a softly racist engineer trying to undermine Katherine and failing every time.

The movie is still very strong, however, when it focuses more on the science angle and less on trying to be all-encompassing of the racism of the era. It’s exciting to be caught up in the excitement of Katherine’s math, scribbling on a chalkboard as the music builds towards the inevitable snap of the soundtrack as she circles the answer. There’s plenty of tension as the rocket launches and the directors make the tough call of whether or not to accept Katherine’s choices of trajectory. For as strong as the movie forces us to cheer for every single scene, it’s impossible not to be caught up in the plucky and determined nature of these women that did amazing things.

Hidden Figures has already been promoted as a must for the classroom; several schools were given the chance to view the movie for free in theaters and are even being offered the movie on DVD for free to be seen in classes across America. And, yes, it is best suited for schools that want to hit a triple-hitter of covering science, history and female empowerment all in one neat little package. If the movie can inspire to such lengths, then it’s a littler easier to look past its made-for-moms format of pushing for a soft and cheer-worthy approach to such a powerful aspect of NASA history.