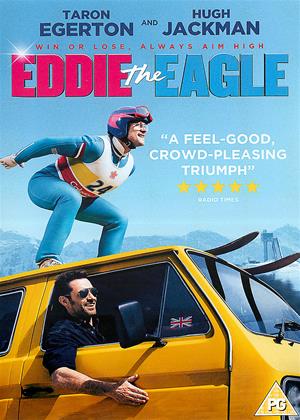 Reviews (9) of Eddie the Eagle

I enjoyed this film. So yes, I know how film makers will exaggerate things to fit the story - in this case that make out Eddie the Eagle to be utterly useless (when in fact he was in the UK ski team before he became a ski jumper - as he said himself on a recent radio show plugging his book).

But film makers will always do this to make the eventual success all the more wonderfully improbable (think ONE CHANCE about Paul Potts which also played fast and loose with the facts). Films lie. That's why they work. They're fantasy.

One does wonder if the barriers from the UK Olympic committee were put up as shown here - but the blueprint if to keep adding obstacles that the hero overcomes and so he does. I remember 1988 and how Eddie the Eagle was front page news.

Some good jokes and acting - Hugh Jackman impresses as a hard-drinking old lag ski jumper, and there's a brief role for Christopher Walken too. UK actors include Keith Allen as the Eagle's dad and Jim Broadbent as the BBC commentator. Directed by Dexter Fletcher (the boy in The Elephant Man + much else besides).

Fun to see the 1970s on screen in the scenes of Eddie's childhood.

An enjoyable and snowy fantasy - 4 stars.

A story of a man fulfilling his boyhood dreams. Obviously the filmmakers have made some additions and stretched the truth a little but it does not detract from making this a very enjoyable family film with humor , drama and an inclination to root for the hero against the "establishment ". A feelgood film - and no swearing ! Recommended.

Enjoyable tale of little man with big ideas achieving his goal, humerous in places, but its not a comedy.

No doubt the film makers added a few bits of their own, and overplayed the opposition he is supposed to have faced.

Heart warming story about hard work and celebrating dreams coming true rather than winning. Refreshing concept with warm humour. Avoids slap stick and has some amazing filming that makes you realise how dangerous and scary a sport this is. The extras are worth viewing. Interesting that the film makers were not allowed to use the type of skis used in the 80s as too dangerous.

Until he delivered his record jump at Calgary, he was regarded by many as a joke, but secretly admired. When he delivered his new British record he became a hero and demonstrated that the true Olympic spirit is about taking part and doing your best, winning is not the main aim, it is only for those already at the top.

The film makers were keen to make a film that didn't just play up the comedy but showed respect for what he achieved, and this they have done. Eddie Edwards was involved in the making and approved the script.

great, fun film based on a legend - Eddie the Eagle review by JD

Probably not really worthy of an 80% 4 stars, for one i feel the direction wasnt actually that good. However, in an age of films carrying political undertones, playing to the broadest demographic for the highest return or a director/contributing actor simply laying it on thick for an oscar this comes as a welcome change of pace. It just pure fun around the story of a crazy - but incredibly determined Olympian.

He only had 1 year with obstacles and no backing to learn his art. Even tho he came last everytime, he had the heart of a champion (nicely portrayed with a conversation with the champion near the end).

Ill admit to always seeing him as a joke, but this film humbles us all by, despite the likely made up bits, telling us the story of a kid with a humble background, a gammy leg and dodgy eye sight doing things few would dare - let alone do competitively. 7/10 for the film. 10/10 for the hero.

Eddie the eagle - Eddie the Eagle review by JC

Uplifting and inspirational film although not much of the film is actually reflective of the true story. As fiction it's a brilliant film with great performance from the actors.

The ultimate high-concept movie. Just as you can’t dislike real-life ski-jumper Eddie himself, you can’t dislike this film. There’s a feel-good story, Taron Egerton strikes the right affectionate note as Eddie, coach Hugh Jackman adds a mismatched buddy-movie vibe, the dialogue sparkles, the ski-jumping is exciting and the scenery is picturesque. You’d have to have a heart of stone not to cheer when Eddie tackles the climactic jump.

What could have been another boring slice-of-life bio becomes in director Dexter Fletcher’s hands a lively and irresistible film. There’s not a dull moment in it. Even if you think you won’t like this film, it will win you over. It’s an antidote to cynicism.

Equally inspiring and watchable are the three Making Of features on the DVD. One shows legendary action director Vic Armstrong’s thrilling work on the ski jumps, which includes him sending two skiers with bodycams down the jumps at the same time.

Whole family enjoyed this one - Eddie the Eagle review by ST

Was a nice movie for us all to watch together. I am hoping it was factually accurate. Great to see such resilience and perseverance, I had no idea of the back story. Loved watching some of the extras too.