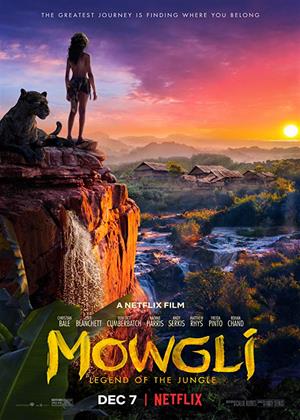 Synopsis:
The story follows the upbringing of the human child Mowgli, raised by a wolf pack in the jungles of India. As he learns the often harsh rules of the jungle, under the tutelage of a bear named Baloo and a panther named Bagheera, Mowgli becomes accepted by the animals of the jungle as one of their own. All but one: the fearsome tiger Shere Khan. But there may be greater dangers lurking in the jungle, as Mowgli comes face to face with his human origins.
Actors:
Christian Bale, Cate Blanchett, Benedict Cumberbatch, Naomie Harris, Andy Serkis, Peter Mullan, Jack Reynor, Eddie Marsan, Tom Hollander, Matthew Rhys, Freida Pinto, Rohan Chand, Keveshan Pillay, Louis Ashbourne Serkis, Moonsamy Narasigadu, Soobrie Govender, Gopal Singh, Kista Munsami, Mahomed Araf Cassim, Riaz Mansoor
Directors:
Andy Serkis
Writers:
Callie Kloves, Rudyard Kipling
Genres:
Action & Adventure, Children & Family, Drama

Sign up
Lily's Driftwood Bay: Message in a Bottle

I can still recall around the same time Disney was developing their live-action Jungle Book film that Andy Serkis was also working on his own Jungle Book movie. The film was smartly pushed away from being released so soon after the 2016 Disney hit to avoid the comparison and confusion. But did it? The more I think about that 2016 film, the more affection I have for its amazing craft in assembling astounding visuals of the jungle with a great cast to back it up. Being so revered, I can’t help but compare Mowgli to The Jungle Book. And it doesn’t fair well.

But let’s be fair and take the film at face value. Serkis’ take aims to present a more character-based version that focuses more on the dynamic of the jungle hierarchy than the grandiose of its beauty. Possibly because it can’t compare to the spectacle Disney had to offer. Serkis devotes a lot of his time into directing the actors to deliver decent performances, even if they feel very off. Consider Christian Bale providing the voice of Bagheera, the panther that finds the man-cub in the jungle, feels truthful and genuine but without much personality in the animal itself. There’s little creativity in Serkis’ attempt at voicing the big bear Baloo, despite his best efforts to make the bear look and sound like thick accented English grump at a pub. Benedict Cumberbatch provides the voice of the tiger Shere Khan in a very bland villain snarl. And Cate Blanchett narrates as the python Kaa, receiving more lines than Scarlett Johansson had in Disney’s take but with far less appeal.

The story proceeds down the expected route. Mowgli is found and raised in the jungle, the boy being played by Rohand Chan. He’s a capable enough actor but he’s never really given a breakout moment, merely proceeding through the motions required by both the jungle order and the story itself. He’ll struggle to fit in, try to adapt to the ways of man and make a bid to save the forest in a battle of man versus beast. But he’s so pinned to that track that any veering from the grim to find something more fun and pleasing comes off as awkward, especially since most of the humor relies on a small dose of slapstick to keep the energy up.

The most distracting aspect and perhaps the biggest flaw of a production such as this is that Serkis tries too hard to make the animals look like the actors. He tries to match bone structures and facial features so that it won’t look so unnatural to hear his voice coming out of a bear. But in doing so, he makes the film less natural by taking a route better suited for a more cartoony animated film. In trying too hard to make animals look like humans, an odd fusion in genes becomes a distraction at all times, rarely creating the illusion of the jungle. The adaption of human facial features may have boded well for Serkis with his motion capture work on the Planet of the Apes movies but that was because apes share similar human faces. And I can’t imagine it was easy to construct in computer animation an Andy Serkis bear with a twisted up face.

After being shelved for years, it’s easy to see why Mowgli was given an unceremonious debut on Netflix. It’s a picture that feels lost in its design, dire in spirit, and too stuck in its story to ever stop and smell the computer-generated flowers. As Disney continues to become the bigger box office giant and have more free reign with technology, the filmmakers who challenge them need to have a game plan or find a different angle. I wouldn’t go so far as to say that Mowgli is the dime-store version of Disney’s The Jungle Book but it’s hard to shake that vibe with the odd choices in story and animation.